Baton Rouge, LA – The Chivas El Paso Patriots scored 2 late first half goals that were matched by the Baton Rouge Capitals scoring 2 late second half goals to salvage a draw on an extremely hot and humid evening.

The field is reminiscent of the fields that I played on in high school several decades ago.

The Chivas uniform numbers are unreadable more than 30 yards away. The only hopeful identification was via the small numbers on the front of their shorts – but some players didn’t have the numbers.

They play a very Hispanic style of soccer – possession based with quick forays into attack. However, the technical skill was not sharp enough as a team.

El Paso is very efficient scoring 2 goals on their 4 first half shots.

In the 42nd minute against the run of play, Michael Griego scored the first goal. The play began with an explosive run by Francisco De Anda to get past Gui Brandao (Belhaven NAIA). His shot hit the post and rebounded into the center of the box bouncing toward Griego. With the ball at his knee height, and Griego running at the goal, he instinctively brought his heel forward and up to his knee height dropping his knee down to heel flick the ball forward into the goal. I can’t even get my heel that far up. It’s a neat goal that I’ve never seen before.

The second goal was scored by De Anda in the 44th minute. Baton Rouge’s Kyle Wood missed the cross and Griego took a shot, but Wood scurried back to block the shot. De Anda hit a shot from the top of the box to push the lead to 2-0 at that time. 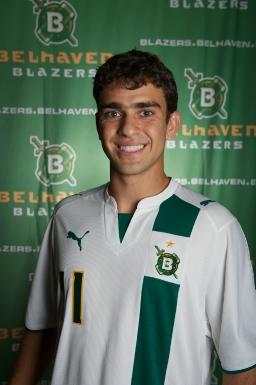 Gui Brandao, Baton Rouge
Griego is a target forward. Late in the second half, he took a Jorge Orona flick header from a Rodrigo Morin corner kick and hit a far post side volley, but the ball hit the cross-bar. Since Griego is by himself up top, he needs to be patient on the ball until his support arrives.

De Anda has blinding speed and he’s very competent technically. I’d like for him to release the ball quicker, but he’s the jewel on this team.

Omar Tena drives his deep diagonal passes from his left back position to change the point of attack.

The central duo of Morin and Orona combine well, but aren’t good goal scorers. In the 26th minute, Orona drove into the top of the box, but his shot was poorly struck. In the 58th minute, Orona played a brilliant diagonal pass to Morin who adeptly calmed the ball before beating 2 defenders, but his poor shot was easily caught by goalkeeper Chip Sanders (Davidson).

Baton Rouge plays too slowly and methodically. It’s too easy to read the play and defend it.

The first goal was scored by Brandon Chagnard in the 81st minute. It was a critical goal after Baton Rouge attacked with purpose for much of the second half bring Baton Rouge within one. The play started with head coach Stuart Hayers getting the ball to second-half sub and assistant coach Luke Sheeky. Sheeky made the pass that freed Chagnard behind the defense. With Chagnard’s first touch, he beat the goalkeeper Ivan Meza and finished into the open net from 10 yards.

General Manager Ben Callon scored the second goal in the 86th minute from a penalty kick. The PK was awarded to Baton Rouge because Griego put up his hand to block Callon’s header in the box. It was an easy call.

Perhaps, Baton Rouge needs more coaches and front office personnel given that the general manager had a goal, assistant coach had an assist and the coach had a secondary assist.

Hayers is not a very good passer. At best, he hustles and he’s tall. He’s clumsy on the ball.

Callon gets lost on defense ignoring opponents running behind him unintentionally unbalancing his defense by only providing tacit pressure. Callon is good on the ball.

Sheeky electrified the Baton Rouge attack with his seeing-eye passes that weighted exceptionally. He’s the best player on the team and he only played 23 minutes.

James Queree (Xavier) had a questionable clearance in front of his goal in the first half. Queree is not an accurate passer while running. Also, he needs to improve his timing on his tackles.

Gui Brandao (Belhaven NAIA) has exceptional quickness though he tends to rely on it rather than tight technical trapping. Brandao is dangerous getting forward. In the 93rd minute, he combined with Callon to get the ball deep in the attacking third and laid the ball off to Francois Navarro.

Navarro missed a golden opportunity in the 44th minute. Queree crossed the ball to Brandon Chagnard who headed the ball to the far post with Navarro converging. The ball hit the post because Navarro didn’t tap it in and the play was over. Navarro combined with Callon in the 27th minute passing the ball to Chagnard at the top of the box. Chagnard had a good turn but his shot hit the post, again.

Navarro needs to get his head to prevent dribbling into problems. In the 47th minute, he hit a rocket from 35 yards that the goalkeeper was able to barely tip over the cross-bar.

Achille Campion (Belhaven NAIA) didn’t provide enough offensively. He had a weak header in the 52nd minute and a soft shot to the goalkeeper in the 70th minute.

I would have liked to see high school junior Ryan Reid play. According to the game day program, he has committed to attend Maryland in 2012.
Headlines
College Rankings HQ
View all rankings >>