England's Euro Stars Grew in the US System 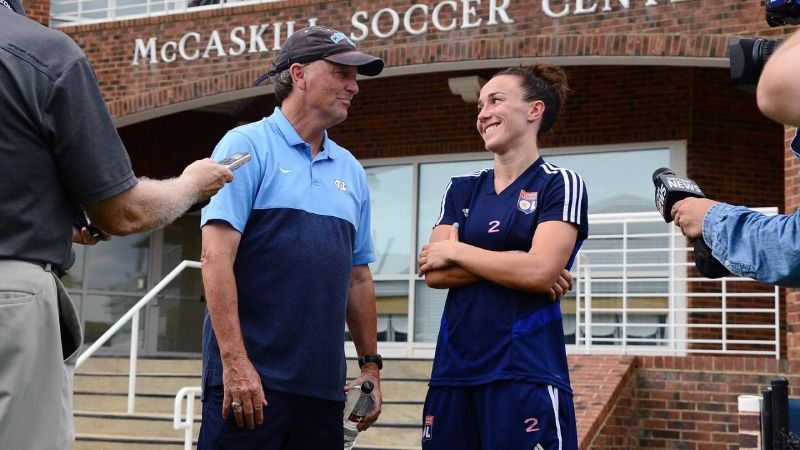 Anson Dorrance can’t keep up with all of the messages. There are emails from media outlets and texts from friends. Newspaper clippings and interviews. All are concerned with the same thing: the England women’s national team 2022 Euro win.

Dorrance coached four players involved with that team, including manager Sarina Weigman. But he’s not the only American college coach who’s overseen the development of the victorious side. A total of six Three Lions squad members attended university in the United States. And as England lifted the trophy following a 2-1 win over Germany, their former coaches felt immense pride. And despite the fact that the players have established stardom across the pond, the college bond remains strong.

“It's beyond rewarding. It's just exhilarating. I am on cloud nine,” Dorrance said.

England relied on an important contingent of former U.S. college students through the tournament. Lucy Bronze, Alessia Russo, Lotte Wubben-Moy and Weigman attended North Carolina. Outside back Rachel Daly starred as a forward for St. John’s. Demi Stokes was an attacking force at South Florida, before shifting to a left back role as a pro at Manchester City.

All six played a role for an England side that won its first major trophy — men’s or women’s — since 1966. Weigman became the first manager to win the Euro Cup for two different countries. Bronze started every game at right back. Daly was equally reliable, holding down the left back spot through the final.

And though their old coaches watched from afar, the final dragged up memories of old: wins and injuries, success and failure. But ultimately, players who were a delight to be around and entirely deserving of success.

“These are a bunch of, you know, graceful, positive human beings,” Dorrance said. “Wht a great story for the English.”

Dorrance loved coaching Bronze. The Northumberland native was ferocious and competitive — a relentlessly hard working full-back. He recalls a 1 vs. 1 tournament, with Bronze matched up against USWNT forward Tobin Heath. Bronze was 17, defending a 21 year old who would go on to become a two time World Cup champion. She tied the game early at 1-1, but Heath took over, winning 10-2. It’s an episode that bronze still thinks about today.

“[Bronze] saw these great players, and they were all matched up against each other,” Dorrance said. “Steel sharpens steel.”

Bronze spent one year in Chapel Hill, winning a national championship before departing. But in early 2010 she returned to a country that didn’t so easily embrace her competitive spirit. Coaches were put off by her mindset, Dorrance said, encouraging her to calm down.

“The coaches were so afraid of her competitive fury. They wanted her to calm down a little, because they were so afraid all the girls in the roster will quit,” Dorrance said

12 years on, Bronze is a national hero.

Russo was similarly successful in North Carolina. She hit a goalscoring rhythm quickly for the Tar Heels, scoring nine as a freshman. But Dorrance remembers her more for her positive influence within the team. Russo suffered a gruesome leg injury in 2018, ruling her out for the season. After the game, she sent a text to her backup No. 9, Alex Kimball, encouraging her to embrace the role, and push toward her dreams of being drafted in the NWSL.

“What people just don't understand about Alessia despite all of our soccer glory, the thing that sets her apart is her humanity and her character,” Dorrance said.

Russo and Wubben-Moy eventually left UNC early, encouraged by Dorrance and his staff to pursue pro opportunities in the Women’s Super League. Russo penned a pro contract with Manchester United, while Wubben-Moy returned to her childhood club, Arsenal. 8 weeks later, Russo was named WSL player of the month. Wubben-Moy, meanwhile, settled into the XI for an Arsenal side that finished second in the league.

“Obviously we're incredibly proud of that because we take great pride in our ability to try to prepare these kids to play professionally,” Dorrance said.

Daly came to St. John’s at a difficult juncture of her career. She’d been among the England youth national teams as a youngster, but had fallen out of favor in recent years. Her confidence was occasionally lacking, St. John’s head coach Ian Stone said. He also had a positional problem. Daly was incredibly versatile and hadn’t quite found a proper spot on the pitch, one where she could unlock her potential.

Stone’s solution was to deploy her as an outright No. 9 — radically different from the full back spot she’d often played as a kid. The positional shift worked. Daly bagged 50 goals in 60 games for the Red Storm, becoming one of the most successful players in program history.

After college, Stone went around NWSL teams, lobbying for Daly’s inclusion. She was an obvious draft pick, clearly talented enough to play at the US’ highest level. Finding the right fit, though, wasn’t quite that simple. A conversation with Houston Dash coach Danny Waldrum settled things. Stone highlighted her competitiveness, her guile and her occasionally blunt nature around teammates. Coach Waldrum embraced it.

“All the all the great ones are like that,” he told Stone.

Daly found form quickly in the American pro game, establishing herself as a reliable goalscorer for Houston. For England, though, she slid into her old left back spot. And in the Euro, she excelled, helping a stout defense limit some of the best attacking squads in Europe.

“I was just so proud of her and also how far she's come in terms of her development as a very complete player,” Stone said.

South Florida coach Denise Schilte-Brown knew that Demi Stokes deserved an England appearance. The defender was starring for the Bulls, picking up back-to-back All-Conference selections. She made England training camps routinely and finished first in all of the fitness tests. She was a good teammate, vocal leader and diligent trainer. But from 2011-2013, Stokes remained in South Florida. For the South Shields native, it was a chance to bond, Schilte-Brown said. The two spent holidays together, as Stokes seldom traveled home.

“She was more than a player to me, she was like a family member,” Schilte-Brown said.

As the months passed, Stokes continued to improve on the pitch. She became a better one-on-one defender and more of a threat in attack, too. She was a source of advice for younger squad members, and a crucial part of a Bulls squad that made an NCAA Tournament appearance.

Then, finally, the call came. In 2014, Stokes split her time between South Florida and England, training with the first team while tallying a handful of international caps. That season, she still tallied 18 starts, including all 90 minutes of the Bulls’ NCAA Tournament contest against Illinois State.

“I'm really proud of [Stokes]. I'm really inspired by her. And I hope she continues to pave the way for young girls,” Schilte-Brown said.

All of the former US college players are still in contact with their coaches. Daly and Stone exchange messages every month or so. Schilte-Brown will always call Demi Stokes after milestones. But the strongest connection might be with Russo’s Dad, Mario.

He sends Dorrance and his staff every single news clip that features his daughter, or the England team. For the last four weeks, the UNC inbox was inundated with pictures of front pages and glowing media mentions. Whenever they came through, the school then re-released them as part of a mass email: one the players receive every week.

It’s those kinds of ties, those connections, that keep the players close to the coaches, programs and pitches that developed them.