Today is decision day when it comes to the field selection for the NCAA Women’s College Soccer Tournament, but first we make one final projection with our TopDrawerSoccer.com Tournament 64 National Ranking. 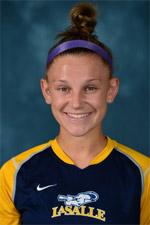 The ranking is an effort to project the postseason women's college soccer NCAA Tournament field of 64 each week, including the automatic qualifiers from every DI conference. The ranking update is posted each Monday after reviewing all results from the previous week. In the coming weeks, the ranking will transition to a reflection of actual tournament performance, round-by-round.

Stanford continues at #1. The current senior class just completed a remarkable 40-0-0 record in Pac-12 plat over their 4 regular season with the Cardinal. It would be difficult to pick anyone else as the NCAA Tournament top seed and favorite.

The complete women's college soccer ranking can be seen here.

Meanwhile sisters Jourdan McVicker of La Salle and Jillian McVicker of Ohio State are our TopDrawerSoccer.com Women’s College Co-Players of the Week after both received defensive MVP honors in their respective conference tournaments, helping the Explorers and the Buckeyes in championship wins. The honor, along with the 11-player Team of the Week, is awarded each week after a review of match reports through DI women’s college soccer.

D: Brooke Bendernagel, Hofstra – The senior defender was named to all CAA Tournament team for her work in helping the Pride capture the title.

D: Rachael McGlinchy, San Diego State – One of the stalwarts in the back as the Aztecs posted a pair of shutout wins in the Mountain West Conference Tournament.

D: Cloee Colohan, BYU – Went 194 minutes in the back line and scored a goal as the WCC champions recorded a pair of shutout victories