Five First Round Matches to Watch 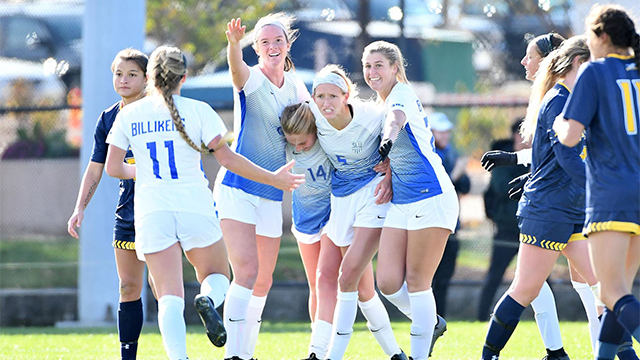 The women’s Division I NCAA tournament kicks off on Friday, November 14, with 32 matches around the country.

Don’t miss these five minutes as the stretch run towards San Jose begins.

One of a handful of in-state rivalries in the first round, it’s a short trip for the Bulls up to Gainesville and a game against the SEC side. It’s a chance for South Florida to avenge a non-conference loss all the way back on August 25 when the two sides take the field. Bottling up Evelyne Viens is going to be a main focus for the Gator back line. Senior Vanessa Kara, in her lone season at Florida, has been huge in contributing 10 goals on the year. Playing at home is going to make minimal difference, as there won't be much separating the two teams.

The Longhorns got in via an at-large bid after what was very much an up-and-down season. There is talent on this squad to go on the road and come away with the result against the Aggies. Big nights will be needed from Haley Berg, Emma Regan and Cyera Hintzen if the Big 12 side is to progress. An 8-1-2 record at home is a formidable mark, and if Ally Watt and Jimena Lopez are on song, it may be a long night for the visitors.

Both programs are coming off tremendous seasons, as the Hawks dominated the MAAC once again, and Brown put together an immaculate season in the Ivy League. Their reward? Not getting a seed in the tournament, despite finishing with an RPI of 10, the reward is a far from straightforward battle with the Hawks. They haven’t lost a game since August 30, a 1-0 defeat against NC State. That stretch includes a 4-0 win on the road at Texas, and there will be no fear from the MAAC champs when they hit the road to pay a visit to the Bears. Madie Gibson and Lexie Palladino have been the two big attacking pieces, but there’s no doubt that the team has plenty of players that can do damage. Freshman forward Brittany Raphino earned Freshman of the Year honors this week, and her eight goals and three assists have been, while Sydney Cummings anchors the team defensively. Any outcome here wouldn’t be surprise – a shootout, close win, this should be an entertaining match.

Given the way that regional decisions drive some of the committee’s decision, it’s no surprise to see Cal and Santa Clara line up against one another in the first round. Perhaps a tad unfortunate, as both had good seasons and it’s cruel that one of their seasons will end on Saturday. Cal hosted and won the regular season matchup by a 2-1 score, and there could be even more goals this time around. WCC can throw plenty of firepower at Cal goalkeeper Angelina Anderson, whether it’s Izzy D’Aquila, Kelsey Turnbow or Kelcie Hedge. But there’s also the battle-tested Bears to consider. Anderson has plenty of help in front of her, as defender Emily Smith picked up First Team All-Pac-12 honors. Emma Westin scores the goals, while Luca Deza creates in the midfield.

The Irish host the Billikens for the second time this season, a game that opened the season for the pair on August 22. It was a 1-0 win for the ACC team that time, part of a six-game winning streak to open 2019. Since then, the Irish have a mark of 4-7-2, including a 3-0 loss in the ACC tournament quarterfinal. Coming from the more prestigious conference, surely the Irish are going to fancy their chances of coming away with another win against the Atlantic 10 force. A higher-scoring clash favors SLU, which leans on players like Hannah Friedrich and Courtney Reimer to push the attack along. Defensively, Alli Klug and Mary Niehaus provide experience and quality. They’ll need to focus on slowing Sammi Fisher and Eva Hurm. It’s far from a straightforward test for Notre Dame, which is sure to be pushed to the limit in this one.