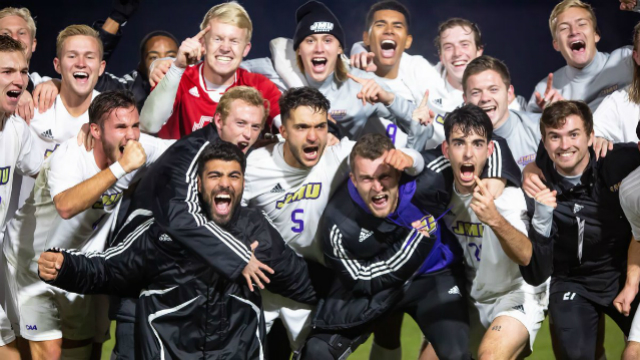 Five seeded sides tumbled in Sunday's play, as the men's Division I tournament field was whittled to 16.

Akron, Lipscomb, James Madison, Air Force and Michigan State survived to advance to next weekend's action, with each picking up wins away from home.

The Zips traveled to upstate New York, battling both Syracuse and snowy conditions for the second game in a row. Abdi Mohamed put Akron up in front in the 37th minute, though the Orange's Massimo Ferrin leveled the game before half time. It was Mohamed again that helped the Zips get back ahead, when Hendrik Hilpert saved the right back's shot into the path of Marcel Zajac, who put Akron ahead for good in the 74th minute. Just under seven minutes later, Morgan Hackworth made it 3-1, setting up a huge match next Sunday against Wake Forest.

James Madison arguably secured the result of the round, as the CAA champions ended North Carolina's hopes of a return to the College Cup. Aaron Ward-Baptiste seized on a failed clearance by the usually reliable Tar Heel back line, beating James Pyle to put the Dukes ahead for good in the second half of a 2-1 victory.

After making the trip from Seattle to Orlando, Lipscomb made the trip count, beating UCF 1-0 in overtime. Freshman Louis Robinson slotted home the 97th minute winner after Lipscomb weather the storm. Goalkeeper Chris Zappia made eight saves, as the Bisons were outshot 19-8 on the night.

It was always going to be a big test for Portland, which faced the prospect of a short recovery window after Thursday's tough, 1-0 win against UCLA. And they were unable to lock down Kentucky's dynamic attacking duo of JJ Williams and Kalil Elmedkhar, who paced the Conference USA double-winners to a 4-0 victory.

After 40 minutes of scoreless soccer, El,edkhar burst to life when a Jason Reyes through ball played him in behind to make it a 1-0 game. Just over a minute into the second half, Williams scored the first of his two goals, finishing to the far post after a giveaway in the Portland back line. ElMedkhar and Williams both scored again, setting up a third round matchup against Lipscomb next weekend.

Another College Cup contender showed up in a big way in the second round. Indiana put four past a visiting Connecitcut(m) side. Andrew Gutman headed home the opening goal in the 17th minute from a corner kick and three minutes later Griffin Dorsey made it two. Another flurry of goals from Spencer Glass and Timmy Mehl rounded out the scoring as the No. 2 seed progressed.

Former ACC foes Maryland and Duke are set to battle it out next weekend after both secured shutout wins at home. The Terps burst to life when Amar Sejdic punished a mistake from Leon Krapf, putting Maryland up 1-0 early against a tough NC State side. Sebastian Elney found the back of the net in the second half, securing the 2-0 victory and ensuring a trip to Durham awaits.

The Blue Devils did just enough against an underrated Pacific side. It was freshman Issa Rayyan, whose excellent season continued, that scored the decisive goal in the second half in a 1-0 win.