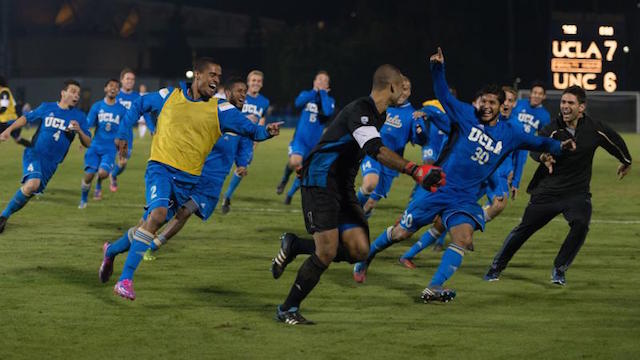 The idea of a national title favorite in men’s college soccer is a particularly relative term.

While the women’s game is largely driven by the dynasties established by an elite few, the men’s game is a mishmash of quality from every walk of life. Last year’s College Cup, for instance, consisted of a No. 2 seed, a No. 11 seed, a No. 16 seed (the lowest seed possible) and an unseeded team. Virginia, the No. 16 seed, won the title. The men’s NCAA postseason may not be a total crapshoot, but it’s as close as it gets in sports at this level.

So handicapping College Cup favorites in August is accompanied by one massive caveat: this could all turn on its head by November. The college game is that unpredictable. That said, we do have some insight on the nation’s best, and these five teams have as good as shot as anyone to hoist the ultimate trophy in Kansas City in December.

It seems hard to believe, but the Bruins haven’t won a national title since 2002. In the 12 seasons since, they’ve been NCAA quarterfinalists three times and, as of last year, runners-up twice. You’d think that by losing a Hermann Trophy winner UCLA would take a sizable step back in 2015, especially after bossing the national title game and losing on penalties to a bunkering Virginia team. But it’s a testament to the foundation Jorge Salcedo’s built in Westwood over the past decade that the Bruins should be back into contention this season. Without question.