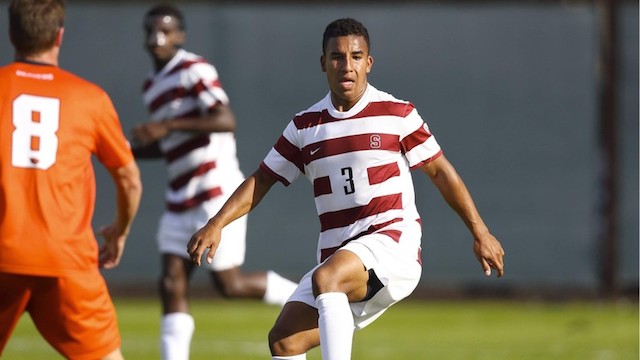 Sources suggest MLS’ 2015 Generation adidas haul will likely be small this season. Earlier this week, Ives Galarcep reported Central Florida defender Romario Williams would be a GA player, which only leaves a few slots left open. This is a stab at a few back-market GA-ready players who may not be getting the kind of attention that lends itself to a greased college-to-MLS jump.

GK Alex Bono, Syracuse: It hasn’t always been this way, but it’s become increasingly rare for a keeper to earn a Generation adidas tag. In fact, Connecticut’s Andre Blake is the only keeper selected in the last three years. If ever there deserved to be one, it’s Bono in 2015. The Syracuse netminder is the total package. Whether that’s an athletic goal line clearance or sharply organizing his back line, Bono already possesses the full toolkit with a year left in college. Keepers are in ready supply, and Bono could struggle here because the senior class isn’t bereft of talent. But the simple fact is that Bono is college soccer’s best keeper, junior or no.

M/F Timo Pitter, Creighton: MLS clubs judge prospects on a variety of metrics, but one that cuts across the grain is versatility and adaptability. On the pro level, players are often asked to slot into positions with which they may less familiar. Nature of the beast. Finding a player with more adaptable promise than Pitter will be difficult. The German junior led a very good Creighton team in assists in 2014 with nine, and he contributed six goals as well. He can play between the lines or as an out-and-out midfielder or second striker, which should garner interest when paired with his decision-making ability.

D Brandon Vincent, Stanford: Speaking of versatility. At 5-foot-11, Vincent’s future along the back line isn’t perhaps as clear cut as some of his center back brethren. Vincent doesn’t have the aerial presence that MLS often commands of its central defenders, but that shouldn’t deter the league from taking a look. Think more A.J. DeLaGarza than anything here; Vincent has plush feet and outstanding spacial awareness. And if that doesn’t translate to a center back spot in the next level? Vincent spent much of his 2014 at left back, where he thrived both tracking and getting forward. That should drastically help his stock.

M Ludwig Ahl, UC Santa Barbara: Remember Garrincha? The world class Brazilian who perfected the art of the dribble? Ahl is his natural modern extension. OK, so maybe that’s getting a bit carried away. But still, Ahl is a joy to watch drive into the area from deeper positions, which he did frequently in his first season with UCSB. The Swedish freshman midfielder is a textbook dribbler, with feet like plush cushions and vision for days. But he’s slight. At 5-foot-6, 150 pounds, he’ll need a system at the next level that can protect him and let him go. That said, his college bio lists playing in Europe as one of his goals. Can MLS lure away arguably the most promising underclassman in college soccer? We’ll see.

F Larry Ndjock, UCLA: Another German midfielder/forward? You got it. Ndjock transferred to UCLA before the 2014 season, and it was apparent that time spent in the system was beneficial by the time the Bruins got to the College Cup. Ndjock is a tricky player with lightning feet and a propensity to try things. Whether that’s a step-over in traffic or a deft chip from a seemingly insurmountable distance (see Clint Dempsey against Juventus for Fulham), Ndjock isn’t afraid to try it. Of course that isn’t always the best course of action, and Ndjock could stand to simplify his game, but his bag of tricks and ability to produce the sublime should entice the next level.