WASHINGTON – With a tough 1-0 loss to an experienced Georgetown team this past Monday, Florida Gulf Coast(m) closed the door on a difficult opening trip to begin the 2012 season.

The program, in just its sixth year of existence, lost to the Hoyas after opening up with a 4-0 loss against the Akron Zips in Ohio last Friday.

But for head coach Bob Butehorn, the experience is all part of the continued process of building a program into a national power – and that these two results weren’t a complete surprise. 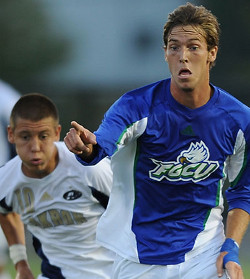 “I think we’re probably right where I expected us to be when we play two tough opponents at their places in both their home openers,” he told TopDrawerSoccer.com after the game. “That’s tough for a team, especially a young team. We’re growing up – we showed a lot of determination, but we’ve got a long ways to go. This group is talented but we’ve just got to put it together right.”

Added forward Will Morse: “They’ve been two tough games, we have to learn our lessons and bounce back at home.”

Butehorn has been at the helm of Florida Gulf Coast(m) since 2007, the program’s first year, and has built the program from the ground up in his first head coaching role in Division 1 men’s soccer since he was in charge at St. Bonaventure(m) from 1995-99.

The team joined the Atlantic Sun conference in 2008, but wasn’t eligible for postseason play in the NCAA until last year, when they captured the conference tournament title and earn its first-ever berth in the NCAA Tournament.

That long process helps Butehorn keep things in perspective on a road trip where the Eagles didn’t score a goal and conceded five. Instead of worrying too much about immediate results, he can think long term, even about this season.

“I want to get where this program is nationally recognized for what we do,” he said. “I think it’s going to happen, but I also think we have some ways to go. The end of the season is what’s going to matter, so I think they’re going to come along and we’ll be fine.”

Adding to the value of the experience, Butehorn started five freshmen in each of the two games, and youth is sure to be a common theme throughout the entirety of the 2012 season.

Because of the program’s growing stature, the recruiting classes have been getting better and better, making those young players ever better. This year, Butehorn added Aaron Guillen (FC Dallas Academy) and Daniel Stanese (Vancouver Whitecaps Academy) amongst a promising class, the pair having squared off in the 2012 Development Academy U18 championship.

To him, that’s one of many keys for the program’s success.

“I think the first thing you do is you try and build a level of consistency and you try and make sure the type of player you get in here has the character and the intelligence you want, and the technical ability,” Butehorn said

“Your focus stays on the task at hand, but over the long haul and building something that’s going to be sustainable and consistent. I think right now that’s what we’re doing, and I think that’s why our expectations always stay high.”

The progress hasn’t escaped the notice of the current crop of more experienced players. Morse, a senior forward who started against the Hoyas, has seen a program evolve up close over the course of his three-plus years there.

“It’s been a radical change from where we started,” he said. “It’d be impossible to recognize from where it started to where it is now.”

Despite the lofty overall goals, Butehorn maintains that his side is capable of picking up a second straight NCAA Tournament berth here in 2012 – and that’s the state goal. He’s confident in the talent of the team, and while he understands it’s a long process, there are many reasons for optimism, for both this year and down the road.

“I think those goals are attainable,” he said. “Whether we get this thing on the right path now, this season, is yet to be seen. But it’s there.”