A 1-0 win over arch-rivals Florida and a 4-0 victory on Sunday vs. College of Charleston were more than enough to keep the Florida State Seminoles in the #1 spot of our TopDrawerSoccer.com Tournament 64 National Ranking, updated today. 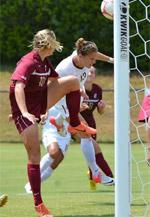 There is a lot of movement throughout the list, with Duke rising to #2 and a number of other teams creeping up or down the list. New entries to this week’s ranking include strong starters Mississippi, BYU, Clemson and Washington, plus North Texas, Jacksonville State and Youngstown State in the Sun Belt, Ohio Valley and Summit automatic spots, respectively.

Meanwhile, Kristin Gubka of Florida State is our TopDrawerSoccer.com Women’s College Player of the Week after she helped lead the Seminoles to two shutout wins, playing every minute in defense and scoring in each game. The honor, along with the 11-player Team of the Week, is awarded each week after a review of match reports through DI Women’s Soccer.

GK: Emily Lillard, Miami (FL) – Posted a pair of shutouts for the Hurricanes, making four saves in both a win and a draw.

D: Kristin  Grubka, Florida State – Played 180 standout minutes in the back line during a pair of shutout wins for the Seminoles, scoring in each match, including the gamewinner in a 1-0 win over Florida.

D: Whitney Church, Penn State One of the top defenders in the country played 200 minutes overall as Penn State won twice, including once in overtime, surrendering just one goal..

M: Erin Yenney, Louisville Recorded 2 goals and an assist as the Cardinals took a pair of shutout victories.

M: Karlee Summey, Baylor – Scored twice to help the Bears to a pair of wins.

F: Carlee Payne Holmoe, BYU – Scored the winning goal vs. Long Beach State and provided a quality assist on the opener in the Cougars’ victory over Colorado College.

F: Jaclyn Dutton, Kent State – Scored 5 goals to help the Flashes to a pair of wins.