Gabby Carle: Her best is yet to come 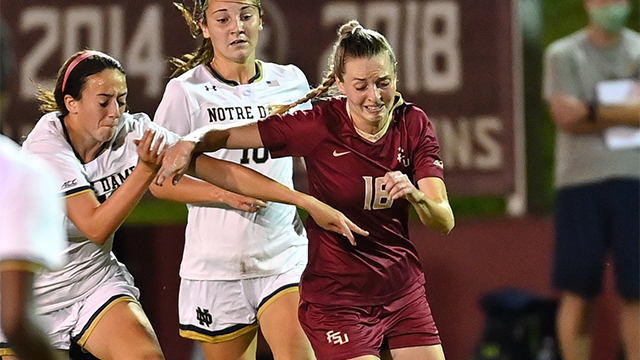 Raise your hand if you’ve played as a member of an NCAA Championship team.

Raise your hand if you’ve been a member of a national team that has played in the FIFA World Cup.

Raise your hand if you’ve achieved a perfect 4.0 academic grade point average throughout the entirety of your collegiate career.

Gabby Carle, a senior member of the nationally ranked Florida State Women’s Soccer team, is a member of that select club – and may be one of the few people in the world whose accomplishments allow her to raise her hand for all three statements.

In Carle’s four seasons as a Seminole, she has started 61 consecutive games and rarely does she come out of a match.  She has helped lead Florida State to 52 wins (an average of 17 wins per season), victories in nearly 75 percent of its matches, the 2017 and 2018 ACC Championships and the 2018 NCAA Championship.  An Academic All-American in 2019, she has earned All-Region honors for her play on the field and her success in the classroom, was named to the College Cup All-Tournament team in 2018 in leading the Seminoles to the National Championship and was the winner of the NCAA Elite 90 Award at the College Cup in 2018.

As one of just one of 17 current student-athletes at Florida State with a cumulative 4.0 Grade Point average and one of only two with a cumulative GPA of 4.0 and a national championship ring (teammate Kristina Lynch is the other) the senior from Quebec, Canada, makes her impressive list of accomplishments sound incredibly simple.

“I think it’s a mix of organization and motivation,” said Carle.  “Academics has always been an important part of my life, so I’ve always tried to put as much work into my school as I do into my soccer. Making sure my schedule is well-balanced, for example by giving myself time to relax, has also helped me stay on top of my academics and my sport.”

Staying on top of her sport is something that has always come naturally for the multi-talented Carle who excels at both the midfield and defender positions for the Seminoles.

Carle’s talents on the pitch at a young age made her a rising star in the Canadian Soccer Association.  She made her first appearance for her home country at age 15 in the 2014 FIFA U-17 World Cup.  Just a year later she played her first game for the Canadian Senior National Team at the 2015 Pan Am Games which were held in Toronto.

“My greatest soccer moment was playing in the Pan-American Games in Toronto in 2015,” said Carle.  “It’s what got me seen by the senior National Team head coach and how I started my senior career.”

The exposure Carle gained in the Pan Am games in 2015 earned her one of the highest honors a soccer player can receive – an invitation to play as a member of the Canadian National Team in the 2019 FIFA Women’s World Cup.

For Carle, who began playing soccer at the age of five, becoming a member of the Senior National Team is an accomplishment she lists as one of her greatest personal accomplishments.

“My first thought (when I was named to the team) was that my childhood dream was coming true,” said Carle.  “It felt great to be selected on that squad. It was also a great feeling to see years of hard work and resilience pay off.”

With Carle on the team, Canada advanced to the knockout stage of the tournament with wins over Cameroon and New Zealand and advanced to the round of 16 before falling to Sweden by a 1-0 score.  The powerful Swedish side defeated England, 2-1, Canada finished in third place in the tournament.

“It’s an experience I’ll never forget,” said Carle.  “There was definitely some pressure to perform as a team, but we also had a lot of fun on and off the field. Getting to travel all over France was also an added bonus.”

Carle’s experience on the world’s biggest stages pushes her teammates to achieve success at the highest levels.

“As a player with ODP (Olympic Development Program) experience, I draw a lot on inspiration from Gabby’s international experience with the Canadian National Team,” said Seminole defender/midfielder Kirsten Pavlisko.  “Gabby shows all of the hard work, determination, and dedication that’s necessary to reach the next level. She always gives 100 percent, and she proves that it (hard work) pays off.

Prior to the start of the Seminoles’ NCAA Championship run at the College Cup in 2018, Carle was presented with the NCAA Division I Women’s Soccer Elite 90 award.  An award founded by the NCAA, it recognizes the true essence of the student-athlete by honoring the individual who has reached the pinnacle of competition at the national championship level in his or her sport, while also achieving the highest academic standard among his or her peers. The Elite 90 is presented to the student-athlete with the highest cumulative grade-point average participating at the finals site for each of the NCAA’s championships.

Leading Florida State to the 2018 NCAA Championship, the second in the history of the program, is a memory that Carle will long remember.

“Winning the 2018 NCAA Championship is one of my favorite soccer memories,” said Carle.  “That run to the National Championship was extremely challenging. We played great teams and had to battle our way through, but I remember not once doubting that we would make it to the top.”

Carle recalls her fondest moment as a Seminole coming during their 2018 run to the national championship – as she scored Florida State’s first goal in a 2-0 win over No. 1 ranked and undefeated Stanford in the semifinals of the NCAA Tournament.

“My favorite Florida State soccer moment, individually, was scoring against Stanford in the NCAA Championship semifinal in 2018,” said Carle.  “As a team, my favorite moment was undoubtedly winning the National Championship.”

Mark Krikorian, Florida State’s Head Coach, has a great deal of respect for Carle and her accomplishments both on the field and in the classroom.

“Gabby is as outstanding of a student-athlete that we have here at Florida State,” said Krikorian. “All of the qualities that we as coaches and parents want in these young students, Gabby has. She is responsible, she is diligent and meticulous to detail. That is in the classroom and on the soccer field. From my perspective, I think Gabby is just a great role model to all of the other kids on the team.”

Carle, who will earn her bachelor’s degree in Exercise Physiology in May of 2021, is an outstanding role model and prides herself on her role as a leader – a role that she accepted early on in her Seminole career.

“We have a lot of experienced players on our team this year, and as a senior, I’m glad I get to share my experience to help better the team,” said Carle.

“For me, being a leader means using my experience to help my teammates as best I can. It also means offering guidance when someone needs it and being as supportive as I can be.”

Redshirt senior Clara Robbins, a midfield starter for the Seminoles, is one of five seniors on Florida State’s roster this season.  She, too, was a member of Florida State’s 2018 NCAA Championship team and has grown alongside Carle as Seminoles.

“Gabby is exceptional both on and off the field,” said Robbins.  “Her dedication to soccer, as well as classes, is unmatched. She leads by example as she makes others around her strive for greatness. Throughout her career here, she’s always done the right things to make herself and the team better, and it’s truly inspiring. Gabby’s definitely someone I look up to as she exemplifies hard work, intelligence, dedication, and kindness.”

While Carle is far from done with many accomplishments to come as a member of the Florida State soccer team, she realizes graduation is quickly approaching.

“I really can’t believe that I’m a senior at Florida State,” said Carle.  “These past three years have gone by so fast. When I first got to FSU, I was told that it would go by fast, and now that I’m a senior I can confirm it’s the case.

“The fact that I’m set to graduate in less than a year hasn’t sunk in yet. I am however excited about it; finishing my undergraduate program is something I’m looking forward to.”

Carle has put herself in a position to finish her career as one of the most accomplished Seminoles in school history, and her best is yet to come.