So how does an entire back line end up on the TopDrawerSoccer.com Team of the Week?

By picking up back-to-back shutouts against nationally-ranked ACC opposition and winning both of those games 1-0.

That’s what #1 Florida State was able to do against Duke and Wake Forest, beating both teams at home over the past weekend by that same score line.

Jamia Fields scored the game winning goal against Duke, and Tiana Brockway’s second half tally stood up against Wake on Sunday as Florida State extended its winning streak to eight. 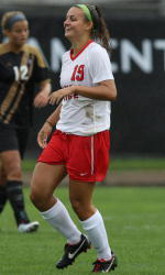 "This was a great weekend for us," head coach Mark Krikorian said in a press release. "The competition can't get much better than this; to be able to play a Thursday night match against Duke and get a 1-0 result and then to come back and duplicate that effort against Wake Forest is a great weekend."

While there was a majority of close games in the Eastern corner of the country, a few prominent programs blew out their respective opposition.

Georgetown, fresh off a west coast trip that saw them lose 6-0 against defending champion Stanford, took their anger out on Seton Hall in an 8-0 win. Sophomore midfielder Daphne Corboz bombarded the Pirates, scoring three goals for her first ever hat trick at the collegiate level.

"I'm very proud of the girls," Hoyas head coach Dave Nolan said in a release. "It was a disappointing result against Stanford, but overall, the performance was fantastic from start to finish."

Eight was the recurring them in some of these blowouts, as Boston College romped past Boston rivals Harvard by an 8-1 score. Senior Kristen Mewis bagged a hat trick, the first of her career, and freshman McKenzie Meehan added two of her own.

For Notre Dame, seven different goal scorers found the back of the net in a 7-0 defeat of Cincinnati, as the Irish opened up its Big East schedule with two wins. Among the goal scorers were U.S. U20 returnees Mandy Laddish and Cari Roccaro.

"We needed one like this and it felt a lot like we normally have it around here," Notre Dame head coach Randy Waldrum said in a release. "For the first time since pieces of last year, it felt like the dominance we're used to seeing. I'm really proud of the kids because with all the (substitutions) we made, we didn't lose anything. All the players played well and we got to play everybody who was healthy.

Hokies pile up the shutouts

Another ACC power posting a clean sheet was #9 Virginia Tech, winning its conference opener by rolling past NC State 3-0 on Sunday. Tech has now gone six straight games without conceding a goal.

Forward Shannon Mayrose put in a two-goal performance to lead the way, while substitute Nicolette Young added the team’s third goal on the day, as Tech won its ninth straight game in a row.

Redbirds back on winning track

Heading into the weekend coming off back-to-back losses, Illinois State needed to bounce back on the road.

And that’s just what they managed to do, winning 2-1 on the road against Bowling Green, before following that up with a 1-0 defeat of Toledo.

Sarah Mussallem scored the decisive goal for the Redbirds in the 1-0 win, while Rachel Tejada – second in the nation with 10 goals to her name – was kept silent for the afternoon.

"For the second game in a row, we raised the intensity level in the second half," Illinois State head coach Drew Roff said in a release. "In the second half, we were winning challenges in the midfield and doing a better job of getting the ball to our forwards. They were able to create some good scoring chances for us."

Perhaps one of the nation’s most underrated conferences is the Ivy League, and the frenetic season is scheduled to start this weekend with a number of tasty matchups.

Entering the slate with the most momentum is Yale and Brown. The Bulldogs currently own a three-game winning streak after beating Central Connecticut 1-0 at home on Sunday. Kristen Forster netted the only goal of the season.