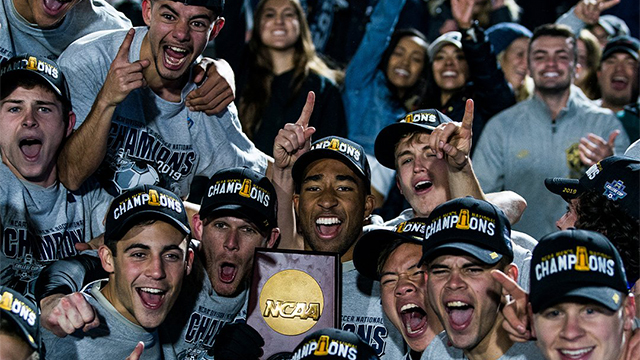 The air was nippy but the competition was hotly contested. It took 110 epic minutes of back-and-forth regulation and overtime before the teams matched kicks from the spot through six frames of a penalty shootout. A save by freshman Georgetown goalkeeper Tomas Romero was the ultimate decider, as the Hoyas defeated top-ranked Virginia 3-3 (7-6) to win their first national championship.

“Congratulations to Georgetown—great fighting spirit and great game,” Gelnovatch said. “I’m also very proud of our fighting spirit. I think you saw two teams out there really going for it.”

As they did Friday, Virginia cracked the scoreboard first, tonight in the 10th minute. Off a header clearance in the area, junior midfielder Joe Bell first-timed a shot from just outside the arc. The Kiwi All-American’s low liner deflected off the foot of Georgetown defender Daniel Wu in front of goal and squibbed past Romero for the early 1-0 advantage.

“I think it deflected off Sean Zawadzki, then I stuck a leg out to try to block it and it deflected off my left foot,” Wu explained. “Tomas was already diving to his right and he just couldn't make it back on time.”

The Hoyas struck back just six minutes later. A chip pass by Zach Riviere found midfielder Paul Rothrock stationed in the goalmouth, sandwiched by Wahoos goalkeeper Colin Shutler and defender Bret Halsey. As Shutler and Halsey played a game of you-first, Rothrock obligingly settled the sphere and poked it into goal for the equalizer.

Georgetown grabbed their own lead in the 22nd minute. A free kick off the right wing by Riviere found the noggin of defender Rio Hope-Gund, who backheaded the service to a waiting Wu. The Apex, N.C. native and North Carolina FC Youth product guided his shot past a frozen Shutler for his first college goal and a 2-1 lead that held until halftime.

“The ball was played in and I saw [Hope-Gund] going up for it,” Wu said. “I made the run toward him because I just had a feeling it was going to land there. It landed there and I was like, ‘Oh shoot, I guess I'll have to shoot this,’ and it just went in.”

After some extended probing, Virginia found an equalizer in the 58th minute. Irakoze Donasiyaho fed Daniel Steedman, who got the turn around Hope-Gund and slipped a shot across the face of Romero that snuck just inside the far post to knot the score at 2-2.

The drivable proximity of both schools to Cary lent to a rambunctious crowd that only grew louder as the match entered its final throes. Georgetown regained the lead again when Hoyas midfielder Achara drove inside off the left wing, then slipped a diagonal through ball ahead to forward Derek Dodson. In on goal, Dodson feigned right, then struck his shot left for his 11th goal this season and a 3-2 lead.

The Cavs weren’t done, however. After a Virginia free kick that found its way beyond the far post in the 86th minute, forward Axel Gunnarsson chipped a pass into the keeper box where Daryl Dike got a head on the ball. Romero made a save, but Dike was there to roof the rebound and tie the score yet again at 3-3. Virginia couldn’t cash in a last second loose ball in the area, sending the match into sudden-death overtime.

In the 97th minute, Donvasiyano got off a rocket shot, but Romero was in position to make a diving save. Georgetown left their own last chance wanting at the end of the second overtime period, setting the stage for kicks from the spot to decide the championship.

The teams exchanged conversions through six frames of the shootout before Romero dove right to save Gunnarsson’s attempt, sending the Georgetown partisans into hysterics over their first men’s soccer title.

Romero said during Georgetown’s previous shootout against Butler on Nov. 13, he relied largely on the team’s scout for preparation. Tonight, he relied more on his instincts

“I should have saved one of the other [PKs],” Romero said. “[Gunnarsson] stepped up and he kind of did a straight walk back and then went to the side, and usually when someone does that they go to my left. For some reason I just thought, ‘I think he's gonna go right,’ and I just dove right and saved it.”

Sunday was the third straight men's College Cup final in Cary that was decided by a shootout Coincidentally, Virginia won the two previous shootouts against Akron (2009) and UCLA (2014).

“Not too many [shootouts] go to six or seven rounds,” Gelnovatch said. “Both teams took some pretty good pens. Each keeper had a half chance at one of those pens. The times that I've won in pens here, it's never gone past five [frames]. I think you saw two teams prepared did a pretty good job.”

Sunday’s final was the highest scoring title match since 1980. Virginia had not allowed more than two goals in a game all season and only 10 goals total the entire campaign.

“I bet it would have been enjoyable to watch as a neutral,” Bell said. “With such a short turnaround between the two games, that sets the game up for a lot of transition, especially in the overtime. So seeing it go to penalties wasn't that surprising. It’s obviously a tough way to lose, but you can't be prouder of the effort. Georgetown got the win today, and you sign up for this when you start playing soccer.”

Despite the victory, Wiese said his team never fully found had a grip on the game because Virginia made matters difficult.

“It felt like a game unlike any we've played all year because of Virginia,” Wiese said. “Virginia makes it incredibly hard to press. We like to press and dictate, but for long stretches of the game we were defending, trying to figure out how to to prevent Dike from getting time and space. As a back four they space really well. So they’re a tactical conundrum for us. We fancy ourselves as a good matchup against them when we have the ball, but without the ball they were very difficult to solve because of the pieces they have.”