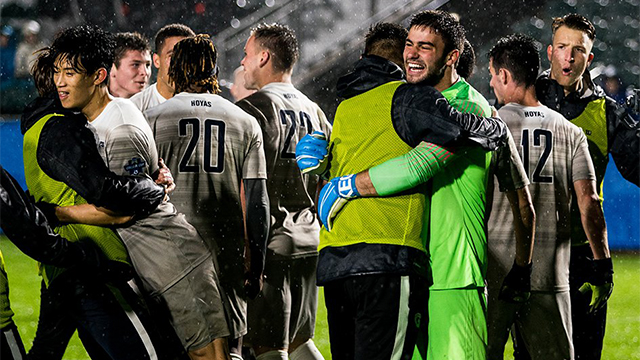 CARY, N.C. — A cold rain fell Friday evening on Cary, North Carolina for the semifinals of the NCAA Men’s College Cup. The marquee match was an all-ACC tilt between the top-ranked Virginia Cavaliers and the Wake Forest Demon Deacons. The teams met just once this season, a Virginia victory in the ACC tournament semifinals last month.

Virginia picked up where they left off for Friday's rematch. A first-half brace by Daryl Dike paced the Cavaliers, who held off a game Wake Forest squad for a 2-1 win and Virginia's first return to the College Cup final since winning the 2014 championship.

“We're thrilled to be competing on Sunday for a national championship,” said Virginia head coach George Gelnovatch. “I give a lot of credit and have a lot of respect for our opponent tonight, and I thought it was a pretty good game given the conditions.”

“I thought we started really well, and just a little mistake and letting a big ball over us,” said Wake Forest head coach Bobby Muuss. “We always talk about don't let one ball beat you, and that happened. Obviously, one of the best forwards in America gets that chance and, man, he took it.”

Virginia christened the scoreline in the 20th minute when defenderAndreas Ueland airmailed a long ball over the top of the Wake Forest defense that found forward Daryl Dike in stride. After three bounces, the third-team all-American first-timed an angled shot past Demon Deacons goalkeeper Andrew Pannenberg for a 1-0 lead.

“Andreas played an incredible ball to put me through,” Dike said. “I picked my head up and just let it go and next thing I knew it was in the back of the net. A little bit of luck, a little bit of skill, but I’ll take it. A goal’s a goal.”

The Cavaliers struck again just three minutes later, when Dike redirected a Daniel Steedman corner kick into nylon to push the advantage to 2-0 heading into halftime. With Virginia, the top-ranked defense in the nation, having not allowed more than two goals in a game all season, the Cavaliers fortunes seemed secure.

As the deluge turned biblical, the Wahoos held the Deacs at bay for most of the second half. Their lone misstep came in the 79th minute, when Ueland tripped Wake’s Machop Chol in the area, drawing a penalty. All-American Bruno Lapa stepped to the spot and converted his penalty kick, closing the gap to 2-1. Virginia held off several last-ditch attacks, as all-American goalkeeper Colin Shulter finished the match with seven saves, including six in the second stanza. As the final whistle blew, the Cavaliers began to turn their attention to Sunday, while the Demon Deacons were left to decide whether to make their sojourn back to Winston-Salem by bus or ark.

“In a perfect world it wouldn't have rained and it would have been 60 degrees and the place would have been packed,” Muuss said. “But both teams had to play in the elements, and unfortunately we were on the receiving end of that.”

Virginia put just two shots on frame for the match, but they both found net thanks to Dike’s brace.

“We always say in soccer 2-nil is the hardest lead to keep, and this game proves it,” Shulter said. “They were pushing us back, and we bent but we never broke. All credit to all the guys on the field—they worked their asses off.”

Earlier in the evening, the second-ranked Georgetown Hoyas jumped out to an early lead over a waterlogged Stanford Cardinal, then added another goal in the second half for a 2-0 victory and their own ticket to Sunday’s championship final.

“Tonight it just wasn't there,” said Stanford head coach Jeremy Gunn. “We'd love to be playing the game again several times over because we were just second best in so many areas.”

Despite miserable weather conditions, the pitch at WakeMed Soccer Park held up well, the consequence of effective underground drainage and periodic squeegeeing on the south end of the field, where the water historically doesn’t seep away as well.

Despite opening the match at the soggy end of Sahlen’s Stadium, Georgetown jumped out in just the fourth minute. Off a headed clearance by Stanford’s Keegan Tingey, Zawadzki caught a volley from 22 yards out and flew it past Cardinal goalkeeper Andrew Thomas for Zawadzki’s third goal this season and the 1-0 advantage.

“I was telling the guys it's probably the cleanest I've ever hit a ball,” Zawadzki said. “It just felt good right off my foot. Opportunities like that don’t come a lot, so I had to make the most of it.”

“It’s a goal that he’s going to be playing for his kids and his grandkids,” Gunn said. “It’s a world-class strike and a world-class goal.”

In the 65th minute, Stanford’s Keegan Hughes slid in front of Georgetown captain Derek Dodson, taking him down just outside the area. Despite the absence of any other Cardinals between Dodson and goal, referee Mike Stutt did not send Hughes off for denial of a goal-scoring opportunity, instead just showing the Stanford defender a yellow card.

Conceding an early goal left Stanford swimming upstream, figuratively and almost literally. With the Cardinal chasing an equalizer, the Hoyas—the only College Cup team to finish in the top 10 nationally in both scoring and defense this season—found their second goal in the 67th minute. Zawadzki sailed in a cross off the right wing that deflected off two Cardinals, the last being the shoulder of Stanford’s Logan Panchot. Georgetown’s Foster McCune, who didn’t play in the first half, stuck his head into the fray, nodding the loose ball over the goal line to account for the final 2-0 scoreline.

“In a game like that, it doesn’t have to be the prettiest goal in the world,” McCune said. “So I’ll take it, the guys will take it, and anything to get us to Sunday is worthwhile.”

Georgetown controlled the pace of play throughout the game, imposing their will on an apparently overmatched Stanford, who were appearing in their fourth College Cup in five years after winning three consecutive championships from 2015 to 2017.

“I think we didn't adapt quite as well as Georgetown did,” Gunn said. “They scored an unbelievable strike that's worthy of winning any game, and I think when you go into a cagey semifinal in difficult conditions, that moment absolutely gives them all of the belief in the world and really took the wind out of our sails.”

Georgetown advances to just their second College Cup final, the last being a 2012 loss to Indiana. Despite being just over 100 miles apart, the last time Virgnia and Georgetown met was the 2014 NCAA tournament quarterfinals, which the Cavaliers won before going on to win the College Cup. Coincidentally, that’s also the last year the men’s College Cup was held in Cary, NC.