Penn State has certainly made plenty of noise in the last few months, and the program continues to stock up on the best players produced by in state clubs. 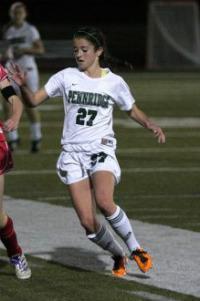 Add another IMG Academy 150 player to Erica Walsh’s storied program, as Marissa Sheva recently committed to be a Nittany Lion.

“Everything about Penn State felt right,” she told TopDrawerSoccer.com. “I love the coaching staff and the tight knit group of families apart of the women's soccer team. I could tell from my first visit that the team was very close and they all loved being at Penn State.”

The attacking midfielder was also drawn by the presence of Walsh, who has built quite the program in State College.

“Having the opportunity to be coached by Erica Walsh was one of the main reasons I committed to Penn State,” she said. “She has had great success with the program and I am more than excited to become a part of it. Aside from the great coaching staff, the facilities and other training tools at PSU are incredible.”

It's only about a 3-hour drive from home, which I really liked! Although the campus is pretty big, it has a really homey feel to it, which was comforting during the stressful process of picking a college I would be living at.

Getting the chance to play ten minutes from home was too good of an opportunity for Nicole Westover to pass on.

That, and the team’s proficiency in the classroom really stood out to the Nevada native.

“I liked their soccer program because they have an impressive GPA level,” she told TopDrawerSoccer.com. “I also like how well they play together. When I visited with the team I loved how welcoming everyone was and how close of a bond they all share.”

The school also provides the right kind of academic setting for her ideal job after school.

“I love the fact that they have a law school with a criminal justice program because I either want to be a cop or a lawyer,” Westover said. “I also like how the school is green with many trees. It does not even feel like you’re on the strip.”

Forward Lily Sender, from Honolulu Bulls, committed to UNLV for the fall of 2013.

Hope Gouterman, a midfielder from Bethesda SC, committed to Maryland for the class of 2013.

Midfielder Courtney Anderson, from Heat FC (Nevada), committed to UNLV for the fall of 2013.

Forward Chole Fifer, from FC Dallas, committed to Abilene Christian for the fall of 2014.

Forward/midfielder Dakota Blazak, from Heat FC, committed to UNLV for the fall of 2013.

Midfielder Jordan Magnin, from SoCal Blues, committed to UNLV for the fall of 2013.

Crossfire midfielder Darby Mason committed to Penn for the fall of 2014.

Bethesda SC’s Tyler Lussi committed to Princeton for the class of 2013.