A Top 150 ranked recruit from the Pacific Northwest, Kelsey Turnbow took notice of a prestigious program in Northern California, where she’ll play in 2017. 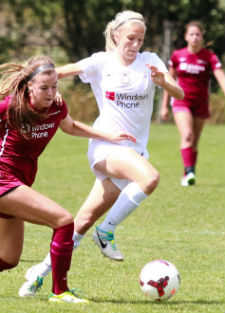 “I committed to Santa Clara because it has everything I'm looking for to maximize my development as a student-athlete,” she told TopDrawerSoccer.com. “The campus is incredibly beautiful and has a great academic reputation. The soccer program has thrived for decades under Coach Jerry Smith's leadership and carries a tradition of excellence. The WCC is one of the premier soccer conferences in the country, and Santa Clara has a possession style game, which is a perfect fit for me.”

A technical, attack-minded forward who likes to take on players and run at defenders, Turnbow scored 15 goals and had 10 assists in 16 ECNL Games last year.

Along with the prominent history of the Broncos women’s team, she was convinced that this was the right place for her by the coaches.

“Jerry Smith and the entire staff are absolutely amazing,” she said. “I'm confident they'll continually challenge me athletically and personally to reach my goals. The team is very family-oriented which is important to me and I can't wait to be a part of it.”

“The atmosphere is very friendly and the university is 100 percent committed to their soccer program,” Turnbow said. “The combination of academics and athletics at Santa Clara is exactly what I'm looking for to maximize my development as a student-athlete.”

Turnbow is the first verbal commitment to Santa Clara for 2017.

A versatile player who can play in multiple spots on the field, Allison Raniere found the right fit in Eastern Washington, where she’ll head next fall.

“I fell in love with the coaching staff and can't wait to make their first few years at Eastern memorable,” Raniere told TopDrawerSoccer.com. “The girls are great and the area is beautiful, I am in need of getting away from Arizona, so I can't wait to start a new journey in Washington. I am also excited to be attending a smaller school like Eastern because of the community that it provides and the personal touch it gives to all the athletes there.”

Goalkeeper Emily Alvarado (Texas Rush) committed to TCU for the class of 2016.

Forward Allyson Reynolds (FC Stars of Massachusetts) committed to Rhode Island for the class of 2016.

Forward Civana Kuhlmann (Colorado Rush) committed to Stanford for the class of 2017.

Midfielder Lauren Markwith (So Cal Blues) committed to Penn for the class of 2016.

Midfielder Zayne Matulis (Lonestar SC) committed to Harvard for the class of 2015.