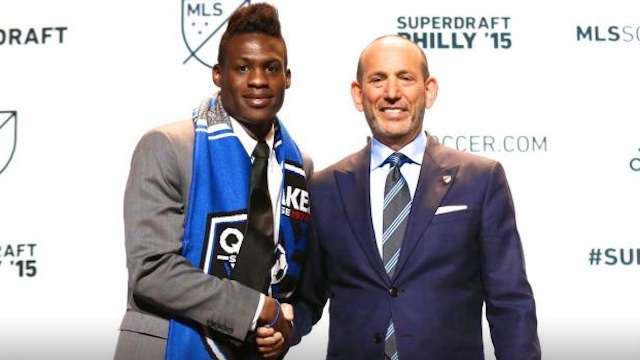 PHILADELPHIA — The first two rounds of the 2015 MLS SuperDraft are in the books. Connecticut star and Generation adidas signing Cyle Larin came off the board first to Orlando City SC on Thursday at the NSCAA Convention in Philadelphia. The expansion side added fellow Generation adidas signing Conor Donovan along with Tulsa standout Akeil Barrett in the second round to complete its first MLS SuperDraft.

There were quite a few surprises in the first two rounds. TopDrawerSoccer hands out grades for every MLS franchise from the SuperDraft.

The Chicago Fire academy is talented, and there’s not a ton of need for the first team to find immediate contributors through the draft. SIUE’s Matt Polster is an interesting option. He is a highly technical player who figures to take on a role as a center back at the professional level. Kingsley Bryce had a bit of a breakout showing at the combine. He could be an option down the road for the Fire.

The Rapids decided to go with giants in the 2015 MLS Superdraft. Sjoberg and Greenspan are 6-7 and 6-6, respectively. That’s a gigantic center back tandem. Of course, there’s the question of whether Greenspan will be available given his commitment to the Navy.

The Crew selected two players who fit specific needs in the first two rounds. Sergio Campbell is a center back, and he’s solid on the ball and physical in his presence on the field. He did extremely well during his time with the Huskies. Sagi Lev-Ari is a center forward and lives for scoring goals. There isn’t much potential with either pick as both look like finished products.

Miguel Aguilar opened a lot of eyes at the combine, but he’s been doing the same thing for the past four seasons in college. He is a delightful player to watch and could partner well with Luis Silva in the D.C. United lineup. Dan Metzger was the last selection of the day, but has a real shot at playing his way into the D.C. United first team. He is a defensive midfielder with a bite to his tackle. He likes to keep the game simple.

With only one selection on Thursday, FC Dallas’ coaching staff picked up the best left back in the draft and then kicked their feet up on the table and relaxed for three hours. Earle is a quality player who could really shine with Oscar Pareja’s coaching. He needs to refine some elements to his game, and Pareja is the perfect coach for that.

Owen Coyle’s first draft was a success. He identified areas of need and tried to address with his selections. He found a hard-working, smart midfielder in Zach Steinberger in the first round, which was a bit of a surprise at where he was selected. Oumar Ballo, one of the more athletic center backs in the draft, was snatched up early in the second round. The Dynamo capped the draft with Lovejoy who had an injury riddled career in Chapel Hill, but still looks like a bright prospect.

This selection feels like a piece for LAG II more than it feels like a pick for Bruce Arena’s first team. Maganto is a similar player to Raul Mendiola, which could make for a fun combination with the reserves. He’s great on the ball and reads the game well as an attacking midfielder who likes to control the game.

The Impact only made one selection on Thursday and they opted to go with Jamaican forward Romario Williams. The Generation adidas signing had a solid college career with the Knights. He is a physical forward who can play with his back to the goal. He needs to clean up his technique to play in tight spaces.

The Revolution traded both of their draft picks in the first two rounds.

Khiry Shelton has the potential to be an MLS all-star. The knock on him will always be his health with so many injuries in college. When he was on the field, he showed the potential to compete immediately against MLS defenders. Brandt is a left-footed winger who unfortunately played left back at the combine. On an expansion side, he should have a good shot at earning first team minutes at left wing.

New York head coach Jesse Marsch told reporters during the draft that he expected Leo Stolz to sign with the league and join the Red Bulls. Stolz is currently in Europe trying to latch on with a team there. If he does elect to join the single-entity paradise, Stolz will be an immediate contributor and an exciting prospect for the Red Bulls. Bonomo is an intriguing prospect who played better in 2013 than he did in 2014. He is good on the ball, but he needs to improve in front of the goal.

Orlando City selected Larin with the first pick and locked up one of the more promising forwards to come out of college soccer recently. The Canadian hitman could play at the No. 9 or even move out wide. He has surprisingly good feet and likes to take on defenders. Conor Donovan was a hopeful selection for the club. He is a Generation adidas player, which means more cap space is available and OCSC can wait to see if he pans out in a couple of years. Akeil Barrett should pencil in as a winger, but he likely will feature with the club’s reserve team in the immediate future.

The Union selected two skillful players in the second round. Catic is a finished product, but he is a quality finisher and should find a role quickly with this team. Bird needs to improve in some areas, but he has MLS level talent on the ball. A year with a reserve would be beneficial for Bird.

It was a busy day for Caleb Porter and his staff with four of the 42 picks. Porter opted for Notre Dame standout Nick Besler with the fifth overall pick. Besler is a very smart player. He is playing for the perfect coach to highlight his traits on the field. Thoma is a left back that can get forward as well as defend in the channels. Volesky and Belmar are an interesting pair with the prospect for one to develop under reserve team coach Jay Vidovich.

Real Salt Lake nabbed former FC Dallas academy defender Boyd Okwuonu with its lone selection on Thursday. The common refrain for Okwuonu is his size will force him to move to right back at the MLS level. He needs to improve his decision-making and his passing range, if he is forced to the outside channel.

New (old?) San Jose Earthquakes coach Dom Kinnear was all smiles after his only selection at the 2015 MLS SuperDraft. Kinnear compared Alashe to former U.S. Men’s National Team midfielder Ricardo Clark. Alashe has a similar skillset. He is a disruptive force in the center of the field and can cover a lot of ground.

Seattle wanted to get Generation adidas signee and former Gatorade Player of the Year Cristian Roldan. They had to make some moves to make it work. Roldan is a very talented center midfielder and he now has a giant chip on his shoulder from all of the teams that passed on him on Thursday. Tyler Miller was in the conversation as best goalkeeper in this class, which means the argument could be made that Seattle came away with the best midfielder and goalkeeper on Thursday.

Sporting KC had three first-round picks, and two of them were square hits. Hallisey has true potential in the midfield, though he may not be a ready-out-of-the-box kind of player. The true gem might be Abdul-Salaam, a pacey right back who enjoys living in the opponent’s third and whipping in pin-point crosses. Dia is a bit of a puzzler. With a number of quality midfielders still on the board, he was a bit of a stretch at No. 20 overall.

Defense was the name of the game for TFC here. TFC made the obvious choice with the selection of Alex Bono, the draft’s best keeper and one of the better prospects in this pool. Syracuse teammate Skylar Thomas was another solid pick, but the selection of Clement Simonin two picks earlier was a head-scratcher. Wes Charpie was a good grab in the second round, and Rivas’ slow 2014 scared off teams from a live winger with ability and potential to add to TFC’s first team.

The Whitecaps went with both sides of the coin here with Parker at the back and Banjo up top. Parker is a solid talent, and at No. 13 he was a safe pick. Banjo seems to fit the Vancouver aesthetic of athletically gifted forwards who need to refine their scoring ability at the next level. The Whitecaps needed scoring, and by the 38th pick much of the draft’s meager forward pool had been picked over. This was a good draft, but without trading further up the Whitecaps’ positioning doomed them in a draft that didn’t cater to their specific needs.