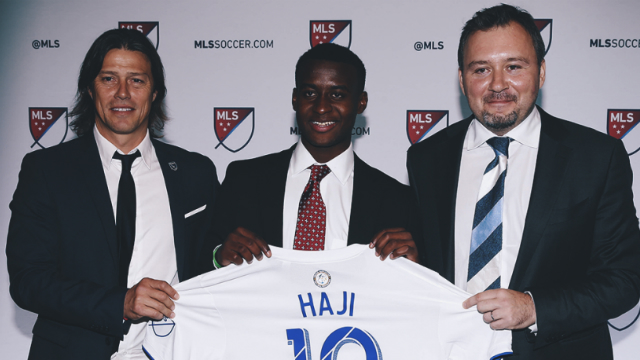 For Siad Haji, the fact that he’s set to start preseason with the San Jose Earthquakes this week is a miracle.

After being selected No. 2 by the Earthquakes in the 2019 MLS SuperDraft, Haji used his speech to provide a two-minute snapshot of his path to professional soccer.

Born in Somalia, a civil war forced his parents to leave the country when he was very young, settling into a refugee camp in Kenya. When his family was accepted into the United States, they moved to New Hampshire – quite the contrast for natives of East Africa.

It was college soccer that ultimately put Haji closet to the pro game. Growing up playing at clubs in the Northeast, he started playing collegiate soccer at New England College, a Division III school. A phone call from a friend alerted VCU head coach Dave Giffard to Haji’s potential and interest after he finished his first year in college – even though the attacking midfielder, having obtained U.S. citizenship while growing up, had appeared in youth national team camps as a teenager, and was no unknown.

Haji’s story is a reminder of the roadblocks and hurdles that can stand in the way of certain players in U.S. Soccer.

“There are guys like this that are out there,” Giffard told topdrawersoccer.com before the 2019 MLS SuperDraft. “Are there a million? No, there’s not a million. But so many times I liken to him to Darlington [Nagbe]’s story: immigrant kid, lives in our country, doesn’t have every single benefit in terms of financial exposure, ability to be with the U.S. [youth national teams] people see him, but for whatever he either can’t represent the country, he’s not ready, whatever the case may be.

“If this kid had come up in someone’s MLS Academy, and he’s a 19-year-old right now, everybody and their mom’s talking about this homegrown and how special he is. It’s just not the flavor of the day, and I get that.”

Haji’s remarkable path required plenty of help along the way. Families of teammates would help make sure Haji was setup and able to play at places like Seacoast United, where he competed during the 2015-16 Development Academy season.

But Giffard knew that there was plenty of development left for Haji when he first got to campus and had a chance to be pushed by his teammates in the fall of 2017.

“The next couple months were a huge jump for him in the day-to-day quality of environment, the other players, expectations,” Giffard said about Haji’s arrival. “I don’t think he’d ever been taught or asked to defend before. He had a huge learning curve that first fall and that kind of got him rolling as we moved forward.”

After a strong first season at the Atlantic 10 program, Haji remained overlooked. Despite possessing a skill set seldom seen in the collegiate game, none of the conference coaches voted him for postseason awards in his first year at VCU. His stats weren’t off the charts (two goals, eight assists), but Haji’s quality in the final third was fairly easy to spot.

“His ability to combine and play in tight spaces, his technique is a different level than you see from most kids, at least certainly in our country,” Giffard said. “The vision and the feel for the game and the God-given qualities and tools are really good and would fit into the game at a really good level. The pieces that he missed developmentally not being in an ultra-professional environment for so many years are some of the final polish pieces.”

Regardless of postseason awards or not, Haji brought several different things to the table. Citing Iniesta as one of his favorite players, his ability to create took off in the 2018 season.

Scoring five goals and adding 10 assists for the Rams, the conference awards finally came, as he was named Atlantic 10 Midfielder of the Year. For Giffard, his final third influence is both what makes him special and one of the many traits that can still be improved.

“He’s got an exceptional eye and weight for a final pass, he wants to be the provider more than he wants to be the finisher, and that’s another piece he’s going to have to continue to develop that he got better with us, but he’s going to need more of it,” Giffard said. “More final third finishing runs, looking to get a little separation, take chances, being the third man that gets slipped in, being the guy that joins in the box, finishes off stuff at the back post.”

His college coach also thinks that Haji is just starting to scratch the surface. It’s an opportunity for San Jose head coach Matias Almeyda to shape the prospect into the best fit for the Earthquakes.

“You can’t really say it for everybody, but he’s a guy because of his technique and brain, he leaves himself open to going in a lot of different directions,” Giffard said. “I could see him playing a lot of different roles for a lot of different teams, because it’s not the final product. When you look at him, it’s not going to jump out to you, ‘obviously he’s this, or obviously he’s that,’ because he’s a little bit like clay that can still be molded. Even though he’s still 19, he learns very quickly and I think there’s a big jump that’s going to [happen] in the first year that he’s going to be a dramatically different level of player at the end of this year than he is now.”

His path to this point is a reminder that players continue to slip through the cracks, and that college soccer remains a viable option to identify talent that can continue developing and reach their potential.

“There are kids out there that they just need opportunities,” Giffard said. “A little bit of a higher level to play at to bring out some of the things that are already natural gifts in them and then a chance to be able to then move on to the next level and you’d like to hope that there is an opportunity and a pathway there for them to do the same thing in the professional game, grow.

“There are so many players in our country, and there are not enough places for those players in the league as young kids. The college game will continue to serve those players and help them to have opportunities to continue to develop until they are ready to take the next step.

Fortunately, Haji was one of those kids that a college program found. And while he’s no sure thing at this point, it bodes well for the game in the United States.

As preseason beckons, the 19-year-old has been prepared for this moment.

“It’s going to be a lot of work,” Haji said after getting picked. “But I’m ready for the pressure, ready for everything.”