Harvard's women will be challenged in 2012 Three of the last five seasons, Harvard has emerged as winners of the Ivy League.

Tasked with continuing that success this fall, it’s going to be an uphill battle for the Crimson with the loss of Melanie Baskind, who was selected as the league’s Player of the Year last fall.

That, combined with the rapid improvement of Yale, Princeton, Dartmouth and the consistency of Penn, makes for an interesting title contest this season in the Ivy League.

On the strength of an unbeaten season in the Ivy League, Harvard just managed to sneak past Penn and capture its third league title within the last five years.

Replacing Ivy League Player of the Year Melanie Baskind is going to be one of many big questions that the Crimson must answer in order to repeat the success of a year ago.

Coming back into the fold is dynamic midfielder Peyton Johnson, who picked up First Team Ivy League honors, along with Meg Casscells-Hamby, another midfielder.

The caveat of course, is how the six newcomers can step into the Division 1 level and contribute right away, because they’ll likely be needed in order to keep things rolling in 2012.

Last year’s inability to close out the Ivy League title still stung a bit for Penn in 2012.

“I thought over the course of the season we were the strongest team in the league, I was disappointed that we weren’t able to get in the tournament in the end,” head coach Darren Ambrose told TopDrawerSoccer.com earlier in the year.

Filling a couple of holes in the defense is high on the list for the Quakers to accomplish during the preseason. Kaitlyn Moore showed well during the spring to help plug in those gaps, while forward Megan York is expected to help lift the offense and Erin Beck to provide midfield stability.

Ambrose has lofty goals for the team heading into the upcoming season.

“We expect to be a team that is playing every weekend to win, to be in the running for the Ivy League title again,” he said. “That is kind of an expectation for this group I’ve got. They’ve been there, they know what it’s like to be there.” 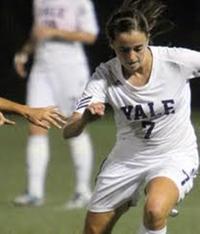 With the Ivy League Rookie of the Year Melissa Gavin leading the charge, and plenty of players returning from last year, there are high expectations for Yale to contend for honors in the conference.

“We have a lot of experience coming back, we only graduate one starter,” head coach Rudy Meredith told TopDrawerSoccer.com. “We should have the most experienced team we’ve had in awhile as far as returning players.”

The number of returning players affords Meredith the opportunity to sort of pick up where the team left off from spring when they kick off preseason.

Another reason for optimism for Yale is who they have in goal. Adele Jackson-Gibson, the expected starting goalkeeper, is the best athlete on the team according to Meredith as she also runs track and offers a strong option in net. She broke her arm last year and having her healthy is going to be a big boost.

Of course, Gavin being in just her second season is another huge plus, as she’ll spark the attack alongside sophomore forward Meredith Speck, who was called up for the U23 WNT this summer.

While Meredith hinted that his side may have to gain ground on the likes of Penn, Princeton and Harvard this fall, don’t be surprised to see the Bulldogs near the top in 2012.

Out of conference, the Brown put together a solid record, but once Ivy League competition hit, the Bears couldn’t muster enough in conference success to contend for first place.

While some of last year’s peak performers won’t return, All-Ivy goalkeeper MC Barrett will lead the team’s back, while senior Eliza Marshall is one of the keys to the attack.

Players like Kiersten Berg and Chloe Cross will need to step up as well to hope cope with departures.

Three of the top players from last year’s squad graduated, leaving lots of questions ahead of this fall’s season.

If Columbia is to successfully jump into contention, it’s going to require big years from forward Alexa Yow, defenders Chelsea Ryan, and Shannon FitzPatrick, to go with midfielder Coleen Rizzo.

After a down year in 2011, most coaches are expecting the Princeton Tigers to come roaring back.

Head Coach Julie Shackford learned a great deal from last year, which featured a number of close calls that never seemed to go their way.

“It was really one of those times where I was like ‘soccer is such as humbling sport.’ We would be in teams’ ends and then lose on the counter in the 89th minute,” she told TopDrawerSoccer.com earlier this year.

Converting scoring chances was the focus during the spring season, and getting better return from attacking options like forwards Jen Hoy and Liana Comacchio should help the Tigers back into contention.

Another program on the rise in the Ivy, Dartmouth is entering its second year under head coach Theresa Wagner, a former assistant coach at Stanford.

Despite a second-to-last finish in 2011, Wagner is optimistic that the team can continue to build and progress, as she hopes to do on a game-by-game process throughout the season.

“Every game, can we improve and continue to develop – and if we do that our end goals of winning the Ivy League definitely enters more into the realm of possibility,” she told TopDrawerSoccer.com earlier this year.

Seven players are coming in to help replace the six graduates from last fall. The team’s three senior co-captains – center back Aurelia Solomon, and midfielders Emma Bush and Kim Rose will be critical to the team’s success in the middle of the field and set the platform for a year full of accomplishments.

To dig Cornell from off the bottom of the Ivy League, Maneesha Chitanvis needs some help in the goal-scoring department.

The rising senior and Honorable Mention All-Ivy in 2011 scored five of her team’s 12 goals on the year, but didn’t get much support from the rest of her squad. If players like Xandra Hompe and Kerry Schubert can help pick up the attack, a turnaround could be in the cards.

Of course, the team needs to be better defensively, after also conceding 31 goals a year ago.