­CHESTER, Pa. — It’s safe to say that Notre Dame midfielder Patrick Hodan is on a bit of a hot streak.

A goal on either side of the half from Hodan propelled Notre Dame to a 2-0 win over New Mexico and into Sunday’s national championship. Hodan has scored in six straight games, raising his tally to seven during that streak. 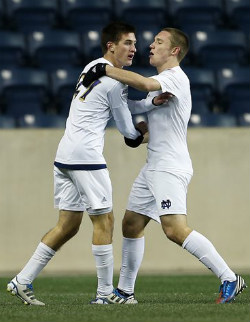 The pair of strikes punctuated a dominant 90-minute shift from the Irish in chilly conditions, as they reached the title game for the first time in program history.

“I think it was important we got the first goal,” Irish head coach Bobby Clark said after the game. “That put is in a position where we could control the tempo. And I thought we did that fairly well. I thought we did that fairly well. The second goal made it a little bit easier, but it was always going to be a hard game. It was a hard team to break down.”

That early goal came just seven minutes into the game. An errant pass from Lobos midfielder Ben McKendry found the feet of Irish talisman Harrison Shipp in s space. The midfielder wizard shrugged off a challenge from Michael Calderone, going on a bursting run towards the top right corner of the New Mexico box. Shipp spotted the run of midfielder Patrick Hodan, and slipped him in behind the Lobo back line. Hodan had the time to take a couple of touches and finished with his left foot past Michael Lisch.

“[Calderone] actually tried to foul me,” Shipp said. “Grabbed me from behind. I think I just kind of spun out of it and he thought, I’m pretty sure, that the ref was going to call a foul. The guy kind of froze. And then I saw Patrick making a run and I figured instead of playing it out wide I’d wait a second and try to get him going inside so he can create coming onto his left foot. And it worked out perfectly. He had a good touch inside and played it right inside the post just like Patrick does most games.”

Said center back Kyle Venter: “I thought we came out pretty strong the first seven-eight minutes, and we were on top of them. They got a half-chance and Holdan got it on his left foot, put them up 1-0. Whether you want to say it was against the run of play or not, maybe it took a little win out of the sails.”

It was the first goal conceded by New Mexico in 317 minutes of play in the NCAA tournament, and the tally signaled the Irish ascension into the game. Shipp battled with Venter, dancing in and out of space looking for gaps in the New Mexico defense.

An effort from Niko Hansen that went straight to goalkeeper Patrick Wall represented the best chance of the half for the Lobos. At the other end, forward Vince Cicciarelli occupied Venter and center back partner Nick Miele, opening space for Shipp to possess the ball and create danger. He nearly turned something into nothing with a raspy volley close to halftime, though it sailed harmlessly wide of Lisch’s goal.

Chances were limited in the early stages of the second half, as the Irish could sit on a one-goal lead, defending with two lines of four. James Rogers had a wild shot in the 63rd minute miss the frame, and a couple of corners that led to the nothing.

A minute later, Hodan struck again. Cicciarelli deflected a low cross into the six-yard box past Lisch but onto the crossbar. Hodan was quickest to the ball, heading over Lisch for his second of the night.

The second goal capped off what was a dominant performance on the evening, as the Irish weather a few Lobo set pieces late in the second half, though couldn’t find a way past Wall, as the defense held firm.

“I think they kept the ball in our half more than we would’ve liked, I think we would’ve liked to be up the field, but they switched to being direct so it was hard for us to get out of our half,” Shipp said. “Although that happened, I don’t think they looked to dangerous. They swung the ball around, but our guys did a great job of winning headers. They’re a big, physical team, they like to play the ball in the box, but I don’ think we had too many problems with it.”

There was a sense of what might have been from the Lobos, who weren't satisfied with the performance.

"We didn’t come off the field feeling that we were at our best," head coach Jeremy Fishbein said. "I think you look at it you maybe don’t give the opponent enough respect in that they took us out of our rhythm. They were very good, but we weren’t up to our par today, that’s the real disappointment."