Colorado Rush forward Lindsey Horan has signed a 2-year contract with French professional side Paris St. Germain, Rush Technical Director Erik Bushey and the player herself confirmed today. In signing the deal, Horan walks away from a scholarship with the University of North Carolina.

Horan was set to begin this fall at UNC, a school she verbally committed to a couple of years ago.

Horan also will not be competing this fall in the U20 FIFA Women’s World Cup next month in Japan, which will be seen as a major blow to Steve Swanson’s team.  She explained that she suffered a meniscus injury and tried to play through it, but then was advised by her medical team to have a procedure done recently. She told TopDrawerSoccer.com that she begins rehabilitation Friday and that it is uncertain when she will be cleared to play. Both Horan and Bushey described the injury as “minor.” 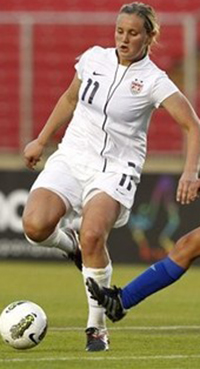 Bushey explained that PSG wants Horan ready to play for them as soon as possible, but Horan added that she believes if it were not for the injury she would have been allowed by the club to play in the World Cup. Her reporting date for PSG preseason is July 31.

“The contract has been signed and returned to PSG and receipt has been acknowledged,” Bushey said. “Now it is pending international clearance, but she should be good to go. I have inquired to a certain level about possible red flags with FIFA or work permits and it looks good. I guess we’ll get final confirmation when we hear about that.”

Horan, who said terms of the two year deal are “very generous,” said the most difficult aspect of the decision to sign was choosing not to attend North Carolina.

“I love the school. They also gave me a very generous scholarship,” she said. “That’s where my heart’s been for the past few years.  It was hard to go away from that. I talked to Anson (Dorrance, UNC head coach). Everything was OK, but the main thing for me in deciding was giving that up.”

For North Carolina’s part, Associate Director of Athletic Communications Dave Lohse told me head coach Anson Dorrance wouldn’t be commenting on the story, other than to wish Horan the best.

A fast, slashing attacker with strong finishing ability, Horan has been at or near the top of our TopDrawerSoccer.com Players To Watch national rankings since her U15 season in Colorado.

Bushey explained that the deal was largely the work of Rush Soccer Board President Jerome de Bontin, a French native who has been heavily involved with both French professional and American youth soccer.

“We went to Lyon last year to train with Olympique Lyon,” he said. “She had the opportunity last year to entertain the idea of signing with Lyon and decided not to, even though it was her dream to be a pro. She wants to be a pro and play for her country. She had a very unique experience and had it again this year, through Jerome, who was able to network and have this discussion with PSG.”

Horan agreed that signing the professional deal is a dream-come-true for her.

“Since I was U15 I’ve always thought about going overseas to play professionally," she said. “It didn’t become realistic until this year when I started talking to Tim (Rush President Tim Schulz) about it. It was a great experience going over there and playing with them. I loved it over there.”

For now Horan will concentrate on rehab and improving her French. She said she is thankful for the opportunity and hopes younger girls will think more about working for similar opportunities in the future.

Bushey agreed that the signing of a girls’ player straight out of high school is a major precedent, but doesn’t expect the floodgates to open quite yet.

“Any time a barrier is broken you think there will be more to follow, but procuring a college scholarship is an incredible thing and is the goal of most players at our club and indeed it is the goal of our club. In Lindsey’s case she has long said she wanted to be a pro, so her different goals meant different goals for us.  Whether the player is male or female, we’re about trying to make those goals a reality.

“Lindsey has taken the path less traveled, so, will there be others? Yes. Will it be an annual event? No chance. Players like Lindsey Horan are few and far between. She doesn’t mirror anyone else when it comes to her dedication to training and succeeding.”

Bushey said there will be no developmental fee paid to Rush as part of the transfer, as sometimes happens with the signing of young professionals.

While a handful of American women’s players have begun playing professional overseas with the demise of the American professional league WPS, this has typically taken place after the players completed their college eligibility.  The value of a college scholarship outweighs nearly all of the professional contracts available to women at home and abroad. Horan’s deal was reported by one outlet to be worth a yearly salary in six figures.

PSG was purchased by a consortium from Qatar in 2011. The organization has been aggressively buying male professional players ever since, most recently signing former Barcelona and Inter Milan star Zlatan Ibrahimovic for combined fees of over $200 million.