How Army prepared McGraw for the pros 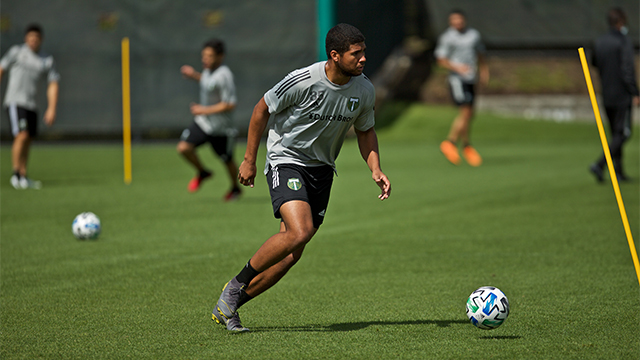 As the MLS is Back tournament kicks off this week, former Army men’s soccer standout Zac McGraw will be hoping to get his chance with the Portland Timbers.

McGraw earned a first-team contract after becoming being the first West Point player to be selected in the MLS SuperDraft in January. His time at the Patriot League program boosted his preparedness for pro soccer.

“A kid like Zac benefited from going to play college soccer because he needed that time to really grow into his body and to understand what being a professional is like,” Army head coach Russell Payne told TopDrawerSoccer.

Playing professional soccer was always a dream of McGraw’s. But back when he was considering college soccer opportunities, he and his family kept things realistic, valuing the opportunity to play in college and earn a degree. Originally from Southern California, where he played club soccer at FC Golden State, UCLA was high on his list.

But a positive experience at a summer ID camp at West Point ahead of his sophomore year of high school piqued his interest.

“It’s a beautiful campus, that’s what attracts a lot of people, it’s right on the Hudson River,” McGraw said. “The coaches liked me in that first camp even though I was so young, they were impressed.”

Taking in the feedback from Payne and the rest of the Army staff, McGraw eventually made the decision to commit to the program towards the end of high school. He knew that given Payne’s connections and background in high-level environments – prior to taking the job at Army, Payne worked as an assistant at Maryland and has been on staff as an assisstant with several U.S. men’s soccer teams – McGraw could be in position to give pro soccer a shot if the opportunity was there at the end of college.

And when he got to campus as a freshman, McGraw was an instant-impact player in the Patriot League. He was named First Team All-League after his first season, and made a profound impression on Payne.

“It’s hard to pass up, looking at him, he’s 6-foot-4, built like a machine but he had really soft feet, grew up in Southern California and played in Latino men’s leagues,” Payne said. “So, he has very good feet for his size and he’s a tenacious defender.

“He would take new concepts that we brought to him as a center back – if we needed him to carry the ball out and break lines on the dribble, we needed him to make diagonal passes, we need to work on his left foot. He really took on every coaching point you gave him and was able to put into practice very quickly. So, you could see his level of talent was there.”

After a dominant sophomore season, where he was named Patriot League Defensive Player of the Year, according to Payne, the defender considered leaving – either attempting to turn pro or transferring to another school that offered a more traditional pathway from college to the pro ranks.

Payne made a pitch to McGraw about the value of sticking it out with the Service Academy.

During his time in college, McGraw faced a diverse range of high-level opponents as well, reinforcing his talent level to both himself and his coach. Payne said the team took a trip to England during one spring, where McGraw excelled against Under-23 sides from Birmingham City, Burnley and Queens Park Rangers. During another trip, they played an exhibition match against a team from a Mexican military. Again, McGraw excelled. He would stand tall in games against top college opponents as well, whether it was in the fall or spring exhibition.

And Payne was able to get McGraw exposure in pro environments when he was back home.

Given Payne’s experience working with high level players – he likened McGraw to Omar Gonzalez, who he coached at Maryland – his recognition of McGraw’s potential can’t be overlooked. Along with that talent, his head coach cited the work that the young defender put in during breaks that put him into position to get a shot in MLS.

“I've got to give the kid credit because he invested a lot in himself," Payne said. “The summer time is a really crucial time for all youth players and college players. Most kids’ summers are really wide open, they can do whatever the hell they want for 10 weeks. Our summers at West Point are split, half the summer you have off and half the summer you have training at school. Zac really invested in himself.”

While his near-term future is set in Florida, where McGraw is hoping to see minutes, Payne thinks big things lie ahead for the center back down the road.

“The sky is kind of the limit for him,” he said. “The interesting part about that is that I wouldn’t have said that five years ago. We’re fortunate in America that we can actually have late bloomers.”