One of the nation’s premier rising programs, the Hoyas are stocked with depth and talent like never before, and enter this season aiming to take the program to a place it has never been.

“We’ve been going over our team goals, and the captains decided that getting to the semifinals of the Big East tournament [is one of them],” junior forward Steve Neumann told TopDrawerSocer.com. “It is something we haven’t done yet as a team, and would be a big stepping stone for even bigger things in the NCAA tournament.” 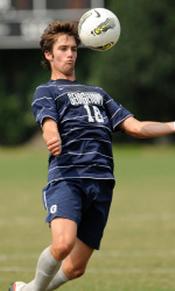 Added head coach Brian Wiese: “That’s a real stated goal for our guys. We haven’t been their yet as a program since they’ve had that event, the Big East Semifinal/Final hosted there, and it’s something I think the guys want badly and they have a good focus for it.”

Neumann, a slashing forward who scored 11 goals and added 7 assists in 2010, is one of many reasons for the optimism. With what is perhaps the best team Wiese has ever had in his seven years at Georgetown, the blend of talent and experience appears to be right on the money – at least on paper.

However, the key to any success the team expects to have this year is the more experienced players.

“Our senior class is really important,” Wiese said. “We have guys like Ian Christianson, Tommy Muller, Jimmy Nielis and Andy Reamer and Jon Snyder, these guys have all been around the block, and they’ve all played really from day one. That kind of experience, you’re hoping really reap some benefits coming into their senior year.”

That’s not to say there isn’t a strong supporting cast to compliment the seniors. Along with Neumann, U.S. U20 goalkeeper Tomas Gomez is the expected starter between the posts, and defender Tyler Rudy offers versatility along the back line.

Then, there’s also a fairly strong incoming class that could impact how things shape out this season. Along with Melvin Snoh, a fast forward from the Philadelphia region, Development Academy goal-scoring phenom Brandon Allen of the New York Red Bulls Academy

Wiese knows that they will be an integral part as well.

“I think the integration of a really good group of freshmen into the team and how they find their roles, how can a set of good players sitting on the bench handle that role and come in and give us something when needed,” he said. “All of those components that go into making good team chemistry is going to be vital for us.”

Of course, simply getting through the Big East unscathed is going to be a tall task for the Hoyas. Voted by coaches to finish third in the Blue Division, the Hoyas know that it isn’t going to be easier.

Connecticut is expected to be tough as usual, while Notre Dame is always a threat and Marquette captured the division last year and Providence and Seton Hall have new coaches.

“You run through the entire table everyone is a challenge, and everyone has always been a challenge coming through,” Wiese said.

The Hoyas aren’t getting carried ahead of themselves of course, and breezed through preseason with wins over Old Dominion and Villanova. They open the season on Friday, August 24 against a tough Virginia squad.

And that’s what they are looking forward to the most – getting started.

“Everyone’s real excited to get the season going, been in the weight room, working on our fitness, getting everything done so we’re all ready for the season,” Neumann said.