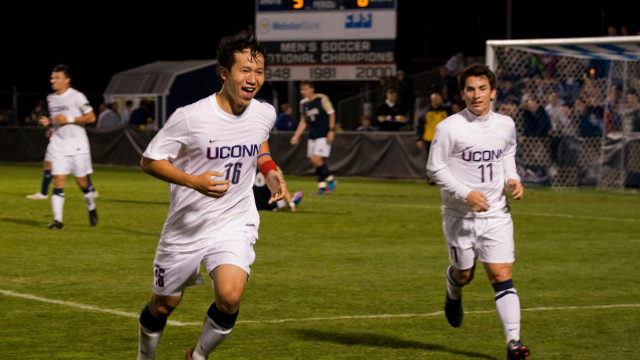 It wouldn’t have been a huge surprise if either #2 Connecticut or #7 Georgetown slipped up this past weekend.

Both programs, in the midst of extremely strong starts to the 2012 season, headed into last weekend unbeaten, with the two sides scheduled to meet this Wednesday in Washington, D.C.

With such a big matchup on the imminent horizon, sometimes even the best of teams get distracted, and overlook the teams in front of them. However, neither the Huskies nor Hoyas suffered a drop-off, as both won against Big East opposition this weekend.

UConn had the more difficult match of the two, holding on to best #11 Notre Dame 2-1 in front of a sold-out crowd in Connecticut. Senior Carlos Alvarez’s huge season continued, as he scored a goal and set up Flo Liu’s game winner. 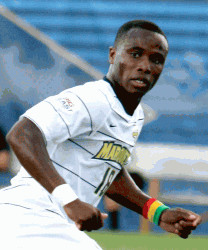 Meanwhile, the Hoyas did enough to beat Pittsburgh by a 3-1 score on the road. Freshman forward Brandon Allen’s high-scoring season continued as he found the back of the net twice. Junior Steve Neumann had a goal and set up Allen for his two goals, as the Hoyas did their part ahead of what should be one of the games of the season to this point.

However, Georgetown head coach wasn’t getting carried away by the result.

"I think tonight was an uneven performance and Pitt has talented, confident guys that made it hard for us," he said in a press release. "In the end, we had enough quality players on the field to make the plays we needed to get three points on the road, which is something we'll never be upset about."

Ten in a row for #8 Marquette

While the other two undefeated Big East teams prepare to face each other, the third team with a perfect mark kept its momentum rolling on the road, as Marquette pocketed a 2-0 win over Providence.

At this stage of the season, the Golden Eagles are sure to consider themselves conference contenders alongside the Huskies and Hoyas, and are making significant strides even without an injured C. Nortey, who has battled nagging problems throughout the year.

The defense once again provided the offense, as Axel Sjoberg popped up to score again, while defender John Pothast also found the back of the net. Pothast and goalkeeper Charlie Lyon earned special praise in wake of the win.

“I thought Pothast came of age today, and Lyon was phenomenal,” head coach Louis Bennett said in a press release. “He made two unbelievable stops and I was impressed with his organization. What Charlie did today, he really earned the right to say that this was a shutout. If he wasn't in goal, I don't know if we would've had that."

Being the consensus #1 team in the nation obviously means playing with a target on the back and getting the best shot from every game.

That can make road games even trickier, and current #1 Maryland passed a huge test against the College of Charleston, winning 3-2 behind two goals from central defender London Woodberry.

Defense was always the question about the Terps and their title bid this year, and twice they fell behind on Saturday night, as Charleston took 1-0 and 2-1 respectively at different portions of the game.

But Maryland’s offense did just enough to grab the win on the night, and it gives the Terps a nice week off before jumping back into conference action against Virginia this coming Friday night.

Tar Heels come from behind to beat Blue Devils

In horrible weather conditions, #3 North Carolina bumped past Maryland in the standings (with one more game played in conference) by beating a struggling Duke side 2-1 thanks to an overtime goal from senior Jordan Gafa.

Discipline issues plagued the Blue Devils throughout the evening, and Duke finished with nine men on the evening. However, they were on course for a 1-0 win at home when Cameron Brown’s shot from distance eluded the usually steady James Belshaw to tie the game with under five minutes to go.

Playing overtime down two men, it was only a matter of time before Carolina scored the winner, and Gafa obliged with a gorgeous long-range finish in overtime.

Both Cornell and Brown seem poised to make a run at the Ivy League title.

Each Ivy program got its conference schedule off on the right foot over the weekend. The high-scoring Big Red of Cornell put three past Pennsylvania(m) in a 3-2 win, with Daniel Haber bagging his 15th goal of the season, as they extended their winning streak to nine overall.

Meanwhile, the Bears beat Columbia at home, as Tommy McNamara and Daniel Taylor scored second half goals within six minutes of each other to pick up a first three points of the Ivy League campaign

A poor start to the season had pegged the Eagles back, with just two wins the first six games of the season.

But #31 Boston College continued on the road to recovery, getting a first ACC win of the season, a 2-1 result over North Carolina State(m) at home. Charlie Rugg’s return to health has been a huge asset to the recovery, as he scored a goal and had an assist in the win over the Wolfpack (after scoring twice midweek against Rhode Island), earning him TopDrawerSoccer.com player of the week honors.

The next hurdle for BC is to continue the recent success and climb up the ACC standings.