Maryland remains at #1 in the top of the TopDrawerSoccer.com Tournament 48 National Ranking this week following a pair of wins this week.

Connecticut, North Carolina and Akron continue to stalk the Terrapins with their wins on the week. 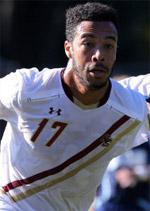 New entries to the ranking this week are Tulsa as an At-Large and St. Francis (PA)(m) as the projected Northeast Conference automatic bid recipient.

The complete men's college soccer ranking can be found here.

Meanwhile, Boston College’s Charlie Rugg is our Men’s College Soccer Player of the Week after his offensive exploits for the Eagles. Rugg scored three goals and added two assists as BC defeated Rhode Island 4-2 and NC State 2-1.

M: Tyler Engel, SMU – Scored twice in 75 seconds to key one of the Mustangs’ two wins.

M: Carlos Alvarez, Connecticut – Scored a goal and added 3 assists as the Huskies won a pair of matches.

M: Cameron Brown, North Carolina – Scored a late tying goal in a win vs. Duke(m) and added the assist on the golden goal vs. Wofford.

F: Brandon Allen, Georgetown – Scored twice and added an assist as the Hoyas won a pair of matches.