Hubbard: From Tribulations to Triumph 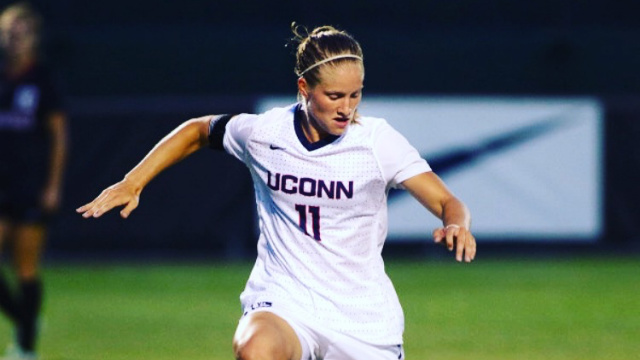 Sure. We’ve all them. That’s life, right?

Maybe you didn’t study as hard as you should have for that exam. Maybe you picked the wrong choice of words in that fight with your significant other, leaving you a party of one. Maybe you stayed out too late the night before the big game leaving you gassed by the end of the first half, or worse, benched.

I’ve always wished that life would give out Mulligans; second chances to perform an action when the first chance inevitably goes wrong. I can definitely think of a few instances in my life where I would pull the Mulligan card, but without exposing too much of my dirty laundry and/or baggage, I’ll keep this post strictly related to soccer.

My Mulligans would coincide with four instances where I cut or pivoted in a soccer game, heard a loud “pop,” and then found myself lying on the ground. This “pop” was not only the sound of my anterior cruciate ligament tearing, but it was also the sound of the next six, or nine, or even twelve months crumbling beneath my feet.

That’s right – during the course of my soccer career, I tore my ACL for a grand total of four times (#ouch). While I certainly wish that this were not the case, I can proudly say that I had a pretty good career.

I spent the majority of my life growing up in a suburb outside of Scranton, Pennsylvania (yes, I am basically Michael Scott for those of you wondering). After high school, I attended the Pennsylvania State University, where I was lucky enough to wear the Nittany Lion jersey for two seasons.  Due to a number of personal reasons, I then decided to transfer to the University of Connecticut to play for Len Tsantiris, the second-winningest coach in NCAA Division I history. What I thought would initially be a two-year commitment at UConn actually turned out to be a four-year tenure, with two medical redshirts and countless hours spend in the Huskies’ athletic training room.

After six seasons of college soccer, I had that absolutely terrifying moment that no one really warns you about.  What are you going to do with the rest of your life?  At the time, I was only three ACL’s deep, but riddled with a bunch of other aches and pains including sport-related concussions, sprained ankles, and broken hearts. I decided to move to Boston and enroll in physical therapy school - since being a student was the only thing I knew how to do.

I spent the next three plus years reading big books and eating Ramen. By my last year in school, I still had absolutely no idea what I wanted to do with the rest of my life. Nothing got me excited the way that soccer did. You know what I’m talking about. Nothing in PT school even compared to the feeling of lacing up new Nikes and taking those first few steps onto a freshly cut Morrone or Jeffrey Field.

During my last year of school, I spent a lot of time traveling and engaging in self-discovery. For my clinical rotations, I was lucky enough to spend some time in San Diego, working for a small private-practice outpatient orthopedic clinic in Sorrento Valley. It had been quite some time since I knocked around a soccer ball, but in the spirit of trying to make new friends in a new place, I signed up for a social sports league. Spoiler alert: I tore my ACL in the first game and made zero new friends.

Needless to say, this was a huge blow for me. I was 3,000 miles away from home, hobbling around without any real support from friends or family. Luckily, I was able to finish my clinical and fly back to the East Coast for surgery. As you can imagine, I then spent the better part of the next year picking up the pieces and rehabbing both my knee and mind. Ten times out of ten, I will argue that the psychological trauma of injury is much harder than the physical rehabilitation – but I will save that for a later post.

By graduation, I was ridiculously depressed. I know the “D” word scares a lot of people, but nearly 1 in 5 Americans struggles with anxiety or depression, and that’s just a fact. I spent hours laying in my bed thinking about the rest of my life. What was I going to do?

And then, in a job interview, it hit me. My now boss asked me bluntly, “What is your biggest failure in life?” *Insert sucker punch to the gut here. * While my initial reaction was to say, “Well Sir, exactly how much time do you have today,” I sat up straight and collected myself. My biggest “failure” in life was not being able to fulfill my childhood dream of playing professional soccer. And man, did I get so close.  When I was younger, I remember practicing in my driveway every night until 9 or 10 PM, cutting the ball around my Dad’s snow tires and shooting it into the flipped over wheel barrow. I was certain that I was destined for greatness.

After that interview, I went home and took a long hot shower. That’s where I do most of my “big thinking.” Having not yet addressed the psychological trauma of what took place over the better part of the last decade, I decided to put a pen to paper and start a blog (nerd alert). I aptly titled my site, “Just For Kicks,” as I was writing content just for kicks. It was my way of coping with life’s biggest “failures.”

With the focus of ACL prevention and performance enhancement, I started to write posts on ACL basics, tips for the first few weeks of rehab after surgery, and how to cope with the psychological side of injury. Before I knew it, people were actually reading my blog. I started to gain a large following on Instagram and was receiving messages from people around the globe appreciating my work. I started to realize that though I am not able to safely play soccer anymore, I can still contribute to the game I love and help others escape a similar fate.

Just For Kicks is currently a non-profit initiative offering pro bono education for players and teams on the importance of ACL prevention. Over the past six months, I have traveled around the state of Massachusetts, offering free educational lectures to different clubs and youth associations, talking to players, coaches, and parents about some of the very real dangers associated with sport. Unlike other programs that often target sports medicine clinicians, it is my goal to make easily understood and ‘digestible’ content for my audience. I believe that injury prevention (or perhaps more accurately termed injury reduction) is often overlooked until a player is sidelined. It has become my mission to keep players like me in the game for as long as possible.

Ralph Waldo Emerson once said, “To leave the world a bit better, whether by a healthy child, a garden patch, or redeemed social condition; to know that even one life has breathed easier because you have lived – that is to have succeeded.” I am a firm believer that everyone in this life is significant. We all have an impact on the world around us, so it might as well be a positive one.

If you or someone you know is interested in ACL prevention or rehabilitation, please head over to my site at http://www.justforkicksboston.com and check out all of my latest.

A former Division I college soccer player, Julie Hubbard is a Boston-based Doctor of Physical Therapy with clinical interests of ACL rehabilitation and injury reduction. When not working in the outpatient orthopedic clinic, she enjoys spending time writing, running, boxing, and playing with her two favorite nephews.