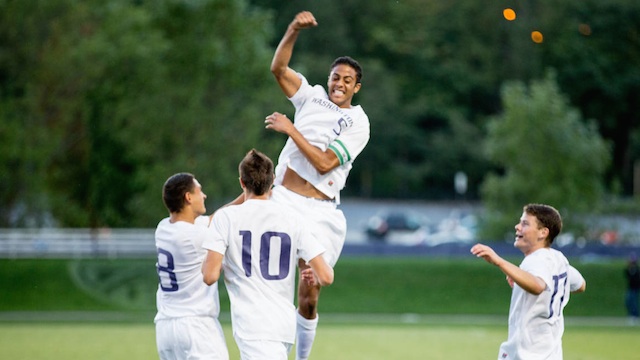 The Huskies won the Pac-12 for the first time since 2000 last year behind a blinding array of talent from front to back. Even the loss of All-American keeper Spencer Richey early in the year to a season-ending injury couldn’t slow the Huskies’ train. There aren’t many, but there are still losses for which coach Jamie Clark has to account. Defenders Taylor Peay and Michael Harris, he of flip throw fame, both graduated, leaving room for replacements at the back. Richey is reportedly 100 percent ready, though, and that should help ease in the new defensive crop.

The Huskies will be nationally good pretty much everywhere else. Andy Thoma, Cristian Roldan and James Moberg played 90 minutes for the Portland Timbers U23 side against the MLS Homegrown team during the MLS All-Star Week in early August, and all three showed well. Roldan was given the No. 10 shirt for the season, and the partnership between him and Moberg in the midfield will be one of the nation’s best. Incendiary striker Darwin Jones turned down a Sounders Homegrown deal to play another year, and he could easily crest double digit goals in 2014. With Michael Gallagher able to organize the back, Washington has to be a favorite again to repeat.

Few leagues anywhere can boast this kind of top-heavy setup. Washington might expect to build some kind of substantive league lead in just about any other conference, but the behemoth Bruins are always lingering just within view. Leo Stolz sent shockwaves through college soccer when he opted to return to UCLA for his senior season in lieu of an expected jump to the pros. That gives UCLA a Hermann Trophy frontrunner in its midfield and instant national championship street cred. And yet the Bruins will still have to fight desperately just to win their own league.

UCLA brought in a ridiculous recruiting class in the offseason, even after John Requejo Jr.’s defection to Xolos. That includes Gatorade High School Player of the Year Abu Danladi, who can be an impact player up top from day one. Forward Larry Ndjock is a quality transfer from Loyola (MD), and the returning players make the Bruins a team to be feared. Earl Edwards Jr. is one of the nation’s best keepers, and the return of freshman All-American Michael Amick makes the back line one of the nation’s best. With Jordan Vale and Felix Vobejda back in the midfield after combining for 15 points last year, UCLA and Washington will wage a heck of a battle for No. 1 this fall.

Cal had an unbelievable start to the 2013 season with consecutive wins over No. 3 Georgetown and No. 2 Maryland, but the heavy steam of progress soon slowed. After going unbeaten in their first five Pac-12 games, the Golden Bears lost three of four and eventually went out to Maryland in the third round of the dance. The program’s strong lineage of defending continued last season with Christian Dean and Steve Birnbaum leading the line. Both were drafted in the top three of the MLS SuperDraft in January, meaning the Golden Bears will have to turn elsewhere to stop attacks.

But coach Kevin Grimes always seems to come up with top defenders, and Furman transfer Trevor Haberkorn certainly fits the bill. Haberkorn landed on the TopDrawerSoccer.com Freshman Best XI team last year, and he’s as good of a replacement at the back as Cal could’ve hoped. The trouble is that losing Dean and Birnbaum at the same time is bound to have an effect on the overall quality of defending. As a counter, Cal will lead on the senior duo of midfielder Seth Casiple and forward Stefano Bonomo to add some potency to the attack. With Haberkorn slotting in immediately Cal should avoid some hiccups, but it might not be enough to break into the league’s top two.

The overarching question hanging over Stanford’s 2014 season - how far can Jordan Morris take this team? Last year, Stanford made the postseason for the first time in four years and whipped off a run to the Sweet 16. Coach Jeremy Gunn fashioned Stanford into a pragmatic side that can pick up results, as it did by winning its way into the playoffs with wins in each of its last two, including against No. 5 California.

There’s little question now, though, that this is Morris’ team. The lightning-fast forward scored for the U23 MNT as recently as August, and he enters the season as arguably the nation’s best striker. If Stanford can provide him service from the midfield and do enough to lessen the intense double and triple teams - leading scorer Zach Batteer should help there - Morris will provide the catalyst for another postseason run. Junior Brandon Vincent returns to anchor the back line, but the Cardinal have to replace Aaron Kovar’s production from the middle. The addition of freshman Corey Baird gives Stanford immediate relief for a push into the top half of the league, a very realistic goal.

While the Aztecs only won two conference games last year, there were occasional glimmers of life. In addition to a sweep of Oregon State, SDSU drew Stanford twice and only fell 2-1 in back-to-back games against UCLA and Cal. The team won’t be satisfied with its six conference losses last year, but there were building blocks in place for improvement in 2014.

Whether that continues apace will rest squarely on the shoulders of the back line. The Aztecs have the bedrock of a stable defense with the return of the senior trio of Wil Cannon, Henrik Synnes and Evyn Hewett, which will help them stay competitive in a conference with so much attacking firepower. Casey Phillips played plenty along the back as well, and keeper John Marcuzzo backstops one of the most experienced defenses in the country. There’s still some question where the goals will come from. The Aztecs lose an incredible 90 percent of their goals from last year and each of their top seven scorers. A lot will be asked of the defense, and it could be a tall order to break into the top four.

Oregon State was enjoying a solid 2013 until conference play hit. From the time Pac-12 play started on Oct. 3 until the end of the season on Nov. 17, the Beavers didn’t win a single game. That included an overtime loss to Stanford and two draws against top-5 UCLA, including a 1-1 result in SoCal. Oregon State was competitive in most of its games but has to figure a way to turn a few league losses into draws and a few draws into wins.

The return of impact forward Khiry Shelton should help. The former U.S. YNT player scored four goals last season before being knocked out with an injury, and he’ll be the focal point for the Beavers’ attack in his final season in Corvallis. Oregon State will look for a spark out of midfielder Mikhail Doholis, and Dutch midfield transfer Phillip van Berkom (Longwood) could slot in right away. The defense should be the strength, and Oregon State got a huge boost when North Carolina’s Jalen Markey came west in the offseason. He’ll slot in with veterans Brenden Anderson and Will Seymore, and the thing is held together by keeper Matt Bersano, who set the program record last year with 101 saves. Oregon State should be a tougher out in 2014, but whether the Beavers can climb any higher than fifth is another matter.