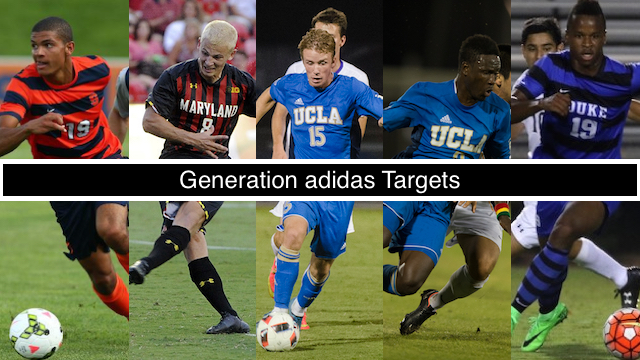 MLS has identified five players as part of the initial group for the 2017 Generation adidas class, multiple sources told TopDrawerSoccer over the Holiday weekend. Jackson Yueill (UCLA), Abu Danladi (UCLA), Miles Robinson (Syracuse), Gordon Wild (Maryland) and Jeremy Ebobisse (U.S. U20 MNT/Duke) are the targets for the league. Tim Kubel (Louisville) could also be in the mix as well, a source informed TopDrawerSoccer.

Ebobisse, 19, is the only one who already signed a deal with the league. The U.S. Youth National Team forward decided to sign with MLS rather than play his junior season with Duke back in August. It was a peculiar decision, but one that likely won’t hurt his draft stock. As one of likely three forwards from this Generation adidas class, many expect Ebobisse to hear his name called early on Jan. 13 at the 2017 MLS SuperDraft.

Jackson Yueill, 19, flirted with the league last offseason, but elected to head back to Westwood for his second season with the Bruins. Yueill and UCLA battled through another tumultuous campaign. The Southern California program was the most talented team, but the results did not consistently reflect the gap in talent between the Bruins and the competition. A loss to Louisville in the Second Round of the NCAA Tournament ended UCLA’s season in 2016. Yueill’s future looks to be at center midfielder with an MLS General Manager comparing his skill set to Toronto FC Designated Player Michael Bradley. The Bruins did utilize him as a defensive midfielder during the NCAA Tournament run. His is an intelligent player who should be among the top three selections in the MLS SuperDraft if he does decide to sign with the league.

Yueill’s teammate Abu Danladi, 21, is also expected to be on the MLS’s wish list for this draft class. Danladi has been a target for the league for the past two offseasons. The former Gatorade Player of the Year could very well be one of the best players to enter the draft in recent years. However, his injury concerns are likely going to scare some MLS teams away. Danladi has yet to play a full season for the Bruins. When he is on the field, he was the best player in college soccer. It was just rare for him to be on the field consistently. There is some belief that Danladi would greatly benefit from leaving the college game and being focused on only his professional team with a devoted medical staff and a consistent approach to his rehab. Danladi has turned down MLS in the past, but this is the last year for him in the Generation adidas pool so it seems likely he will leave Westwood during this offseason.

Miles Robinson, another U.S. U20 Men’s National Team player, is the star center back of Syracuse. Robinson, 19, enjoyed a stellar debut college season last fall with the Orange where he helped led the team to the 2015 College Cup. He has been just as good, if not better, this season for the ACC program. Robinson is an athletic center back who has steadily improved in under the coaching staff with Syracuse. Among this group, he seems the most likely to turn down the advances from MLS. However, Tab Ramos and the U.S. Youth National Team coaching staff has been openly vocal about getting players into professional environments as early as possible.

Gordon Wild, 21, was a star with USC Upstate in 2015 and then transferred to Maryland for the 2016 season. He was superb there too this season. The striker has the best left foot in college soccer. He is one-foot dominant, but it is still difficult to stop. Wild, from Cologne, Germany, looks to be one of the best true finishers to come from the college game in recent years. He has many fans already among MLS scouts and General Managers.

MLS’s Generation adidas program began in 1997 as a mechanism for talented players with collegiate eligibility remaining an early entrance into MLS. Last year’s Generation adidas class included seven players as the classes have shrunk in recent years. While the 2016 class featured only one player eligible for the U.S. National Team, this year’s edition could feature three with experience at the U.S. Youth National Team level.

The Generation adidas class is expected to finalized in the coming weeks as representatives from MLS communicate with the agents for the players and negotiations for contracts take place following the conclusion of the collegiate season. Beyond Ebobisse, the other players on the initial list still have a decision to make as they all could elect to return to college for another season or pursue options overseas.