CARSON, Calif. — It was a day of chasing shadows for the U.S. U20 Women’s National Team at the U.S. Soccer National Training Center. 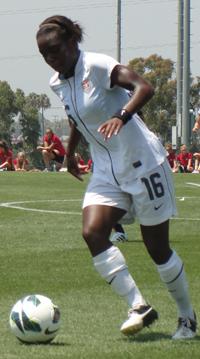 Japan 3-0 handily defeated the U20 WNT in the second international friendly for the week between the two teams. Japan also won the first meeting, 3-2.

“I think our ability to cope defensively with speed of play, and to cope with their movement, was pretty poor,” U20 WNT head coach Michelle French told TopDrawerSoccer.com. “Having not been exposed to this type of team yet during this cycle, it is a huge opportunity to take away before they go off to college. Now, come the couple of camps before qualifying there is something new for us to work on.”

U.S. started the game brightly with an attack in the opening seconds, but a kick save from Japan goalkeeper Ayaka Tamashita neglected a shot on target, which was wiped off the board due to an offside flag.

After that, it was the Kaela Little show. The Notre Dame goalkeeper made four saves in the opening half, and also performed some magical tricks to block a few crosses inside the six-yard box.

Little could only hold on for so long, and Japan made the breakthrough after 15 minutes when striker and captain Ayaka Michigami beat the offside trap and then calmly slotted her shot off the far post and into the net.

The U.S. had little to show from the opening half, as Japan’s two center midfielders dictated the game and eliminated the trio of U.S. midfielders.

The second half offered little reprieve for the U.S. sans a few moments of individual brilliance.

Summer Green showed off some clever dribbling moves inside of the 18-yard box to temporarily free herself from the swarming defense, but her cross was a bit off target and Margaret Purce could not control it. The U.S. tried to redo the attack with Purce passing out to Danielle Weatherholt who slotted it over to Morgan Andrews. Her shot sailed over the bar though.

Japan doubled the lead 18 minutes into the second half on a blunder between the goalkeeper and a defender. Little made a great stop on the intial shot, but a defender snuck her foot in and tried to clear the rebund, which Little was also trying to jump on top of. The half-blocked clearance landed on the foot of Miku Kojima who just kicked it into the open net.

It went from bad to worse seven minutes later when Michigami scored on her second of the game on a beautiful sliding finish off a cross. Little was, once again, left helpless.

The outing almost turned into a nightmare for the U.S. with 10 minutes left on the clock when Little took down Kojima in the box. The referee awarded Japan a penalty kick and showed the goalkeeper a red card. Katelyn Rowland stepped in and made a good save on Marin Hamamoto’s shot from the spot to keep it at 3-0.

U.S. finished the game with six shots, and only three finding the frame. The precision and execution of Japan’s style of play stifled the Americans for large parts of the game, and they were left chasing the ball on a warm Southern California day.