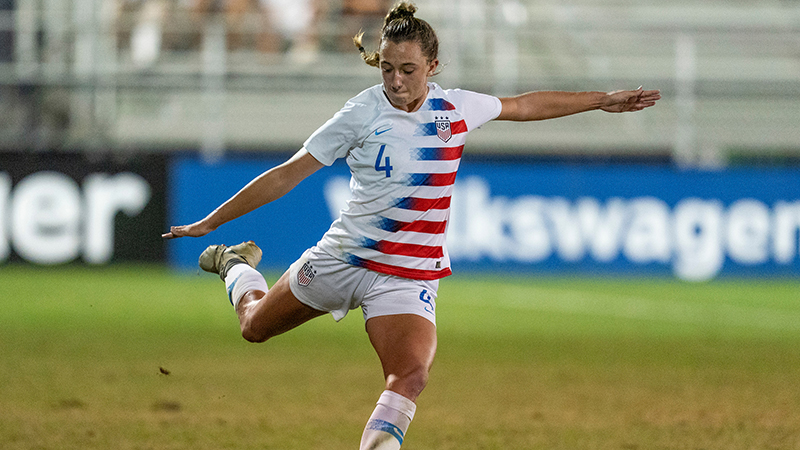 After kicking off the new cycle in October with a training camp for younger players in the pool, newly-appointed U.S. Under-20 Women’s National Team head coach Tracey Kevins has called 24 players to the Elite Athlete Training Center in Chula Vista, Calif. for a year-end camp running from Dec. 7-14. The U-20 USWNT is preparing for next year’s Concacaf U-20 Women’s Championship which is set for Feb. 25-March 12 in the Dominican Republic.

This roster features 23 college players who have just completed or will complete their season this weekend and one professional player in 16-year-old midfielder Olivia Moultrie of Portland Thorns FC. Four players on the roster are competing in this weekend’s NCAA College Cup: Florida State goalkeeper Mia Justus and defender Lauren Flynn as well as Rutgers defender Emily Mason and forward Riley Tiernan.

Players born on or after Jan. 1, 2002, are age-eligible for the Concacaf U-20 Women’s Championship. The 24-player roster features 12 players born in 2002, 11 born in 2003 and Moultrie, who was born in 2005. The Portland Thorns midfielder is the one holdover that participated in the first training camp of the U-20 USWNT cycle last October, which featured all youth club players apart from Moultrie. Fifteen colleges are represented on the roster, led by three players from the University of North Carolina, and the players hail from 13 states, with the most, four each, coming from California and Texas.

Two players on the roster helped the U-20 USWNT win the 2020 Concacaf U-20 Women’s Championship in Mason and midfielder Talia DellaPeruta. The U-20s took home the title with a dominant performance in the Dominican Republic, rattling off seven straight victories and a 44-1 goal differential. After clinching its record sixth confederation title that March, the 2020 FIFA Under-20 Women’s World Cup was canceled due to the COVID-19 pandemic.

This year’s Concacaf U-20 Women’s Championship will qualify three teams to the 2022 FIFA U-20 Women’s World Cup in Costa Rica. As host, Costa Rica received an automatic bid to the world championship tournament.

Several other players on the training camp roster bring youth World Cup qualifying and youth World Cup experience. In addition to the squad’s 2020 CWU20 champions, DellaPeruta and forward Makenna Morris lifted the 2018 Concacaf U-17 Women’s Championship trophy and the two were joined by forward Trinity Byars and defender Samar Guidry on the U.S. squad for the 2018 FIFA U-17 WWC in Uruguay.

With the end of the college season, many players on the roster have earned postseason award recognition. Duke freshman forward Michelle Cooper was named a semifinalist for the MAC Hermann Trophy, the lone underclassman on the list, and took home ACC Freshman of the Year honors. Washington State freshman goalkeeper Nadia Cooper was named Pac-12 Goalkeeper of the Year and Freshman of the Year after leading the Cougars to their best-ever conference record with the fewest goals allowed in Pac-12 play this season.

Texas midfielder Alexis Missimo won Big 12 Freshman of the Year and Rutgers forward Tiernan was honored as Big Ten Freshman of the Year after leading their respective conferences in assists. Last weekend, Tiernan scored and added an assist to send Rutgers to the College Cup for the first time since 2015. In total, six players were named all-conference and 13 were recognized on their conferences’ all-freshman teams.