Travis Ives wanted to be closer to home. So after red-shirting as a freshman for West Virginia last season, the goalkeeper from Bridgewater, New Jersey, will be joining Monmouth in 2011.

In addition to location, Ives’ move comes at a convenient time as Monmouth’s previous starting goalkeeper Bryan Meredith was drafted by the Seattle Sounders of the MLS, opening up playing time for others.

Ives is a 6-foot-4 specimen who was one of our Top 100 players in his class as a club player and is excited about the new opportunity in front of him. 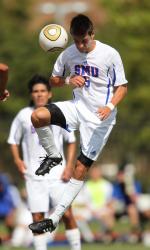 AJ Corrado
“From the instant I spoke with (Monmouth coach) Robert McCourt I felt very comfortable,” Ives said. “I’m also confident their goalkeeping training is one of the best in the country. Meredith was able to have an excellent four years and be drafted into the MLS, which is the goal of every goalkeeper.”

Let’s take a look at some of the other names changing colors this season:

AJ Corrado is transferring from SMU to Indiana.

Corrado is a very talented young midfielder who can make the game easy. He logged some minutes as a freshman last season and might be ready to step into a larger role. Corrado, who went to Europe this past summer as part of the SuperElite® All-American Showcase, will be returning home where he starred as a club player for Indiana United.

“I’m glad to be back with a lot of my old friends and teammates and close enough for my parents to come watch,” Corrado said. “Also, my brother attends Indiana as well."

Matt Hedges is transferring from Butler to North Carolina. This is a big loss for the Bulldogs as Hedges was the starting center back who was second on the team with five goals in 2010. He’ll be a senior this season.

Julian Cardona is transferring from Butler to Penn State. The Bulldogs lose a second starter in Cardona, who had four goals a year ago and will be a junior this season. Whenever there’s a change at head coach, as Butler has experienced, you risk losing valuable personnel.

Chase Wickham, is transferring from Trinity Western to UA(m). Wickham is a striker who spent one season at Trinity and will join UAB as a sophomore.

Tomislav Zadro is transferring from Illinois Central College to Wisconsin. Zadro is a left-footed midfielder who will be a junior.

Jerry Maddi is transferring from Eastern Illinois University to Wisconsin. Maddi is also an attacking player who will be a junior.

Alex Bolowich is transferring from FIU(m) to Creighton. Bolowich, a goalkeeper, will be united with his father Elmar, the new head coach of Creighton.
Headlines
College Rankings HQ
View all rankings >>