Kia McNeill Has Built a Dynasty at Brown 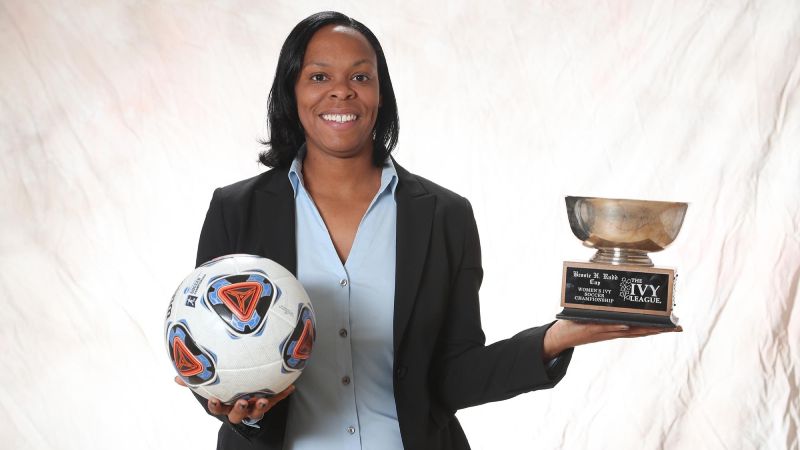 It was a pretty standard fitness test for Brown women’s soccer. The team was to run a handful of 300 yard sprints designed to build endurance. So, they sprinted, some faster than others, but all pushing themselves to the finish line.

When they were done, gasping for air, head coach Kia McNeill had one thought: ‘not good enough.’

“I was disappointed because the numbers just really weren't where I felt that they needed to be,” McNeill said.

The coach laid into her team, expressing her frustration. After practice, an upperclassman approached her. They wanted it enough, they were trying, she said. But to get to the level McNeill demanded, they would need help.

“It made me have this like aha moment,” McNeill said. “They want it. But they just don't know how.”

That conversation was a pivotal moment in the rise of Brown women’s soccer, McNeill said. It brought the team together and allowed McNeill to get her ideas across. It’s those moments that have built up over time, taking the Bears from an untapped program to back-to-back Ivy League champions — with a third on the trot in sight.

McNeill took over the Brown job with the team in flux. It had always been competitive, but had never quite reached the summit of the Ivy League. There was potential — top recruits, all-conference talents — but not the crucial mentality required to toil through a long college season.

Under the now seventh-year head coach, that’s changed. As the team heads into the 2022 fall season, it has the chance to win its third Ivy League championship in a row. And for the Bears, it’s McNeill’s guidance and intensity that have helped them reach the top.

When McNeill walked into Providence, she steadily fixed problems within the program. The team lacked fitness, so the early sessions were heavy on running, and her squad spent hours in the gym. The team had a shallow tactical understanding, so the video sessions were meticulous.

Most jarringly, though, McNeill found her team lacked belief. The Bears hadn’t won an Ivy League title since 1994. A handful of third place finishes had placed Brown among the conference’s best, but far off from the elite.

“In order to win, you have to believe that you can win,” McNeill said. “In the same way that losing is a habit, I think winning becomes a habit.”

“It's not about winning, it's about the steps that it takes to get to winning”

It took three years for the results to show on a consistent basis. McNeill picked up a trio of excellent recruiting classes. First, she brought in Sydney Cummings, the first Bear to be selected in the NWSL Draft. Consistent starters Abby Carchio and Cameron Brown also joined the program, as did prolific goalscorer Brittany Raphino.

The coach had her high pressing ways and top squad, but she also drew remarkable consistency from her side in Brown’s first championship season. 10 out of the 11 starters played most of the campaign. And when a presumptive starter missed a game or two — such as when senior captain Celia Story was sidelined for three weeks — McNeill plugged the hole easily, turning to Abby Carchio for leadership and Sara Bermudez for defensive solidity.

That was evident on November 2, 2019. The Bears were playing a Saturday night game against Penn, looking for a win to clinch the Ivy League regular season title. And for 119 minutes, Brown peppered the Penn goal. They notched 27 shots, but none hit the back of the net. A draw seemed like a real possibility.

Then, with 30 seconds remaining, the referee awarded Brown a penalty as a drilled shot skidded off the hand of a Penn defender. Carchio stepped up and slotted it into the bottom corner, sealing the title with 30 seconds in extra time to play — and sending the Bears into raptures.

For the team on the pitch, it meant delirium, a return to the winning ways that had evaded the squad since 1994. McNeill, though, saw it differently. The title was something to be celebrated, to enjoy. But it was also a weight lifted, a chance to truly build something that stretched beyond the confines of a 20-game season.

“We only conceded three goals that year,” McNeil said. “We had an incredible season, offensively and defensively.”

“Everybody thought that was a one-off”

In spring 2020, dreams of a title repeat were cast away. The onset of the Covid-19 pandemic ground Brown’s title aspirations to a halt.

So McNeill adjusted. The coaching staff developed “PACT” plans, an acronym that served as a mantra for lockdown. They found that the team could develop in four key areas: physical, attitude, character and tactics. They ran two-week cycles, with programs specifically set up for each squad member.

There was the physical aspect: home workouts, jogging, fitness. Then there was the tactical element: analyzing old film, tuning into NWSL games, keeping the soccer brain sharp while forced indoors. They brought in guest speakers, too, as USWNT stars Crystal Dunn and Heather O’Reilly dialed into meetings.

For attitude and character, every player was assigned an “accountability partner.” They were told to call their partner on a biweekly basis, explain their goals for the week and demand that the other party hold them responsible.

“It gave us a leg up once we were able to come back together physically,” McNeill said.

When the team did come back together, though, things didn’t go to plan. On August 21, 2021, Brown opened its season with an away fixture at Hofstra. Within nine minutes, Hofstra had scored. After 15, it was 2-0. Even a more resolute second half defensive performance couldn’t stop the bleeding. The Bears lost 4-0, mustered three shots, and conceded more goals in one game than they had in the entire 2019 Ivy League season.

In the locker room after the match, the players were frightened, Maxwell said. They expected a rebuke for what was the worst defensive performance they’d put in since 2018. And McNeill was angry. But she didn’t scream at her squad, she didn’t run them into the ground at practice. Instead, she saw it as an opportunity to learn, brush the notion of a title defense away, and get back to drawing the best out of the group.

“That was the best loss I've ever had,” McNeill said. “We were trying to compare ourselves to 2019 … But you always have to reinvent yourself as a team.”

McNeill still had a very good defense, but it was no longer one of the best in the country. The solution, then, was to make Brown more expansive going forward. It became a far more attacking team, averaging over two goals per game while leaning on the excellent forward play of Raphino and Ava Seelenfruend. One of the two scored in every single Ivy League game, as Brown steadily navigated the conference. Dartmouth was dispatched, 4-1, to open the slate. Steady wins against Columbia, Princeton, no. 16 Harvard and Cornell followed.

Once again, the Bears had to get past Penn to win the title. It was a similarly dreary Saturday evening to that of two years before. But this time, extra time wasn’t necessary. In the 8th minute, Raphino found a darting Seelenfreud with a diagonal ball in behind the back line, which the striker dutifully tucked away. The well-worked goal proved to be enough, and a 1-0 win secured a second consecutive Ivy League championship.

A week later, the team achieved another feat, coming back from a 1-0 deficit to dispatch Yale 3-2, and complete the program's first undefeated Ivy League campaign in 30 years. And though celebrations were admittedly subdued — it wasn’t their best performance, Maxwell said — history had been made.

“Everyone was just really excited and happy for each other and we felt like our hard work had paid off,” Maxwell said.

McNeil’s squad has proved it can win in different ways. Ahead of 2022, the pieces are largely familiar, and the power balance of the conference doesn’t appear to have shifted over the last few months. Meanwhile, reinforcements are en route to the Bears, to the tune of top club prospects, as well as transfers with postseason experience.

A three-peat is possible. NCAA Tournament success is perhaps necessary, too (No McNeil-led Brown squad has made it past the second round.) Until August 1, though, reinvention is a priority, one sprint, one video session, and one tactical crash course at a time.

“You can't rest on past laurels,” McNeil said. “We definitely have some dangerous weapons on our team to be successful again, but it's just about putting it all together.”