Like many other major programs across the nation, Notre Dame had to cope through the first few weeks of the season without a couple of talented players because of the U20 Women’s World Cup.

While Mandy Laddish and Cari Roccaro were busy winning the competition over in Japan, the Irish labored at times, posting a 3-3-1 record against some pretty good teams.

But after the pair returned to action on September 9 against Louisville, the team has won eight of its last 10 games – just one of those a loss, a 2-0 defeat at the hands of #5 Georgetown. 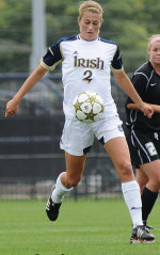 “I’m pleased with where we’re are, and I think we’ve got a great opportunity to be good for a long time,” head coach Randy Waldrum told TopDrawerSoccer.com.

The early struggles were also against some very difficult opponents, including a 1-0 setback against North Carolina and a 3-0 road defeat in the Pacific Northwest against Washington.

The return of Roccaro and Laddish were important because they strengthened the spine and reduced the number of cheap giveaways that led to opposing attacks.

“I think those two players made a big difference,” Waldrum said. Where we struggled early we gave the ball away a lot. Our midfield wasn’t solidified, and it caused us problems defensively, and since they’ve come back we’ve minimized the goals against pretty drastically, and it’s because we’ve been able to keep it in midfield more.”

Holding onto the ball more, while also ensuring that the team reduces the number of goals against, has aided the Irish’s quest to find the back of the opponent’s net. During a stretch run of eight games unbeaten, Notre Dame outscored teams 26-5, and scored in every game until the defeat at the hands of the Hoyas.

In the loss to Georgetown, it was actually a cheap midfield giveaway from Roccaro that led to the Hoyas’ first goal, as she tried to play a square ball fifty yards across the field that was intercepted and turned into a goal. It’s mistakes like that Waldrum knows the team needs to avoid in order to put together a significant run in the postseason.

Part of Waldrum’s challenge with his group this season – aside from the early absence of Laddish and Roccaro – is how young of a team he has, with a class of 12 freshmen entering the program this fall. It makes education just as important as the season winds along, teaching players how to cope and avoid those errors.

“It’s a lot of work on the field, and then it’s a lot of work in the video study,” Waldrum said. “Too many of the young players today are playing on club teams that it’s all about winning and not so much about player development. I think these young players, they’re playing on their top club teams when we get them, and when they make those mistakes they don’t get punished. They get to the collegiate level and they do.

“A lot of them don’t recognize that a turnover in our attacking end, five seconds later can end up in the back of the net in our defensive end. They never think of it that way.”

That requires a cautious approach, but Waldrum is prepared to trust his players in an aim to make noise in the Big East and NCAA Tournament.

“It’s just like a parent trying to nurture their child to walk a little bit – sometimes you have to let them fall down a few times before they realize and that’s just the way it is here,” Waldrum said. “We have to let them grow into it a little bit. It’s an on going thing. It’s not going to stop no matter how deep we go, we’ll still be learning.”

The Irish wrap up the regular season on October 19 against DePaul before beginning the conference and NCAA tournament grind.