The B+ (Be Positive) foundation was created after the untimely demise of a courageous 14 year old soccer player, Andrew McDonough from leukemia.  He was renowned for his positive attitude which coincidentally matched his blood type – B+.  The foundation has 3 primary objectives: provide financial support to families with critically ill children; fund medical research for pediatric cancers; and proliferate the B+ message.  If you’d like to find out more information on this organization, here’s a link. 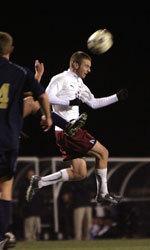 Lafayette's Blake Fink
Not surprisingly given my propensity for generating rain this spring, I’ve been in negotiation with the Saharan Precipitation International Commission for Youths (SPICY) to cover a multi-year Sahara Desert soccer tournament.  While most of my demands have been conceded including payment of millions of dollars, peace in all warring nations of Northern Africa (see – I’ll fix the Libya problem!) and an assistant to hold my umbrella.  The only stumbling block that hasn’t been met is changing the country name of Chad to Joe – I figured that would be an easier demand – who even knows where Chad is!

Each team played two games and the games were scheduled to start at the same time with 30 minute halves.  Because I hadn’t seen Lafayette play last year and I wanted to see teams that are further from my home, I watched Lafayette play Temple and Lafayette play Villanova.

Because of the inclement weather, the second half of the Lafayette/Villanova match was canceled.

Lafayette had to settle for 2 draws after leading Temple 2-0 and Villanova 1-0.  Lafayette handed the draw to Temple by making wide-scale substitutions in the second half in an otherwise meaningless spring match.  Lafayette was better when both teams played their first teams.

Lafayette was better than Villanova, but a stupendous strike by Villanova evened the score.

Blake Fink scored a goal in each game.  Against Temple, he found space on the back post and got high in the air to powerfully head in the first goal of the game from 8 yards.  Alec Golini provided an accurate deep cross to find Fink’s head.  Temple didn’t organize their defense to prevent that goal and the way that they argued and wanted to assign blame to each other doesn’t bode well that they’ve solved the root cause.

Against Villanova, Fink again found space on the far post.  However, with this goal, he brought the ball down with an educated first touch to beat the defender closing on him. Fink crushed the ball with his left foot with his second touch that hit the side post and into the goal.

Fink is Lafayette’s best player.  He has a terrific work rate and fitness level. Athletically, he gets higher than you expect.  Fink is good with his feet.  I like the honesty of pressuring up-top on Temple’s left back Rodrigo Zuleta to force a turn-over.  Fink was worth standing in the deluge while Noah and the ark floated by.

There are 2 other key Lafayette players – central midfielders Kyle Scharfenberg and Sean Peckham – that solidify the center of the field.  But, Scharfenberg will pop outside to attack up the flanks.  Scharfenberg scored the second goal against Temple – poking a ball into the goal from a scrum of players in the box.  Peckham is a stay-at-home center midfielder.  Peckham served an accurate ball to Fink that he scored against Villanova.

After these 3 players, there are a few solid players that will need to be consistent if Lafayette is going to be successful.  Right back Jake Johnson has a low center of gravity, accelerating out of his turns.  Against Villanova, he used his quick feet to explode away from Villanova left back, Kevin Garcia.  Against Temple, Johnson should have had an assist after setting a gift for Wayne Maminski – which Maminski touched wide.

Brandon Turner has a huge body with sensational timing in the air.  I don’t have as much confidence with the ball at Turner’s feet.

Golini is a competent dribbler willing to force the ball into the box.  I’d like to see him beat one defender and release the ball to get the defense moving and make the ball do the work.

The depth of Lafayette’s team is thin, but I am impressed with the first team’s talent.

Come back Thursday and Friday for reviews on Temple and Villanova.