Lenard prepped for jump from DII to DI 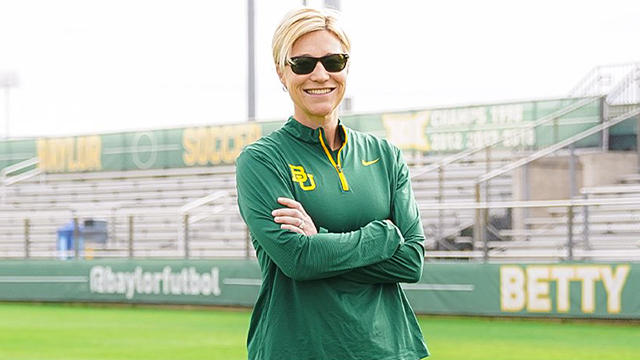 It was the size of everything that surprised Michelle Lenard at first.

The newly minted Baylor women’s soccer coach wasn’t used to the sheer magnitude of things. The bigger stadium. The more expansive campus. The number of eyes watching her every move as coach.

It was a change she expected, though, having made a leap from Division II Dallas Baptist to Power 5 Baylor. In doing so, Lenard became one of a select few coaches to jump straight from the DII shadows to the Power 5 spotlight.

But that change, one from relative anonymity to nationwide attention, hasn’t been a source of intimidation. Rather, for the Texas native, the intra division leap has been an opportunity, one she has embraced. And one in which she hopes to turn a middling program into a national title contender.

“I just want to be in the right environment where I can serve my players, and compete at the highest level possible,” Lenard said. “And I feel like I can do that at Baylor.”

Lenard wasn’t actively hunting for coaching jobs when the Baylor opportunity arose. But the lure of Waco — a saunter up I-35 from home — was too good to pass up. The move was far from a simple one. Lenard has switched the simple digs of Dallas Baptist for the high-end facilities at Baylor. With that move comes attention, but also boundless opportunity to apply her coaching style at a program with four Big 12 titles to its name.

Lenard’s time at Dallas Baptist was marked by success and sustained growth. She inherited a Patriots squad that had endured three straight losing seasons and turned them into a consistent contender in the Division II circuit. She took Dallas Baptist to the NCAA Tournament in each of her last seven years at the program, culminating with a final four appearance in 2021.

“We had a strong group,” Lenard said. “We felt like we could go out compete with any major in the country.”

And that experience, one of overseeing the elite of Division II, was exactly what Lenard needed to prepare her for a top job in a higher division. She believes the same principles that worked at Dallas Baptist will help her rejuvenate Baylor: quick transitions, pressing high, limiting opponents’ time on the ball.

That means reinventing a squad that endured mixed fortunes in the Big 12. Though the Bears didn’t exactly labor through games, they were shutout six times — capped off by a three game goalless streak to end the season. Hitting teams high, and controlling space, is a vital part in making those shut outs less common.

“It's very physically demanding game. And if you want to press you have to be fit. But what I tell my players is you can run now and press, or we can run more later and chase,” Lenard said.

We got a good one 👀@MichelleLenard1 and her staff at DBU were named @UnitedCoaches National Staff of the Year!

Though her team was admittedly thin due to injuries and stasis between incoming players, Lenard still had time to coach. And her philosophy met willful ears in the squad she inherited this spring.

Still, there were rough patches. While the spring season saw moments of success, tired legs kicked in as Lenard’s squad adjusted to a new system.

“It took them a while, but after like the second game, they were like, ‘okay, we see your point’,” Lenard said.

So, the coach’s time at Dallas Baptist shaped a style that she hopes will transfer to the big stage. And while she still needs to add pieces, the early signs are good.

There will undoubtedly be further adjustments, too. Drawing top recruits from top clubs will be a priority, as will finding the right additions from the transfer portal. And walking out into a ground that can sit up to 2,000 — complete with a new pitch and top soccer facility — is far different from taking in a ground that fits 500.

But those shifts, those new things, are something that she’s embraced.

“It's a jump. It's a change. For me, it was never really about making a move just to climb the ladder,” Lenard said. “It was about finding the right fit.”

And in Baylor, she might just have found the best one.