Reading had a difficult struggle even before the game began missing 3 key University of Virginia players to European try-outs/”training”.  Brian Span is training with Orebro SK in Sweden.  Likewise, Brian Ownby and Will Bates are training with Swedish side MJällby AIF.  Both of these teams currently employ players developed at United States colleges. US National Alejandro Bedoya attended FDU and Boston College before signing with Orebro SK in January 2009.  On the MJällby AIF roster is Clemson and Seton Hall alumnus Sam Petrone.

With Brian Ownby’s frequent injury problems, I wouldn’t be terribly surprised if he entertained a professional contract rather than returning to UVA in the fall.  As a rising senior, his MLS leverage is reduced since he is ineligible for a MLS Generation Adidas contract.  He’s a potential first round MLS draft pick.

Will Bates will be a junior in the fall and he may be a better fit (than Ownby) for MJällby AIF who is looking to find a new forward.  With his big body and quick feet, he is a more prototypical target forward.

Rising sophomore Brian Span has a higher upside with his speed and agility, but he is a bigger project because of his raw tactical skill.  Span would be best served returning for another year of training at UVA with Coach George Gelnovatch.

Long Island’s game plan was primarily to pack in players on defense and to secondly aggressively defend with the first defender - closing down options and force turnovers.

In the 30th minute, Keith Detelj opened the scoring on crushing 15 yard header off an early cross by Danny Kramer.  Detelj hit the ball hard, but Reading goalkeeper Brian Holt didn’t react and he couldn’t get to the high ball. 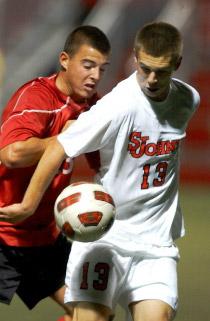 Dom Sarle
Dom Sarle (UC Santa Barbara) scored on a penalty kick in the 79th minute effectively ending the game.  The penalty kick was earned by Kramer dribbling into the box and being tripped.  It didn’t seem like a lot of contact.

While Long Island won the game, I have to question the tactics of playing two outstanding central midfielders in wide positions.  Against Ocean City, Tyler Arnone (Michigan) and Ben Arikian controlled the midfield, playing smartly on both sides of the ball.  Playing wide in this game, they had far less impact in this game.

DM Gary Flood (Hofstra) was a steadying influence in the midfield.  He reads the game well, filling passing lanes and clearing the ball effectively.  Flood doesn’t solely rely on long clearances, but he makes small touches to his teammates to maintain possession.  Flood is a better DM than Arnone or Arikian, but doesn’t have the attacking prowess.  From this perspective, I don’t have an issue with Flood starting at DM.

Conversely, I’d prefer Arnone or Arikian centrally rather than Adriano Gabriele (Seton Hall) there.  Gabriele dribbled the ball out of bounds in the 8th minute.  He mistimed his tackle in the 27th minute opening up the midfield for Reading’s Stephen Okai (Mobile NAIA).

While Keith Detelj scored a nice goal for the first, he needs to capitalize better on his numerous chances. In the 44th minute, Sarle touched the ball to Arnone who put the ball through to an open Detelj, but Detelj’s shot was wide. Detelj has tremendous leaping ability.  Sarle and Detelj need to be more cognizant of their spacing, because they both have a tendency to fill the same space.

In an odd call in the 31st minute, Detelj was way off and the AR signaled it, but the center referee waved it off.  I don’t understand why when Detelj used the non-call to his advantage.  It was just odd.

Each time that I see Arnone play, I come away more impressed.  In this game, he wasn’t creating as much, but he was doing other things that help his team win.  In the 28th minute with Kramer overlapping, Arnone cycled back sealing off Chris Wheeler (Mount Saint Mary’s) from getting to a ball leading to a Long Island goal kick.  In the 36th minute, he stole the ball from Christian Barreiro (Penn).   Arnone is a good passer.

In the 76th minute, Jimmy Nealis (Georgetown) made a beautiful run, beating David Rodriguez with a slick touch and speed. Nealis rumbled down the line before crossing to Sarle. Sarle’s shot was blocked by teammate Ben Arikian.  Nealis didn’t get forward many more times during this game.

Sarle was involved in much of the positive play, but he’s less effective passing on the run.

Kevin Garcia (Villanova) was competent in the back as a defender and with the ball at his feet.

Thomas Wharf was equally satisfactory, but he had a galling turnover in the back in the 3rd minute in his own third.

Reading was very direct.  They continuously tried taking the ball over the top with limited success.

Chris Wheeler (Mount Saint Mary’s) was best when he made small touches to his overlapping midfielders.  He flicked the ball on for Matt Baker cutting back smartly before squaring the ball Christian Barreiro (Penn) whose rocket was tipped over the crossbar by goalkeeper Alexander Naples (Saint John’s(m)). In the 10th minute, Wheeler got the ball through to Shane Malcolm (High Point).  Malcolm dribbled the keeper, but his shot hit the post and rebounded to Lasse Sohrweide (Anderson D2).  Sohrweide eluded his first defender but appeared to be tripped no call.  This was the right decision.  Wheeler was less successful trying circus heel passes. 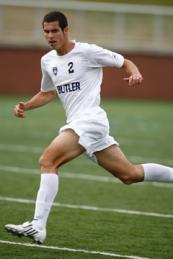 Matt Hedges
Both Barreiro and Stephen Okai (Mobile NAIA) check back to get the ball from the backs.  At times, this is unconsciously pulling defenders with them into the spaces.  Barreiro was passing too softly.  In the 80th minute, he struck a nice free kick that Naples punched it out.

Malcolm had a few poor touches early, but calmed down and played well throughout the first half.

The best player for Reading was Matt Hedges (North Carolina).  He’s such a smart player that he understands what’s going to happen and adjusts to it.  He’s good in the air.  He has enough speed to get to the sideline.  Hedges has good ball skills. His transfer from Butler will be a big boost to the Tar Heels this fall.

Ged Quinn was shaky in the back, both defending and working the ball out of the back. He panics when pressured.

Tyler Witmer (Temple) has a slow first step.  In the 50th minute, Matt Sanner (Princeton) served the ball behind the defense to Witmer.  Witmer couldn’t get any separation from Kevin Garcia, but Witmer was able to fire a low hard shot that Naples was able to block.
Headlines
College Rankings HQ
View all rankings >>