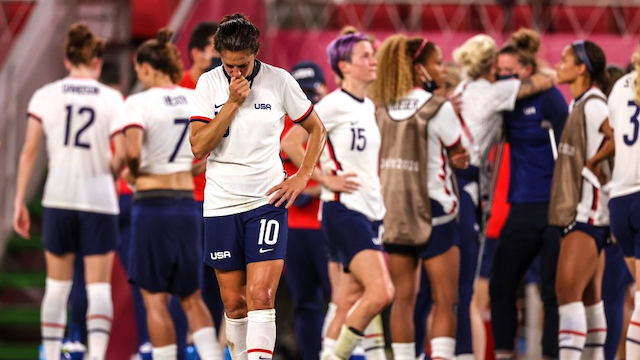 The U.S. Women’s National Team suffered a heartbreaking defeat in the 2020 Olympics semifinal round on Monday morning to Canada. A second half penalty kick from former UCLA great Jessie Fleming sealed the 1-0 victory for Canada and sent USA to the Bronze Medal game against Australia on Thursday. Canada will take on Sweden in the Gold Medal game.

While it was not a stellar performance from USA, they still did enough to get the result on the day. USA had the advantage in most categories in the game with 17-5 lead in shots and 6-2 in shots on goal. Canada goalkeeper Stephanie Labbé made a pair of good saves midway through the second half including one on a header from Julie Ertz.

The penalty kick was completely against the run of play, and did not look like much on first view. The video assistant signaled for the referee to take a closer look at the play, which was controversial decision after viewing multiple times at slow motion.

It was enough for Canada though. Fleming buried the chance from the spot, and the underdogs held on for the historic victory despite the mounting late pressure. The loss was a big surprise. USA had not lost to Canada in 20 years in women’s soccer.

This tournament has been an eye-opening experience for USA fans who were riding high off previous successes. USA suffered a 3-0 loss to Sweden in the group play. The first loss for head coach Vlatko Andonovski, who is now 23-2-3 in 28 games in charge of the team.

With one game still to go at the Olympic Games, it’s not the end of the road for this group and they will certainly want to take a medal home, but it’s hard not to look forward when talking about the program. The USA squad achieved everything on the global stage, but it does feel like this is the end for this group.

The World Cup is scheduled for the summer of 2023, two years away. The Olympics provided plenty for the USA to make adjustments prior to that major event.

The biggest adjustment will have to be roster turnover. Andonovski selected an experienced group for the Olympics. Carli Lloyd is 39. Becky Sauerbrunn and Rapinoe are 36. Kelley O’Hara turns 33 on Wednesday. Christen Press and Alex Morgan are 32. While some of those giants of the sport will still be among the best in 2023, they cannot remain the stars of the team forever.

USA lacked an attack during the Games. They were shutout in three of their five games including the semifinal. A barrage of six goals in the win over New Zealand will slightly skew the stats in a favorable light in retrospect, but it is not enough to overlook the struggles from the other games.

The good news for US Soccer and Andonovski is that the domestic league is strong and there are young players (including attacking talent with some pace) developing on the teams in the NWSL. Trinity Rodman, Mallory Pugh, Brianna Pinto, and many others are pushing for their chance with the full national team.

The current group inspired a new generation of athletes. It’s on that next wave to continue the success of the program.