Louisville moving toward a successful season When examining the players Louisville lost after the 2011 season, it wouldn’t have been surprising to see a big drop-off this fall.

And while the Cardinals have certainly taken lumps during the first half of the season – with losses to Maryland, Saint Louis and Kentucky so far – they are staring at the second half of the season feeling like things are trending upward. 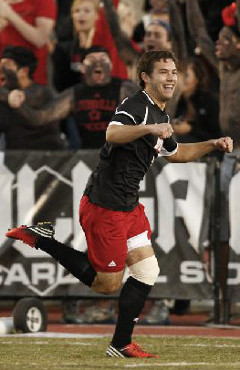 “We’re very encouraged,” head coach Ken Lolla told TopDrawerSoccer.com. “We had a number of guys that had played significant roles through the last three years for us and had those guys move on. With this group, that meant there were a lot of spots we had to fill. And I think the first part of the season was discerning not only who, but what spots guys would play and what roles they would play.”

On paper, the team’s record is modest at 5-3-0. However, with four wins in their last five games, including a 2-1 defeat of previously undefeated Notre Dame on September 23, there are reasons to believe that Lolla’s bunch can compete for Big East honors this fall.

Losing attacking players of the caliber of Nick DeLeon and Colin Rolfe to MLS, along with defender Austin Berry – now a standout with the Chicago Fire – an adjustment period was always inevitable.

The biggest challenge during the opening stretch of the season wasn’t necessarily replacing each of those individuals, but instead, forging an identity in time to bring the group together. And those early losses and high ranked opponents on the schedule have aided that aspect of the development.

“The wonderful part of [finding our identity] is that we’ve had a very tough schedule early, and from a character standpoint it will reveal that, because it creates a lot of tough, challenging situations,” Lolla said. “I think the schedule, playing the likes of Maryland, Wake Forest, and Notre Dame, even Kentucky, which is a rival, all those create really good situations that provide us not only a lot of group but developing our character.”

Of course, productivity on the field also has to be replaced in some capacity, and a handful of players have stepped up to help lead that. Midfielder Dylan Mares, who missed all of last season with an ACL injury, has returned to the creative and dynamic talent he was before getting hurt. Andrew Farrell has been menacing in center defense, Greg Cochrane has moved into a left wing role, and Brock Granger is very reliable in his right back role.

Up front, along with Mares ability to create, the team has embraced a collective approach to scoring without the likes of DeLeon and Rolfe to rely on. Nine players have accounted for the team’s 15 tallies so far.

“The goals are coming from a lot of different places, and because of that I think it’s actually a little more difficult for teams to play against us than it has been in the past,” Lolla said.

Last weekend’s win against Notre Dame was another positive step, no doubt, but Louisville know that plenty of hard work remains as they navigate through the Big East schedule.

As they continue to build something, Lolla hopes that the difficult games challenge them as they work to refine an ever-evolving team.

“For us right now, for our growth, playing difficult teams that are good teams, that are NCAA tournament teams, is very, very important for us,” he said. “Playing that one [against Notre Dame] and getting a result not only helps with our growth but our confidence as well. When you couple that with a Big East game, where every one of those matter for points, it helps that much more.”