Late in the 1st half, Delaware scored 2 goals to even the score at that time.  Regardless, they were beaten about the field.  For much of the first half, Delaware was static on defense and they were pinned back in their own half. 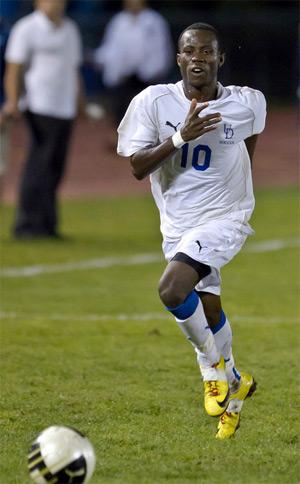 Evans Frimpong
The first goal was scored by Drew Colletti in the 39th minute.  The play started with Evans Frimpong accepting the ball, getting wide and crossing it into the box.  Loyola goalkeeper Thurman Van Riper punched the cross out.  Colletti was open at the top of the box, took 2 touches and fired a nice shot.  Loyola center back Gerwyn Jones didn’t close quickly enough to stop the shot.

In the 42nd minute, the second goal was scored via an own goal.  A 40 yard free-kick by Vincent Mediate skipped off the head of Loyola center back Zach Tweddell.

Frimpong is Delaware’s best technical player.  He only played in the first half and when neutralized made the Delaware attack impotent.  He has quick feet. Frimpong made a slick tackle in the 15th minute.

Vincent Mediate holds the ball well.  In the 39th minute, Mediate fired a shot that the goalkeeper barely was able to tip over the crossbar. In the second half, he calmly placed a hooking shot that was barely wide.

Mark Garrity and Kraig Ellis had continuous problems working and communicating with each other.  Ellis made a horrific square pass in his own third in the first half. On the play, John Dineen didn’t provide a proper option instead instructed Ellis to kick it back to the goalkeeper (which Ellis didn’t do).

Dineen times his tackles well and he doesn’t hesitate to stick the attacker when given the chance.

Michael Stone made several game saving tackles in the second half.

It took Tagarira Marange almost the entire second half to realize that he could blow by Aaron Rilling with his superior speed.

I was looking forward to seeing Mike White, but he was virtually invisible the entire second half until the 85th minute which is why I can understand why he took a quick ill-advised shot.

Ben Raymond was able to find space to receive the ball.

Loyola-Maryland started fast with exceptional tight passes and extraordinary combinations.  It didn’t last.  Loyola dressed only 12 field players including 3 walk-ons.   Fitness is a concern.  If these players have any professional aspirations, this is the opportunity to demonstrate that they are ready to play 90 minutes at a high level with consistency and fitness.  These players have work to do.

The spring fitness issues may be an indication that the team lacks senior leadership.  Given that the spring team is made up of freshman and sophomores, it isn’t surprising of this leadership gap. 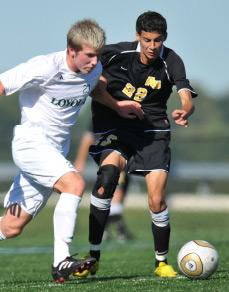 Stephen Dooley
In the 3rd minute, Gerwyn Jones opened the scoring getting behind the Delaware defense and heading from 12 yards from a Kevin Curran 45 yard free-kick.  On the play, Delaware goalkeeper Brandon Paul came out, but didn’t get to the ball before Jones.

The second goal was scored by Cesar Ramos in the 15th minute.  The play started with Stephen Dooley getting the ball to Alex Bullington running up the far wing.  Bullington squared the ball to an open Ramos on the near post and Ramos buried the 15 yard shot.

With Delaware evening the score 2-2 with 2 goals in 3 minutes and half-time quickly approaching, Dooley scored game winning goal in the 43rd minute. Aaron Rilling was able to slip the ball through to Dooley who finally timed his run to get behind the defense and slotted the ball past the helpless Delaware goalkeeper.

29 seconds after half-time, Diego McQuestion scored the fourth goal.  On the play, Dooley put the ball through to McQuestion 1v1 with the goalkeeper slipped it past him.  The goal was scored, because Delaware didn’t pressure Dooley allowing him free entry for the pass.

Dooley is a sensational player with skill and speed.  He was killing Loyola-Maryland being offside 6 times in the first half.

McQuestion was extremely active early, but slowed down and by the end of the game had nothing in his tank.  If he can get his fitness to the entire game, he has a chance.  Otherwise, he needs to pace himself to exert his energy at appropriate times.

Hector Arellano is good in the air, but doesn’t have the quickness to cover the sidelines and isn’t quick enough to close on attackers.

Ramos doesn’t know how to run off the ball.  He feeds the ball into the corner for Dooley or McQuestion and doesn’t run into the middle as a target.  Instead, Ramos calmly jogs down the side line.

Of the 3 walk-on players, Aaron Rilling started and played the entire game at right back.  As a walk-on, he was fairly competent.  He needs to get wider to give himself more time when he receives the ball.  Rilling needs to pass the ball, not just kick it up the field.
Headlines
College Rankings HQ
View all rankings >>