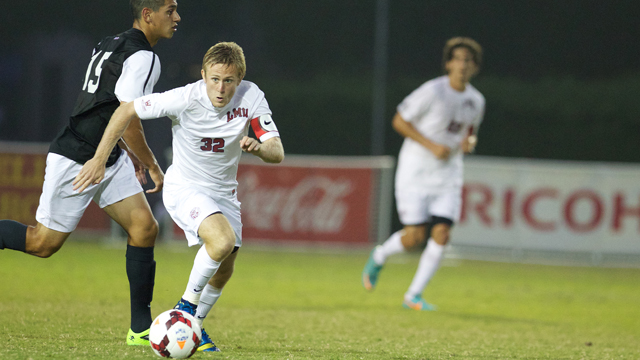 LOS ANGELES – Consistency has been hard to find in the West Coast Conference. Teams can be good from year-to-year, but no program has been able to repeat as champion since Santa Clara(m) in 2007.

A grueling league schedule and a lack of a conference tournament make it a tricky proposition to come out on top in the constantly overlooked WCC.

Loyola Marymount hopes to end that stream this season.

The Lions, picked third in the 2013 coaches’ preseason poll, won the conference with a four-point cushion. The Los Angeles program returns the vast majority of the squad for this year and has eyes on returning to the top again.

“The way I look at it (with this group especially) is we really only graduated one starter so we have a really good group returning,” LMU head coach Paul Krumpe told TopDrawerSoccer. “We’re really excited about the prospect of this year. It is tough to repeat in the WCC but if any team can do it, I think this is the team that is built for it.”

Last season’s success was short-lived though. Stanford(m) bounced LMU from the NCAA Tournament in the first round after a heartbreaking defeat in penalty kicks.

“This is group showed a lot of success last year,” Krumpe said. “We did lose in the playoffs – we lost in penalties on the road. Hopefully, that burns inside these guys to go out and win the WCC again and try to go further in the NCAA tournament.”

The coaching staff will be looking at some of the seniors to keep that hunger alive this season. Fifth-year defender Craig Nitti headlines the list of returners. The 6-5 giant center back was named to the 2014 MAC Hermann Trophy Watch List in early August after earning a spot on the All-WCC First Team last season.

“I would stack up my backline against anyone in the country,” Krumpe said. “We’re solid in the back and our goalkeeping is fantastic. Paul Blanchette was the WCC Goalkeeper of the Year last year. We need to be a little bit more creative and put a few more chances away. If we can score a few more goals, we can turn ties into wins and wins into comfortable wins. We were in a lot of tight games last year.”

Ten of LMU’s 13 wins in 2013 came with a one-goal difference. Improving the attack will likely fall onto the feet of midfielders John McFarlin and Adrien Perez. The latter was the leading scorer for the squad during his freshman campaign in 2013.

“It was just so easy to bond with this team,” Perez said about his freshman campaign. “They treated me well when they brought me in. It was a great fit and we worked hard during the season. I give my own success all to my team.”

Selfless may be Perez’s personality off the field, but between the white lines, he is lethal and punishing with his left foot. Perez soared onto the national scene with 11 goals and four assists in 2013. His quality was not much surprise to the LMU staff.

“The first time I saw him play, the score was 4-4 and he scored all four goals for his team,” Krumpe said. “I thought, okay we could probably use this kid. He was good from the start for us, but he really took off in the conference schedule. He got comfortable and had a fantastic finish to the season.”

It was a steep climb from a prep career in the relatively new obscurity of high school and club ball (opposed to the growing influence of the Development Academy) to being one of the top freshmen in the country.

“I had an interest in playing in the [Development] Academy,” Perez said. “But I decided to stay with high school because I wanted to stay with my friends and I knew that we had something special there and we did.”

LMU has been one of the more successful programs in recruiting players in the LA area from high school and club teams.

“The level of the Academy is much higher than high school, but I still get out and see high school games,” Krumpe said. “There is a lot of talent in the country that is not playing in the Academy, whether it is inconvenient because they are too far away or because they can’t afford it. If you go out and look, you can find talent.”

Krumpe and his staff found it with Perez and other members of this LMU squad. Now, they are hoping this compilation of players can snap the streak of teams failing to repeat as champions in the WCC.

“The goal for the team is to get another WCC Championship, back-to-back, and go further in the [NCAA] tournament,” Perez said. “We have a good team and it’s going to be a good season.”

The coaching staff was also optimistic about the outlook of the season.

“I like where we are, we are just starting our preseason, but I’m excited about the prospects for this year,” Krumpe said.

LMU opens its campaign on Friday, August 29 at Duke(m), which should be a good barometer for where the Lions stand in the pack.