Fairfield could not be stopped in the Metro Atlantic Athletic Conference last season. The Stags were undefeated in league play, won the regular season, and won the MAAC Championship crown. The season came to an end in the first round of the NCAA tournament in a close 0-1 loss to Brown.

Not much is expected to change this fall with the Stags returning many of their star players from last year’s squad. 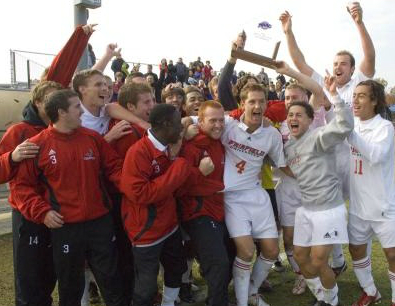 However, the Iona College Gaels may have something to say about that. Over the last few years, Iona has become one of the more enjoyable teams to watch in the nation. Last season, the New York program averaged 1.80 goals per game, which ranked in the top 20 in the nation.

The Gaels only lost two players from last year’s roster.

The showdown at the top of the MAAC is going to be tight this year, but also for years to come as both programs have committed to building for the future.

It has been a busy summer for the Fairfield Stags. Starting goalkeeper Michael O’Keeffe spent a few weeks over in London playing for New Zealand at the 2012 Olympic Games. The Kiwis only managed one point from three games, but O’Keefe did start and play every game.

Forward Jordan Ayris also had quite the summer with a great showing in the USL’s Premier Development League. His nine goals and five assists helped Forest City London to the National Championship game, which will be played on August 4.

With O’Keeffe and Ayris on the roster for the fall, the expectation for the Stags is to duplicate 2011’s run through the league.

Junior midfielder Franklin Castellanos led the nation in assists last year with 14 in 20 games. The New Jersey-native will continue to be the orchestrator of the Iona attack.

Surrounding him is a plethora of attacking options including recent call up to the Ghana U20 Men’s National Team and former U.S. U18 MNT forward Samuel Adjei.

The Gaels will need that dynamic attack to break down what is expected to be a very strong Fairfield defense in 2012.

The Loyola Greyhounds have sneakily been one of the most consistent programs in college soccer over the last few decades. The Greyhounds have notched at least 10 wins in 27 of the last 31 seasons.

That streak is likely to continue this year with a majority of last season’s roster back including two first-team All-MAAC selections in Gerwyn Jones and Stephen Dooley.

The biggest question this fall for the Purple Eagles is how to replace Carl Haworth. The striker scored 12 goals and added 8 assists in his final season with Niagara in 2011.

Sophomore Callum Willmot is the expected replacement after scoring five goals in his debut campaign. The gigantic striker, listed at six foot, six inches, will be the focal point of Niagara’s attack in 2012.

In January, defender Matt Wendelken was called into camp with the U.S. U20 Men’s National Team. The sophomore was the first Marist player to ever receive the honor, and then he transferred.

Wendelken joined Boston College for the 2012 season, and the Marist Red Foxes have to be licking their wounds.

This season might be a bit of a struggle with only 13 returners for 2012. Incoming transfer Greg Davis, formerly of Providence, should immediately step into the attack and help with the goal scoring duties.

The Manhattan Jaspers made a surprise run at the end of last season to reach the MAAC Championship game. With wins over Loyola and Iona, the Jaspers showed they are capable of hanging with the top teams in the conference.

The question for 2012 is if they can consistently reach that level.

Junior college transfer Eric Mavakala (Marshalltown Community College) is expected to step in immediately at center back. The physically imposing defender is hoping to slow down some of the strong attacks in the MAAC.

With a second-year head coach, a pretty large incoming class, and some promising returners, there are building blocks in place for the Rider program. Head coach Charlie Inverso nabbed a win in the first round of the MAAC Championship in 2011. Inverso is hoping to top that in 2012.

The Golden Griffins only graduated one player from the 2011 roster, so this is a group that will not have much searching to do for this year’s roster.

The Siena Saints are a bit of an enigma in the MAAC. Siena can be fiercely competitive (i.e. 1-0 wins over Ohio State and Iona last year), but also can suffer from a lack of scoring (only 16 goals scored in 2011).

If head coach Gareth Elliott can find (or develop) a consistent scorer, the Saints could make a run in the MAAC in 2012.

Not so gently, the Belmont Bears men’s soccer team was shoved out of the Atlantic Sun Conference for 2012. Belmont moved to the Ohio Valley Conference to accommodate the basketball program, but with no men’s soccer league in the OVC, the Bears still need to find a long term home.

For now, the Bears are nomads, but not entirely forgotten. Belmont’s roster includes some talented players like Brandon Tarr (10 goals in 2011) and Nico Olsak (four goals, eight assists in 2011), as well as incoming talent like Alfred Edmonds (De Anza Force, defense).

With games against Louisville, Memphis, and NC State, the Bears are still going to be in the thick of things in 2012.

With the Atlantic Soccer Conference’s disappearance, there are a few teams that are stuck without a home in 2012. Both Adelphi and NJIT have taken on taxing schedules in hope to keep the level of competition up until the programs can find new homes.