The Missouri Athletic Club Hermann Trophy Watch list released at the beginning of the 2012 women’s college soccer season had 38 names on it.

By Nov. 29, the NSCAA will narrow down the list to 15 semifinalists, with 3 finalists named on Dec. 6 and the award given at a ceremony in St. Louis Jan. 11. 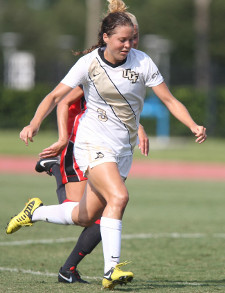 This week and next, we’re reviewing the seasons of the nominees. Following are the first 19 (alphabetically) players on the Watch List.

Caitlin Alves, Hartford: The talented midfielder started all 18 games for the Hawks, recording 3 goals and 4 assists and was named to the America East All Conference 2nd Team.

Natasha Anasi, Duke: Anasi has started all 20 games for the Blue Devils thus far, leading the team in minutes played. She was named All Atlantic Coast Conference 2nd Team.

Audrey Bledsoe, Wake Forest: The goalkeeper has played 22 matches, recording a 0.80 goals against average and a .763 save percentage. She was named All-ACC 2nd Team.

Morgan Brian Virginia: She missed a handful of matches at the beginning of the season due to her role in the U20 Women’s National Team winning the World Cup. In 13 games for the Cavaliers, the uber-talented attacking midfielder scored 4 goals and recorded 6 assists. She was named All-ACC 1st Team.

Chelsea Buckland, Oregon State: Missed the season due to a knee injury.

Zakiya Bywaters, UCLA: The fleet-footed attacker scored 13 goals with 4 assists in 20 matches, leading the conference in goals and points. Was named Pac-12 Player of the Year.

Vanessa DiBernardo, Illinois: Missed the beginning of the season as she was an influential part of the U20 Women’s National Team’s winning effort at the FIFA World Cup. In 15 matches, scored 8 goals and had 4 assists. Named All-Big Ten 1st Team.

Crystal Dunn, North Carolina: The fast and tough defender returned to the team after helping the U20 Women’s National Team win the FIFA World Cup. Dunn started 12 matches and played more than 1,000 minutes. She was voted All-ACC 1st Team.

Christine Exeter, Louisville: The forward played 12 matches and scored once.

Adrianna Franch, Oklahoma State: In 20 matches, the goalkeeper recorded a 1.07 goals against average and a .782 save percentage in what was a tough season for the Cowgirls. She was voted to the All-Big 12 1st Team.

Kelsey Haycook, La Salle: In 13 matches, Haycook scored 9 goals and added 4 assists. She was voted to the All-Atlantic 10 2nd Team.

Ines Jaurena, Florida State: Started every game and played more than 1,700 for the Seminoles, scoring 4 goals from the back line. She was voted All-ACC 1st Team.

Kaitlyn Kerr, Duke: Played in 20 matches for the Blue Devils, starting all but one. She scored 8 goals and had 5 assists, but was not named to the All-ACC team.

Nadia Link, Long Beach State: Scored 8 goals and had 9 assists for the 49ers. Was voted Big West Conference Offensive Player of the Year.

(Next Week – the remaining 19 players)