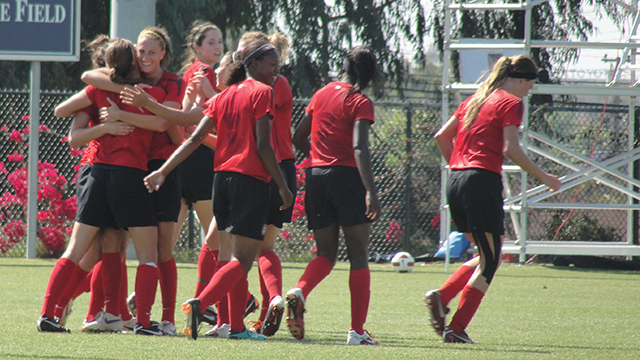 CARSON, Calif. – Makenzy Doniak has had her looks with the youth national teams in the past year, specifically the U18 age group, but this week was her chance to prove that she could play with the U20 Women’s National Team.

On Thursday, it looked like she made that statement loud and clear.

Doniak, the younger sister of Kylie Doniak, raced past defenders like they were traffic cones on her way to a goal and an assist in the opening half against the U23 WNT.

However, the afternoon turned dark when a reckless challenge from behind left Doniak with an apparent shoulder injury that required her to be carted off the field.

The Virginia-bound forward was the highlight of the 3-1 victory for the U20 WNT that featured many of the reserves for both teams, as the coaches assess their rosters ahead of international competition. 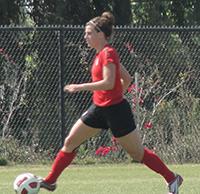 “A great opportunity to get those other players involved and see what they can do against a team that can move the ball,” U20 WNT head coach Steve Swanson said prior to the game. Swanson’s group is preparing for the 2012 FIFA U20 Women’s World Cup, which kicks off in Japan on August 19.

“We will be evaluating some of our less experienced players,” U23 WNT head coach Randy Waldrum said before the game. “We are just looking at who is ready for that next level.” The U23 WNT is preparing for an international tournament in Norway in June.

Thursday’s clash showed some highs and lows for both teams, with the reserve strikers from the U20 WNT definitely having the better of the play.

Doniak put the younger side up 1-0 in the 22nd minute when she fought off a few defenders and delivered a nice sliding finish for the opening goal.

In the 39th minute, Doniak turned provider when she linked up with Mandy Laddish at the top of the box for a quick 1-2 in traffic. Laddish buried the shot into the lower corner to double the lead for the U20s.

Shortly after half, the U20s nearly made it 3-0 when Doniak flew past her mark yet again and crossed it to substitute forward Becca Wann. The Richmond forward ambitiously hit a side volley from 18 yards out that took some paint off the cross bar, but did not cross the line.

Stanford’s Chioma Ubogagu netted the third goal for the U20 side in the 75th minute. Ashley Meier’s shot from 20 yards out was blocked into the path of the Cardinal forward. Ubogagu calmly turned and ripped it past the keeper to give the younger side a 3-0 advantage.

But goalkeeper Abby Smith, despite having an excellent game, could not claim the clean sheet. With only seven minutes left in the game, U23 WNT captain Toni Pressley hit a 20-yard free kick from dead center into the upper corner.

The U20 WNT returns to the field on Saturday with an international friendly against New Zealand.