There’s plenty to be optimistic about with Marquette women’s soccer these days.

Markus Roeders’ team is having another good year on the field, currently sporting a 12-2-2 record. The Golden Eagles are also 8-0-1 in the Big East and have clinched the American Division regular season title for the conference.

But Roeders is committed to not letting national top 10 status get into the Marquette psyche. 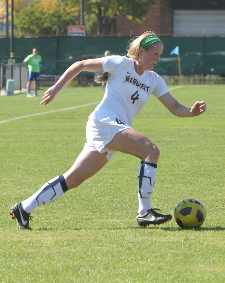 “We’re not going to get too far ahead of ourselves. We don’t’ want to lose sight of what we need to do day to day,” Roeders said. “We’re an emotional, high energy team. If we worry too much about two weeks or three weeks ahead, we will start channeling that energy in a direction we don’t need to be doing yet. Let’s just take care of today and this weekend. If you talk to players around our team, they are thinking of nothing else but our next match and finishing the regular season.”

After Saturday’s regular season finale against South Florida, the Golden Eagles will be hosting a quarterfinal game in the Big East Conference Tournament, and then awaiting word on their bracket for the NCAA Tournament. Last year Marquette lost in the 2nd round to Penn State, and Roeders admitted the early exit following a strong regular season left some disappointment.

“You always have that crap feeling that comes with a loss,” he said. “The group we had returning knew we could have gone farther. They refocused and realized the next opportunity would be this year. Now we have multiple goals.”

First among those goals is to play with a style that involves hard work and maintaining possession of the ball.

“We pride ourselves on being an extremely hard-working team. As a unit everybody attacks and everybody defends,” Roeders said. “We’ve been willing to take a certain level of risk with that concept in mind.”

The team plays a 3-5-2 formation with some significant modifications.  The back line includes Katie Hishmeh on the left, Megan Jaskowiak on the right, and Emily Jacobson in the center.

“Emily has taken over the role that Kerry McBride used to play, only they are different types of players,” Roeders explained. “Kerry was a more technical player. Emily is stronger, and enforcer who reads the game extremely well.”

Just ahead of the back three, and sometimes slipping back to make a back four, is senior Aly Miller.

“Aly is really the heart and soul of this team,” Roeders said.

In fact, 14 Marquette players have found the back of the net this year, helping the team to 43 goals scored against just 11 allowed thus far.

“In the preseason she had an injury and it took her a few weeks to get into form, but she has been strong,” Roeder said of the Real Colorado product.

Roeders said the goal of playing an attractive style isn’t mutually exclusive with the desire to win.

“Our possession play is important. The concept is based on having outlets and options when one player has the ball. The angles are always important,” he said. “In the end we want to win games. Sometimes you might not possess the ball all you want. If you have to be more direct, or just ram the ball down someone’s guts to get it done, we’ll do that too. We have athleticism to go with our skill.”