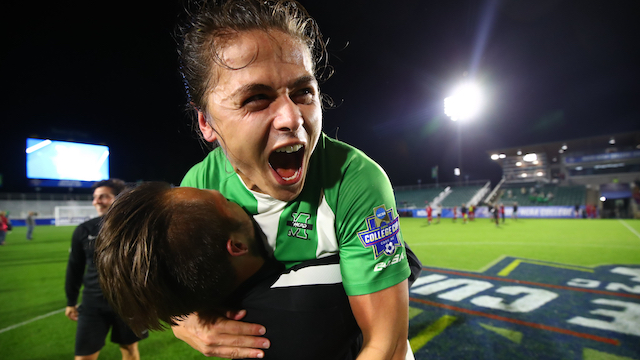 Marshall is the 2020 NCAA Division I National Champions. A team built on belief in their coach, their teammates, and their plan, saw the realization of their wish in front of a rambunctious crowd on Monday night in Cary, North Carolina.

The Men’s Division I Championship game went to extra time for the fifth time in the last seven Men’s College Cup Championships. Out of the previous four installments, only once was the game ended on a golden goal. Jamil Roberts made it twice.

Roberts was the star once again. His 97th minute golden-game sealed the win for the Herd. The senior scored his third game-winner in as many games to lift Marshall to the 2020 Men’s College Cup Championship, the first championship in program history.

“Déjà vu,” Roberts said in the postgame press conference about his goal. “Vitor [Dias] does something no other player on the pitch can do. Keeper makes a decent save. I’m there to tap in. I make that run 20-30 times a game, it only takes one time. As coach says, I love tap-ins.”

Milo Yosef started the move for the goal. The attacker brought the ball into the attacking third on the dribble before laying it off to Vitor Dias. The initial shot was blocked, but it fell to Dias for a second effort. His subsequent try forced Indiana goalkeeper Roman Celentano into a brilliant diving save. The rebound took a spin and hit off the post for Roberts to put it away for the lone goal.

“It feels surreal,” Marshall head coach Chris Grassie said about his emotions after finally winning the national championship. “I’ve been on the wrong side of this press conference too many times. To finally win it is a bit of a relief. I’ve found my attention turning to 2021. How do we evolve this? How do we grow from this? Almost all of these guys (except Jamil) are coming back, how do we evolve? Because teams are going to watch us and learn from this.”

After a scoreless 90 minutes and some added on in extra time, the celebration erupted quickly. Marshall fans sprinted onto the field. The wave of green overwhelmed the security and the party was on for the supporters who have been having a party in North Carolina for weeks while supporting the Herd in the bubble for the tournament.

There was plenty of history for Marshall with the winning effort on Monday. The Herd are the first unseeded team to win the National Championship. It is the first soccer national championship for a Conference USA program.

Historic moments require monumental efforts and Marshall supplied that throughout the tournament and especially in the title game. Marshall’s defense limited Indiana to only one shot on goal over the course of 97 minutes of play.

Indiana had zero shots on goal in the first half, but the Hoosiers certainly had chances. The best look came off the head of Daniel Munie on a corner kick. The defender rose above his mark and headed the ball toward the lower corner, but his shot was just inches off the target and hit the post. Indiana finished the half with six shots. Herbert Endeley and Victor Bezerra also had shots in the first half.

“We did create the chances we needed. It was there for us,” Indiana head coach Todd Yeagley said in the postgame press conference.

Marshall peppered Celentano’s goal with four shots on frame in the opening half. The Indiana goalkeeper benefitted from an organized defense in front of him and had a clear line of sight on all of the shots. His best block came on a one-hand effort to deny a shot to the lower corner of the goal from about 20 yards out. Celentano finished the game with seven saves, a season high for him.

Marshall was credited with a sizable lead in the possession in the first half with 63% of the ball. The Herd also had four corners and eight shots total in the opening half. Marshall ended the game with nearly an identical advantage in possession (62-38).

Indiana finally had a crack on goal early in the second half. It was Endeley providing the opportunity for Indiana. The speedy winger was tripped up on his way to goal, which gave Bezerra and Indiana the chance 20 yards from goal. Indiana’s leading scorer had a good rip on it, but Semmle did well to get his body behind the ball and blocked the shot. Joseph Maher was there for the rebound, but the center back was in an offside position on the initial shot.

Even with the lack of shots on goal, the game did not lack for chances. Indiana’s players were heartbroken about the missed opportunities. The emotions were still raw for Yeagley after the game.

“Kids come to IU to be in a championship match,” Yeagley said. “I told the guys that everyone is proud of them. I was in their same shoes as a senior, losing my last game.”

For Marshall, the elation had not fully set in yet. Grassie talked about earning a hotel room key after the championship game during his College Cup preview press conference. The Marshall head coach had been on the losing end in the championship game three previous times, and his goal was to earn an extra night in the hotel to enjoy the moment after winning the title on Monday.

“I grabbed two,” Grassie said during the press conference when asked if he grabbed his hotel room key yet.

The England-native has a team and school that loves him. He also has nearly all of his players returning for next season. The rest of college soccer should be on notice that the Herd are here to stay.