A pair of victories and an upset loss by previous #1 North Carolina has lifted Sasho Cirovski’s Maryland Terrapins  to the top of the TopDrawerSoccer.com Tournament 48 National Ranking this week. 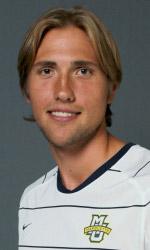 Undefeated Connecticut moves to #2 while the Tar Heels fall to #3. Akron, UC Santa Barbara and New Mexico all move up a spot within the top 10 after a loss by Creighton to Old Dominion, who is a big upward mover this week.

Meanwhile, Marquette defender Axel Sjoberg is our TopDrawerSoccer.com Men’s College Player of the Week after an impressive weekend to help the Golden Eagles past Michigan and Michigan State.

First, Sjoberg went 90 minutes in the back line and scored both goals in a 2-1 home victory over the Wolverines. Then he played 107 minutes before tallying the golden goal that lifted undefeated Marquette past Michigan State 2-1.

The honor, along with the 11-player Team of the Week, is awarded each week after a review of match reports through DI Men’s Soccer.

GK: James Belshaw, Duke – Recorded 7 saves and scored a goal to help Duke to a pair of shutout wins.

D: Damian Rosales, SMU – Played 184 minutes in the back line to help the Mustangs record a pair of shutout wins.

D: Nikko Boxall, Northwestern – Played 191 minutes in the back  to help the Wildcats to a pairof shutout wins, scoring a goal in the process.

F: Leonardo Fernandes, Stony Brook – Scored 3 goals and added an assist to help the squad to a pair of wins.

F: Will Bates, Virginia – Scored a hat trick for the Cavaliers.

F: Jake Pace, Maryland – Scored twice off the bench to help the Terrapins to a pair of victories.

F: Andy Riemer, Georgetown – Scored 3 goals for the Hoyas in their win over Penn.