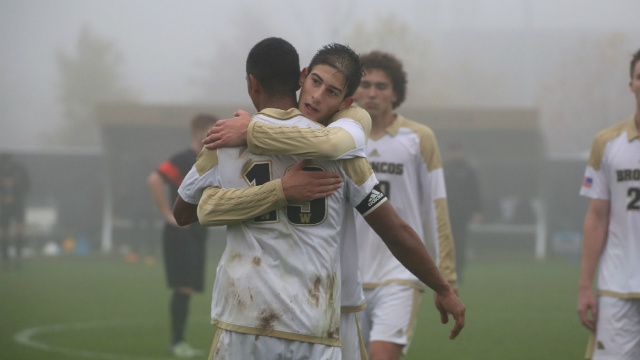 Conference tournament play comes to a head over the weekend, as all automatic bids for the 2017 men’s Division I tourney will be sewn up by the end of Sunday.

Preview five conference tournament clashes over the next few days below.

The ACC men’s final is intriguing for a variety of reasons. Wake and UVA avoided each other during the regular season, so this marks the first time the two play each other in 2017. It’s not exactly a David vs. Goliath situation, though the top-seeded Demon Deacons look like the clear best team in the country, and can keep rolling with a second straight ACC conference tournament title. Jon Bakero provides a reason to watch Wake Forest just about every time he steps on the field, one of several talented players. However, this isn’t a UVA side from a few years ago, as the likes of Edward Opoku and Pablo Aguilar are afforded the freedom to make this an entertaining team. Of course, there’s every reason to believe the Cavaliers will sit deep and look to break against a Wake team that loves to dominate the ball.

It’s been a much improved 2017 for the Atlantic 10, with all four of the Final Four in with a shout when it comes to an at-large bid in the tournament. The stakes will be highest for Rhode Island, which can seal its chances with a win against VCU. Buoyed by an outstanding senior season from Rafael Andrade Santos, VCU enters the weekend with one of the best attacks in the league. Putting away Rhode Island on Friday night will be the precursor for a hopeful win in the A10 final, an elusive prospect over the past few seasons for VCU. The other half of the bracket is the expected vs. the surprise table topper.

Massachusetts didn’t exactly come from nowhere to win the regular season title this year, but didn’t substantially improve after finishing 2016 with a 7-9-3 record. Freshman Davis Smith has been one of the finds of the season, as he scored nine goals and added five assists in his first season of college soccer. Fordham can’t be counted out, of course. A10 Defensive Player of the Year Matthew Lewis has been a big part of this year’s strong season, while brother Jannik and Janos Loebe are both a handful in the final third.

Could the Big Ten tournament provide the most entertaining action of the weekend? Potentially. There’s the clash of two high-powered offenses, as Michigan is led by its electric front man Francis Atuahene. Whether it’s the Wolverines or semifinal foe Wisconsin, another impressive offensive outfit led by Chris Mueller, they’ll serve as worthy opponents with Indiana (provided the Hoosiers win as expected). The nation’s top defense has been consistent all year, though the reliance on freshmen goal scorers does lead to an attack that can be hit or miss at times. Mostly, Mason Toye and Griffen Dorsey have been on song, and they will likely more than Ohio State can handle.

Sunday’s Big East final is a chance for revenge for the host Hoyas, which lost 1-0 to Xavier earlier this year in Ohio. The good news for Georgetown is that sophomore striker Achara returned to the field in Wednesday’s Big East semifinal win, and his ability to stay on the field is key for the team’s hopes for Sunday and beyond. Freshman Derek Dodson is more than an able backup, although he isn’t quite as electric as his sophomore teammate. Chris Lema is a key man in the Georgetown midfield, while center back Brandon McDonough’s emerged as a strong piece of the team’s defense. McDonough’s energy will be focused on slowing down Big East Co-Offensive Player of the Year Brandon Guhl. Cory Brown and goalkeeper Eric Dick are difficult to break down; Sunday’s matchup should be fantastic all around. It’s also must-win for the Musketeers, who need the automatic bid to assure themselves of a spot in the NCAA Tournament.

For the first time in a long time, the MAC championship won’t go through Ohio, after Western Michigan completed a sensational 2017 regular season. Hosting this weekend’s four-team tournament, the Broncos will look for wins against West Virginia and the winner of Akron-SIUE to make it a double. Brandon Bye has been at the heart of most of Western Michigan’s success this season, and he’ll look to reprise that role on home turf. West Virginia needs a tournament win to secure a spot in the NCAA Tournament. A strong start to the season faded with two different three-game winless streaks for the Mountaineers. They’ll take heart from the regular season meeting with WMU, losing 1-0 in overtime. Scoring goals have been an issue, as they’ve bagged just 20 this season, while conceding 22. Even a win in regulation could be the jolt needed to boost WVU’s RPI.

Since losing to Western Michigan back on October 7, the Zips have spun off eight wins in a row. Forward Stuart Holthusen has six goals in his last three games, and Akron’s incentive to win the conference tournament away from home is amplified by the chance to improve its overall seeding for the NCAA Tournament. Goalkeeper Kyle Dal Santo can always stand on his head to keep SIUE in any game, and that’ll be needed against an Akron team firing into form.