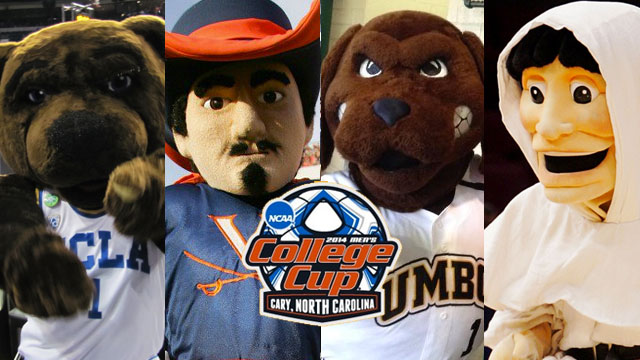 The College Cup this year sets up as a battle between older powers and younger pretenders to the throne. Virginia and UCLA have 26 College Cup appearances and 10 national titles between them, while Providence and UMBC have never been to this stage. That casts both matchups as battles between the old guard and new blood.

With the tournament at Cary, North Carolina’s WakeMed Soccer Park rapidly approaching, here’s a look at the two remaining matchups in the field. Will this be the year of the upstarts, a season in which traditional powers wrest back control or something in between? We’ll find out soon enough.

It’s hard to overemphasize the difficulty in UMBC’s road to here. The Retrievers, who are the big underdogs of the Final Four, didn’t have a single home game in the tourney, a fact they knew they’d have to overcome in order to qualify for their first ever College Cup. They’ve had to travel 4,348 miles to play Wake Forest, Maryland, Louisville and Creighton in notably difficult environs. The latter three especially are renowned for their difficult stadium experiences for visiting opponents. Further, all four of those teams have been in a College Cup since 2009, including in-state rival Maryland’s finals appearance just last season. No pressure.

But the Retrievers haven’t cracked, haven’t let their lack of big-game experience in College Cups distract them from their mission. In fact, they seem to have learned quite a bit from 2013, when a loss to Connecticut in penalties in the second round dismissed them early. Half of UMBC’s victories in the tourney have come off penalties, including a nervy round against Creighton in the Round of 8. They still haven’t surrendered a goal in any of those four games.

That shouldn’t detract from Virginia’s road to Cary, which was fraught with a few similar perils. The Cavs made a 3-1 win over a very good UNC Wilmington team look far easier than it should’ve before registering the upset of the tournament. Virginia walked into the house of the defending national champs and dumped a veteran-heavy Notre Dame side 1-0 on a bitter cold evening. A madcap win over Georgetown in the next round, which included a final-minute equalizer and steely resolve in the extra periods, cemented this Cavs team as one of destiny already. This is Virginia’s 12th trip to the College Cup, and it’s the only team back here from last season. An impressive accomplishment on its own.

At least on paper, this game sets up as a cagey low-scoring affair that could be decided by a lone goal. UMBC’s Oumar Ballo-led back line hasn’t given up a goal since Nov. 15, and there aren’t many teams in history that’ve wound through the tourney with four consecutive shutouts, three against seeded teams. Virginia has a solid attack spearheaded by agile forward Darius Madison, and Scott Thomsen can legitimately trouble the wings. But is it better than what UMBC’s already seen? Probably not.

That said, UMBC’s had similar trouble scoring goals, and Virginia’s proven it can score when it needs to against good defenses in this tournament. Beating Georgetown and Joshua Yaro proved that. Virginia is adept at going over the top, which UMBC’s largely limited against teams with quality doing just that. This game lines up as the prototypical scoreless draw decided in penalties, but it could open up uncharacteristically if either of these teams strikes for an early goal off a counter or a set piece. Either way, the chess match should be fascinating.

For a moment, it looked as though there might be no high-seeded heavyweight in the 2014 College Cup. In the quarterfinals, unseeded North Carolina defied the odds by coming back from 3-1 down on 10 men on the road to force a penalty crapshoot. UCLA managed to fight through it to earn its way back to the College Cup for the first time since 2011 and the 14th time overall. The Bruins have been tournament underachievers over the past decade, and the fact that they haven’t won this tournament since 2002 no doubt looms over the program like a guillotine. That said, there isn’t a more talented team in the field than UCLA, which has all the expectation and, by extension, all the pressure.

UCLA’s road here’s been dicey, but the Bruins repeatedly proved their attack can outweigh some off-balance mistakes from a defense that’s had its shaky moments. Midfield maestro Leo Stolz cancelled out an early San Diego goal in overtime for a 2-1 win. Goals from three separate players got the Bruins past California in a 3-2 barnburner. And they had to hang on late to beat UNC despite another triple on the scoreboard. So while UCLA’s scored eight goals, more than any other team in the tourney, it’s had to squeak by opponents due to some defensive wobbliness.

That puts Providence in a uniquely difficult position. The Friars are newcomers to this stage, but it hasn’t stopped them from dismantling Dartmouth 3-0, holding powerful UC Irvine scoreless in a 1-0 win and then racking up three goals in a 3-2 upset of No. 3 Michigan State on the road. The encouraging thing for Providence is that it’s won in a variety of ways in the tourney, from blowouts to tight defensive battles to relatively high-scoring affairs. If UCLA’s form holds true to pattern and the game doesn’t clam up as College Cup battles are wont to do, this meeting looks like it’ll fall in the final category. Providence will probably have to score goals to keep this one in line.

The bonus is that the Friars are capable. Dominik and Fabio Machado are in ripping form, and both scored in the win over Michigan State. Coupled with Markus Naglestad’s ability on free kicks, which ultimately won them their meeting with UC Irvine, Providence is far more multi-faceted than UCLA would like. If Providence can rock UCLA back on its heels with an early goal, or at the very least take it into halftime scoreless, this one could turn into a fantastic meeting of varied attacks.

But in all honesty UCLA is the story here. If the Bruins play like they’re capable, they’ll be in the College Cup finale to play for their fifth national title. They have the quality to play through the midfield against a Providence team that will probably have to play on the counter. There’s so much next-level talent on this UCLA team that it boggles the mind. Brian Iloski, Abu Danladi and Stolz make the attack a scary proposition for any back line, and while the Bruins' defense has yet to put up a postseason shutout, simply outscoring good teams has worked so far. UCLA hasn’t played a cohesive game from back to front yet, and the prospect of this team clicking into an even higher gear should strike fear into the rest of the field.

But will it happen? Wait and see time.