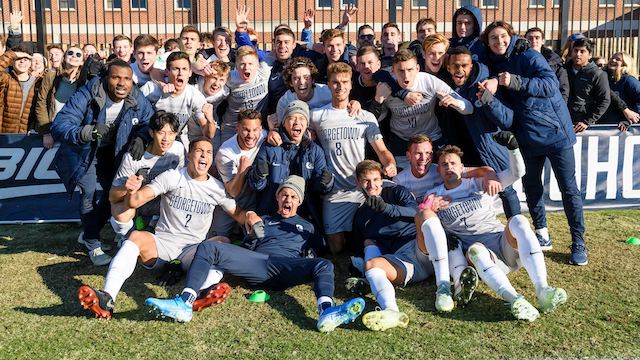 The Men’s College Cup kicks off on Friday from Cary, North Carolina. The top three seeds in the event are still alive. Stanford is the lone team to pull an upset to make it to this round. The No. 7 seed is back in College Cup for the fourth time in five seasons, incredible testament to the consistency of the Cardinal program.

TopDrawerSoccer previews the two games and gives a prediction for each game.

Preview: Georgetown knocked off Pac-12 champion Washington in the Elite Eight behind goals from Jacob Montes and Derek Dodson. The Hoyas are headed to the College Cup for the second time in program history. Georgetown made it to the National Championship game in 2012 before losing to Indiana. Stanford advanced to the College Cup via a penalty kick shootout victory over Clemson. The Cardinal is back in College Cup for the fourth time in the last five years. This is the program’s seventh trip to the College Cup. Andrew Thomas was the hero of the last round with two saves in the penalty kick shootout. “Andrew did his homework and came up with some big saves,” Stanford head coach Jeremy Gunn told gostanford.com. “We prepare very, very diligently for penalties and confidence comes from good preparation.” The dominance of Stanford in the penalty kick shootout is well-known. Stanford has won nine penalty kick shootouts in a row in the NCAA Tournament dating back to 2002. The task for Georgetown is to learn from Washington’s success this season and try to decide the game within 90 minutes. “We started out preseason with a group that believed they were deep and believed they were good and then the season proves it out,” Georgetown head coach Brian Wiese told guhouyas.com after Saturday’s win. “I’m just incredibly proud of the team and that the older guys, the senior leadership has been excellent. The evolution of each player has continued to progress through the season and it’s what you need to have this kind of a run. You need a little bit of luck, but you need a group of committed good players.”

Key Matchup: Ousseni Bouda vs. Tomas Romero - This is not a traditional match-up as it is a forward against a goalkeeper, but both freshmen figure to be key players in this game. Bouda has hit a dry-spell in scoring, as he as not found the back of the net since Oct. 31. However, he is knocking on the door and could be a breakout star of this College Cup. Bouda had a chance that nearly took the goal out of the ground in the last game. Romero is not going to be tested much in the game, but he will be tested. Stanford is excellent at making the most of chances and arguably the best team in college soccer at set pieces. Romero has been sharp throughout the NCAA Tournament with seven saves over the three games.

Preview: Virginia is back in the College Cup for the first time since 2014. It’s the 13th appearance in College Cup in program’s history. The Cavaliers clinched a spot in the semifinals thanks to Joe Bell, who scored in overtime off a rebound on his penalty kick. Bell finished the game with a pair of goals to help Virginia knock off SMU. Wake Forest took down UC Santa Barbara in the other quarterfinal match-up from that side of the bracket. Alistair Johnston scored the lone goal in that game. Johnston’s goal clinched Wake Forest’s sixth appearance in the College Cup - the last one came in 2016. “We talked all week about fighting to play football, fighting to play soccer, fighting to play our game,” Wake Forest head coach Bobby Muuss told godeacs.com after the game. “I think the guys did that for some periods of time. I don’t think anyone was really overly excited about the performance, but we said it’s a results-oriented business at this point...I’m extremely proud of the way they managed the last five minutes of the game. The moral of the story is that one of our goals is checked: we wanted to go back to the College Cup and we earned the opportunity to do that.” Virginia is going to be another battle for Wake Forest. The two teams combined for 31 fouls and only four shots on goal in the previous meeting this season. Virginia won that meeting 1-0 behind a goal from Nathaniel Crofts.

Key match-up: Joe Bell vs. Isaiah Parente - Bell missed the earlier meeting this season while on international duty for New Zealand. Bell is the catalyst for Virginia, and the junior midfielder can dictate the game from the center of the field. Parente is capable of pulling off the same influence on the game for Wake Forest. The Demon Deacons need to keep Parente on the ball as much as possible to try to break down the Virginia defense.