Midwest college soccer powers congregated in South Bend over the weekend, and the Fighting Irish came away as big winners, capping it off with a 3-1 defeat of Akron.

The #12-ranked Notre Dame side extended its record to 5-0-0 on the year, beating Oregon State on Friday, before getting the better of #4 Akron 3-1 on Sunday.

Dillon Powers, Ryan Finley and Leon Brown scored for Notre Dame, as the Zips went down to 10 men in the first half after Aodhan Quinn was sent off in the 30th minute. 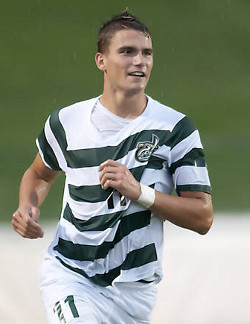 "Akron's a good team and I feel we were a little intimidated by their reputation and they (Akron) really handled the opening of the game very well," Irish head coach Bobby Clark said after the game. "We then got our strength and Dillon Powers did a fantastic job of just being a captain and a leader. We were getting into the game and then they helped us with the red card. From then on we completely took over."

Midfielder Scott Caldwell picked up the lone goal for the Zips in the fourth minute.

High-flying Terps roll on the road

In its fourth game of the season, #2 Maryland continued to roll in the final third of the field, smacking four goals on the road past Boston College winning its ACC opener 4-0.

"It was a great team effort. This is always a tough place to play well and get a result," head coach Sasho Cirovski said after the game. "Tonight we had contributions from everybody. I'm really proud of the maturity the players showed with the rain delay to stay tuned in. I knew they were ready for this game and they showed it."

With the four goals, the Terps have now scored 15 goals in those four games, including 11 unanswered goals dating back to a 2-2 draw on August 31 against UCLA.

Christiano Francois, Schillo Tshuma, Jake Pace and Widner Saint Cyr all found the back of the net Friday night against Boston College.

A strong start to the 2012 season continued for the #21 Monarchs, picking up two wins over the weekend at the Stihl Classic.

After opening up the weekend with a 6-0 win over Seton Hall, Old Dominion sputtered in the first half against a solid Winthrop team that held the Monarchs to a 1-1 draw at the break.

But goals from Chris Harmon and Gideon Asante sparked the team to life on the way to a 3-2 win.

“We challenged them in the locker room at half time and they met the challenge, came out and the energy was very different,” head coach Alan Dawson said after the game. “Very, very pleased with the second half performance.”

The talent drain on #1 North Carolina was significant over the offseason, but so far, so good for the defending champions, as the Tar Heels won its ACC opener 2-0 at home against Virginia Tech on Saturday.

Senior Martin Murphy continued to provide the crucial goals for Carolina, as he scored both goals in the win against the Hokies. Murphy, who has played intermittently as a starter and reserve in his first three college seasons, currently leads the team with four goals on the year.

A young Virginia side got its first taste of ACC action and with it, a first win in conference by beating Duke 1-0.

Six freshmen started the game for Virginia, as the team’s theme of youth continued through the season. But it was the experienced Will Bates, still coming in off the bench this season, who grabbed the winning goal in the 58th minute, his first of the season.

If it isn’t broke, don’t try and change too much.

That appears to be the approach of this year’s Charlotte team after last fall’s deep run in the NCAA Tournament. The team’s efficient style continues to pay off, as the 49ers won both games on its first major road swing of the season, a 3-0 win against Stony Brook and a 1-0 defeat of Kentucky in Lexington, KY.

"This was a wonderful road win," Charlotte coach Kevin Langan said after the win against Kentucky. "We played unbelievable team defense. We went on the road and recorded two straight clean sheets. Our first four games of the year we played free flowing soccer and today was more of a scrappy game. I am ecstatic that we found another way to win a game."

The 49ers face South Carolina in a mid-week matchup this Wednesday.