There’s no letdown to the drama of the Ivy League.

Once again, the automatic bid for this year’s NCAA Tournament spot is going to come down to the final day, with Brown, Cornell and Dartmouth all in the mix.

After last weekend’s action, it’s the Big Red holding the advantage, currently sitting in first place with a one-point lead over the Bears. That stands up after Cornell’s dramatic 2-1 overtime win over Dartmouth on Saturday. Forward Tyler Regan scored the game winner.

The news that Brown failed to beat Yale – drawing 1-1 on the day – means that Cornell sits poised for their first Ivy League title since 1995, provided that the Big Red secure all three points against Columbia next weekend. 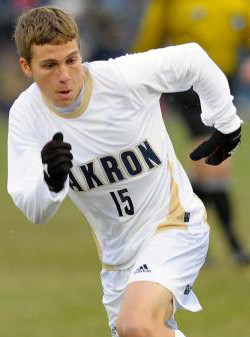 Meanwhile, Brown has to hope for a loss or tie and get the full points against Dartmouth this coming Friday, after outshooting Yale 36-15 last weekend.

"Tonight on senior night the guys played with a lot of conviction and heart," Brown head coach Patrick Laughlin said after the draw. "Unfortunately we allowed them to get an equalizer goal and we couldn't get a game-winner. We created a multitude of chances from a variety of play, and between the posts and their goalkeeper we couldn't find that second goal. It was a great effort tonight."

The Big East is making the rest of the country feel very blue.

The dominance of the quartet of teams in the Blue Division is one of the stories of the season, and those teams – Marquette, Georgetown, Notre Dame and Connecticut all backed up that notion by sweeping their way into the Big East semifinals.

None of the games were easy – the Golden Eagles jumping out to a two-goal advantage before holding on for a very tough 2-1 win over a determined Louisville side, Notre Dame erased a two-goal deficit on the way to a 4-2 defeat of Syracuse, while Connecticut snuck past Villanova 1-0. Georgetown needed a late goal from Brandon Allen to best St. John’s(m) 2-1 as well.

The win for the Hoyas secured their first Big East semifinal appearance since 2004, and first since the latter stages of the tournament were switched to Red Bull Arena.

"I'm really, really happy for the team," Georgetown head coach Brian Wiese said in a press release. "If you look at the quarterfinal field for this league, all eight teams are NCAA Tournament teams so it's great preparation for postseason. If you can win this league, you can win the whole thing. So if we had been in a different situation today and lost, there's no shame in it, but it would have been heartbreaking for the boys because getting to Red Bull is what they've been talking about all year."

The momentum continues to build for the now #1 ranked Akron Zips, as they clinched an unbeaten conference record in regular season MAC play once again, doing just enough to beat Western Michigan 1-0 on Saturday night.

Senior midfielder Scott Caldwell provided the game-winning goal with just five minutes left in the game to secure the hard earned victory against a difficult Broncos side.

In a battle of bottom-place teams in the ACC, Virginia Tech erased a 2-0 deficit, scoring three unanswered goals to advance to a quarterfinal matchup against top seed Maryland on Tuesday night.

"I thought we showed great character in coming back from two goals down to win. Now we get an opportunity to play No. 1 Maryland," Tech head coach Mike Brizendine said in a press release. "It’ll be the third time this season that we’ll face a No. 1-ranked opponent and the second time we’ll see Maryland here in College Park. We’re excited for the opportunity and know what to expect this time around.”

Both CAA quarterfinals needed overtime on Monday evening, as Hofstra and James Madison advanced through to the conference semifinals with a win on penalty kicks and an overtime winner respectively.

JMU, hosting UNC Wilmington, held a comfortable 3-1 lead in the second half, only to see the lead disappear completely thanks to David Sizemore's second goal of the evening in the 86th minute to tie it 3-3, setting up overtime. Five minutes into the first extra period, the Dukes pulled out the 4-3 win thanks to Dale Robins-Bailey.

The Hofstra-George Mason matchup was the antithesis of that goalfest, ending 0-0 after 110 minutes, focing penalty kicks. After the Patriots missed their first spot kick of the night, Hofstra went a perfect five-for-five to advance to the next round.